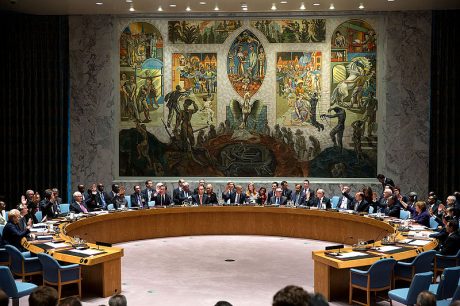 Is Barack Obama about to make the most catastrophic decision of his entire presidency? Former UN Ambassador John Bolton is warning that there is “a lot of speculation” over at UN headquarters right now about “resolutions that recognize a Palestinian state or that try and set a boundary for Israel based on the 1967 ceasefire lines”. Of course this would have to happen before the inauguration of Donald Trump on January 20th, because Trump has already made it quite clear that he will not support any UN resolution of such nature. Knowing that Trump is about to take office, advocates of the “two state solution” are putting an immense amount of pressure on Obama to support a UN Security Council resolution that would permanently divide the land of Israel while he is still in the White House, and at this moment we do not know what Barack Obama’s final decision will be.

Most Americans have no idea that this drama is playing out behind the scenes, but those in the know are very much aware of what is happening. The Wall Street Journal recently published an article entitled “Obama’s Israel Surprise?” that discussed the possibility of Obama supporting a UN Security Council resolution that would permanently divide the land of Israel, and the New York Times editorial board has formally endorsed such a resolution.

The rest of the UN Security Council is ready to agree to such a resolution, and at this point the only obstacle is getting Barack Obama’s approval. That is why it was so exceedingly alarming to wake up on Sunday morning and read former UN Ambassador John Bolton’s very chilling warning about what could soon happen at the UN. The following comes from an article on the website of The Hill…

Former United Nations Ambassador John Bolton warned Sunday that President Obama should not take any actions before leaving office that could hurt Israel at the U.N.

Bolton said during an interview with radio host John Catsimatidis that there is “a lot of speculation over in Turtle Bay at U.N. headquarters about resolutions that recognize a Palestinian state or that try and set a boundary for Israel based on the 1967 ceasefire lines.”

“I think that’d be very inadvisable for the president to do that,” he said.

John Bolton is still very tied in to the international community, and Donald Trump is reportedly actively considering asking him to serve as Secretary of State.

Needless to say, I would take what he is saying very, very seriously.

So what would this potential UN Security Council resolution look like?

1. It would give formal UN Security Council recognition to a Palestinian state for the very first time.

2. It would grant East Jerusalem to the Palestinians as the capital of their new state.

3. It would establish the 1967 ceasefire lines as the basis for final negotiations for borders between the two states.

Up until now, the U.S. government’s veto power on the UN Security Council has always blocked anti-Israel resolutions from passing, but earlier this year the Obama administration said that such a “parameters resolution” was now “on the table”.

And at this point we still don’t know what Obama is going to ultimately decide, but the Trump transition team is so concerned about this that they recently warned Obama “against making moves on the Israeli-Palestinian conflict in his last months in office”.

But no matter how much they object, the truth is that Trump and his team cannot actually do anything to stop Obama.

If Obama decides to betray Israel at the UN, it is going to happen.

And of course the Israeli government is extremely concerned about what might take place as well. According to the New York Post, the Israelis asked Secretary of State John Kerry if the Obama administration would promise to veto any anti-Israel resolutions at the UN for the remainder of Obama’s term, and Kerry flatly refused to make such a promise…

Israel faces a unique window of danger from Nov. 9 to Jan. 20: What might President Obama do in his final days in office to slam the Jewish state?

Start with Secretary of State John Kerry’s recent flat refusal to promise a US veto on any upcoming anti-Israel resolution in the UN Security Council.

On Saturday, Haaretz reports, Prime Minister Benjamin Netanyahu told Kerry he’s counting on Washington to stick to its policy of nixing anti-Israel resolutions. Kerry’s reply: The administration has yet to make a decision on the matter.

Perhaps equally as alarming is what Obama told the Palestinians. In October, Obama reportedly told them to wait until after the election for any action at the UN Security Council…

On the surface, the latest message to the Palestinian Authority from the Obama administration is no different from the past two decades of American policy: the U.S. will veto any resolution attacking Israel or demanding Palestinian independence without them first making peace with the Jewish state. But, as Haaretz reported, there was one significant caveat to the warning. They were told not to push for any such resolution until after the presidential election next month.

So why would it be so catastrophic if Obama decides to support a UN Security Council resolution that permanently divides the land of Israel?

Well, John Kilpatrick, Shane Warren, Bob Jones and many others have warned that when we divide the land of Israel, our land will be divided too.

Whether it is Barack Obama, Donald Trump or some other president that does it, someday this will happen.

And when this happens, the floodgates will open and judgment after judgment will hit this nation. I have warned about many of these events in my latest book, and I hope to write much more about what is coming in the months ahead.

If we can get to January 20th and Donald Trump is peacefully inaugurated and the land of Israel has not been divided, perhaps we can all breathe a little bit easier for a while.

But if the land of Israel is divided between now and then, the consequences for this nation are going to be more severe than most people would dare to imagine.