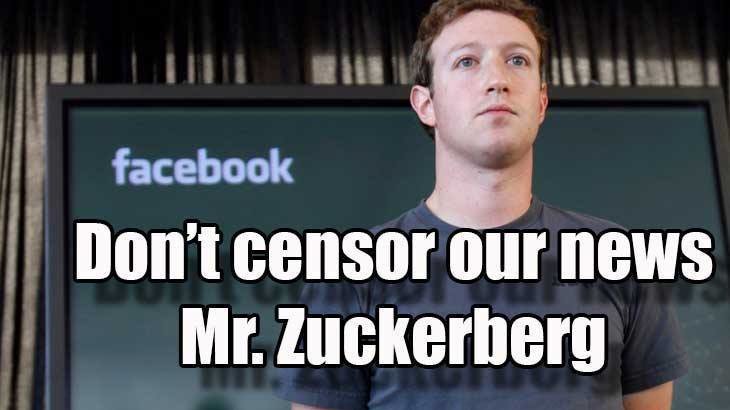 In the wake of Hillary Clinton’s loss to Donald Trump in the U.S. presidential election, Facebook has been targeted by behind the scene oligarchic forces (George Soros/Media Matters) and their respective government representatives, such as President Obama, as being partially responsible for the outcome of the election through the spread of misinformation.

Since the election, there has been a push to have Facebook censor “fake news” as forwarded by controversial social justice warrior professor Mish Zimdars, who released a “fake news” list that featured “False, Misleading, Clickbait-y, and/or Satirical ‘News’ Sources.” The problem is that only two of those modifiers suggest actual fake news —”false” and “satirical.” The other two words are judgment calls that we make, ourselves, as informed readers.

And while many people welcome the censoring of clearly fallacious new stories, there is an insidious nature in the manner in which ideologically based news sites have been lumped in with satire and false news.

There is a clear and present danger of a massive censorship regime that includes legitimate, ideologically based, news content on Facebook — an extremely slippery slope to traverse once venturing down the path of stifling the free flow of information.

Many of the sites listed on Zimdars’ list, which was widely distributed across mainstream corporate media, are not “fake news,” but rather ideologically based sites that analyze facts through their unique lens.

These sites, such as Breitbart, Zero Hedge, The Other 98% and us, here at The Free Thought Project, span the political spectrum from right to left. However, the one common thread they all share is that they provide a perspective outside of the mainstream interpretation of actual events that have transpired.

So in an environment where “fake news” is policed by third parties that rely on expert analysis, we could see ideologically driven posts from outlets censored entirely because they’re lesser known or smaller, while larger news sites get a pass on spreading heavily ideological opinion pieces. So a decision by Facebook to censor “fake news” would heavily weigh in favor of the more mainstream and “powerful” traditional media outlets.

What you are actually seeing transpire is a concerted effort by those in control of the media/state apparatus to regain control of the distribution of information shared within society, as the traditional gatekeepers of information have lost that control, due to social media, and can thus no longer control and shape the informational narrative as effectively.

Throughout this election cycle, it was these independent/non-corporate media outlets that reported on WikiLeaks, as the corporate media simply ignored the daily revelations contained in the DNC and Podesta emails. And while the old media dinosaurs toed the line — forwarding essentially only government approved news — the alternative media blew the doors off the election campaign by reporting on a continuous stream of damning revelations released by the transparency organization.

Essentially, U.S. mainstream corporate media has been weaponized as a means of controlling public opinion by propagandizing the American people. World renowned academic Noam Chomsky, in his book “Manufacturing Consent: The Political Economy of the Mass Media,” detailed how U.S. media frequently serve as an errand boy for U.S. corporate, military and imperial interests.

Chomsky forwarded the concept of what he labeled the “propaganda model.” Although the book was written in 1988, it speaks precisely to what is currently taking place and clearly revealed in the Podesta emails.

One need only look at China’s policy of “Harmonizing” the internet to understand where this type of activity ultimately leads. In 2004, the Chinese Communist Party announced the goal of constructing a “Harmonious Society,” which underpins the Chinese government’s Internet censorship regime. China now employs over 2 million people to monitor and censor online content.

While in an authoritarian state, such as China, direct force can be applied to control the direction of society and peoples’ actions (government censors), in a Western democracy, as Chomsky notes, it’s the narrative of information fed to the public that informs peoples’ perspectives which typically keeps the population in control.

Mr. Zuckerberg, we implore you to not implement a Chinese-style censorship regime on Facebook, and to allow the continued free flow of information that underpins the fabric of American democracy. Please do not let your platform be the government proxy for state censorship!