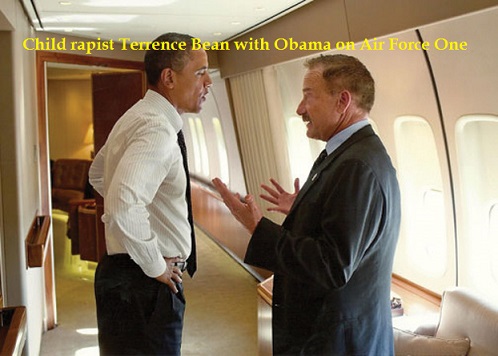 A “bundler” is someone who not just donates money to a politician or political campaign, but solicits and “bundles” donations from other donors into a substantial sum. As such, bundlers perform an important service for politicians.

If a “bundler” for Trump is arrested for pedophilia, it would be all over the MSM, aka the Fake Media.

Well, there is a bundler for Obama who has been arrested for just that. But instead of reporting this, the New York Times devoted its resources to publishing a long article to debunk rumors and claims in the Alternative Media that a D.C. pizzeria named Comet Ping Pong is a hub for pedophiles. (More on the pizzeria in a post to come.)

Brett M. Decker reports for USA Today that on Nov. 16, 2016, Portland, OR police arrested Bean on two counts of felony for having sex with a 15-year-old boy last year. Given the age of the victim, a minor, that makes it rape.

The next day, Bean’s former boyfriend, 25-year-old Kiah Loy Lawson, was also arrested for sexual abuse of the same 15-year-old boy. After the relationship between the two men had ended, Lawson went public with claims that Bean had a practice of secretly videotaping himself having sex with others.

Bean is a big-money Democratic donor and liberal political activist with connections inside the Obama White House, having raised more than a half-million dollars for Obama’s 2012 re-election campaign. Photos of Bean posted online show him flying on Air Force One with Obama.

The Federal Election Commission’s campaign-finance database shows that Bean has donated thousands of dollars every election cycle to the Democratic Party’s most powerful leaders, including Hillary and Bill Clinton, Senate Majority Leader Harry Reid, Sen. Dick Durbin, and Rep. Barney Frank, among others.

As described by oregonlive.com, “Bean has been one of the state’s biggest Democratic donors and an influential figure in gay rights circles in the state. He helped found two major national political groups, the Human Rights Campaign and the Gay and Lesbian Victory Fund and has been a major contributor for several Democratic presidential candidates, including Barack Obama.”

“This story was first reported by the local press, and there have been vague references to sexual trouble for Bean and Lawson since June, but the national media has not picked it up. That oversight is politically convenient for President Obama as he tries to pull off one of his riskiest political moves ever with his amnesty executive order.

If one of President George W. Bush’s bundlers would have been charged with child rape, make no mistake about it, the media feeding frenzy would have been uncontrollable – which would be legitimate given the severity of the allegation. The silence surrounding Terrence Bean exposes the national media’s partisan double standard in obscene detail.”

Thank you, Brett Decker for reporting the truth!