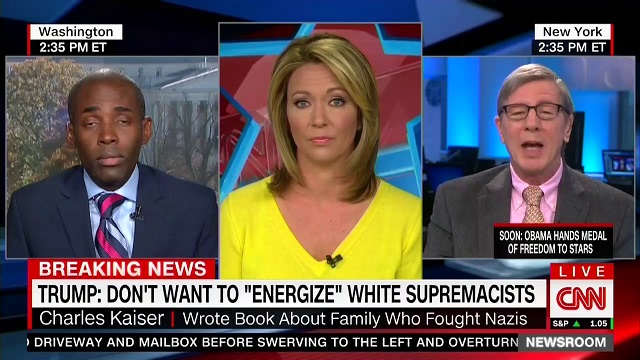 Kaiser said, “I’m delighted that Mr. Trump has visited my alma mater at The New York Times and said he doesn’t want to do this anymore, but I want to give him a little advice for the future if he does not want to stimulate the alt-right. First thing, he should never retweet someone with the name ‘White Genocide’ who lists his dress as Jew America. that’s what he did in February. he should never ask his supporters again to give the Nazi salute, which he did at a rally in March. That’s not a good idea.”

“And then of course in July he retweeted an image of his opponent with the six-pointed Jewish star on it,” he continued. “I thought that was a mistake, but we have bigger problems here. also in July, you know, he selected as his vice president the most homophobic man in American public life, a person who believes that gay people actually do not have the right too exist, and then, if you don’t want to support the alt-right, don’t choose as a White House Counselor a man who uses the word n*gger, whose wife says that he did not want his daughters to go to a school with too many Jews, and don’t choose as an attorney general a man who calls the NAACP an un-American organization and who we learned in The Guardian today went so far as to prosecute –.”

Anchor Brooke Baldwin then asked Kaiser not to say the “n-word” on her show.

Later on, Kaiser told Paris Dennard it was “shameful” that any African-American would support Jeff Sessions for attorney general.

At the end of the segment, a visibly upset Baldwin sharply criticized Kaiser for using the n-word, and said that “the claim that Mr. Bannon used the n-word — I’ve never heard of this. So, there’s that.”

Here’s Baldwin’s comments from the end of the segment:

In the world of CNN and their ctrl-left contributors, Donald Trump literally orders his followers to do “Nazi salutes” at his rallies and Steve Bannon is an “avowed white nationalist” who throws around the world “n*gger.”

We’re witnessing the total implosion of the lying media.

This is why Trump allegedly told CNN chief Jeff Zucker at a private off-the-record meeting with the press: “I hate your network, everyone at CNN is a liar and you should be ashamed.”