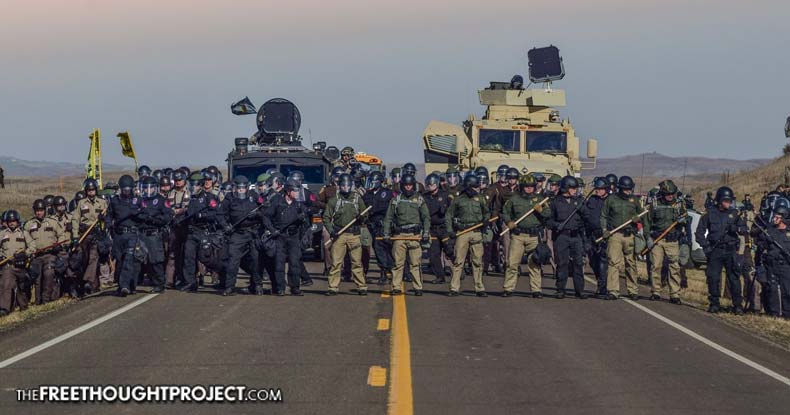 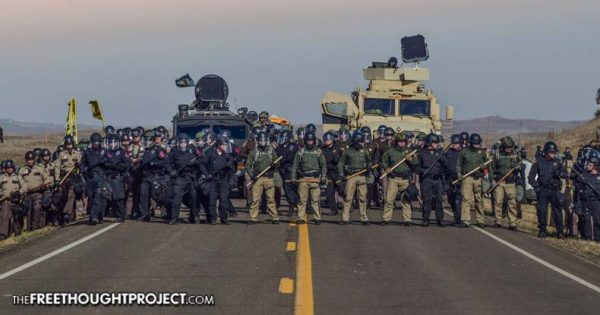 In a shocking development that can’t possibly end well, the Army Corps of Engineers will be evicting everyone from Corps-managed land north of the Cannonball River on December 5 — just one day after a delegation of veterans plans to arrive to defend Standing Rock Sioux water protectors and their supporters opposing construction of the Dakota Access Pipeline.

“Pursuant to 36 C.F.R. § 327.12, I am closing the portion of the Corps-managed federal property north of the Cannonball River to all public use and access effective December 5, 2016. This decision is necessary to protect the general public from the violent confrontations between protestors and law enforcement officials that have occurred in this area, and to prevent death, illness, or serious injury to inhabitants of encampments due to the harsh North Dakota winter conditions. The necessary emergency, medical, and fire response services, law enforcement, or sustainable facilities to protect people from these conditions on this property cannot be provided. I do not take this action lightly, but have decided that it is required due to the concern for public safety and the fact that much of this land is leased to private persons for grazing and/or haying purposes as part of the Corps’ land management practices. To be clear, this means that no member of the general public, to include Dakota Access pipeline protestors, can be on these Corps’ lands.”

Although the Corps so graciously established what is laughably termed a “free speech zone” south of the Cannonball River, the letter makes undeniable the fact it plans to evict everyone from the camps already in place.

However, the Army Corps of Engineers flagrantly ignores it has been the actions of the Morton County Sheriff’s Department and hundreds of officers from at least five states which have continually endangered water protectors by escalating violence whenever possible.

Were the Corps not clearly motivated to protect only Energy Transfer Partners — the company responsible for construction of the pipeline — over the rights of Native Americans who have been exploited in the matter, Henderson would be sending a letter to law enforcement stating police actions have crossed the line are risking literal life and limb.

“As I have publically stated, I am asking you, as a Tribal leader, to encourage members of your Tribe, as well as any non-members who support you who are located in the encampments north of the Cannonball River on Corps’ lands to immediately and peacefully move to the free speech zone south of the Cannonball River or to a more sustainable location for the winter. I am genuinely concerned for the safety and well-being of both the members of your Tribe and the general public located at these encampments.”

That concern, given the circumstances, is little more than a hollow token — obligatory before a wildly unpopular decision has been made that will affect the lives of thousands at the camps.

“Our Tribe is deeply disappointed in this decision by the United States, but our resolve to protect our water is stronger than ever. We ask that all everyone who can appeal to President Obama and the Army Corps of Engineers to consider the future of our people and rescind all permits and deny the easement to cross the Missouri River just north of our Reservation and straight through our treaty lands. When Dakota Access Pipeline chose this route, they did not consider our strong opposition. Our concerns were clearly articulated directly to them in a meeting on Sept. 30, 2014. We have released that audio recording from our council meeting where DAPL and the ND Public Service Commission came to us with this route.

“We ask that the United States stop the pipeline and move it outside our treaty lands.

“It is both unfortunate and ironic that this announcement comes the day after this country celebrates Thanksgiving – a historic exchange of goodwill between Native Americans and the first immigrants from Europe. Although the news is saddening, it is not at all surprising given the last 500 years of the treatment of our people. We have suffered much, but we still have hope that the President will act on his commitment to close the chapter of broken promises to our people and especially our children.”

Consideration must be given to what might occur when the Army Corps — likely backed by the National Guard and multiple heavily-militarized law enforcement agencies — moves to physically clear the encampments.

Water protectors have an established policy of nonviolence, to which they strictly adhere and expect all supporters to follow, but to evict that many people who have dedicated their lives to stopping pipeline construction — and who have announced they would be willing to die in order to do so — will be quite the confrontation.

None of the details for how the Army Corps plans to effect this mass eviction were evident in the brief letter — but to imagine water protectors willingly giving up their massive campaign against Dakota Access and just pick up and move to a designated area is laughable at best.

On December 5, the whole world will be watching to see how the U.S. government handles itself in an action directly affecting Indigenous peoples whose only goal is to protect the water from contamination — because that track record isn’t exactly good.

America’s Frontline Doctor Challenges CONVID Narrative – Gets Arrested For No...

New Twitter CEO bans the sharing of any photos and videos...