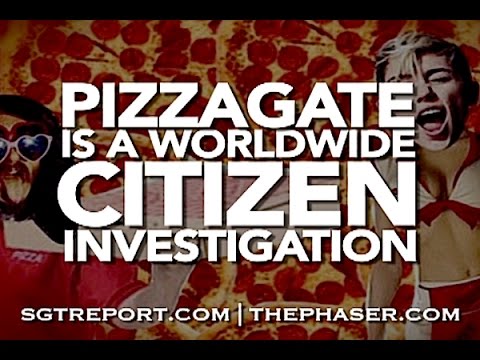 The Pizzagate scandal is the latest news to be broken by Wikileaks. It’s real. It’s disgusting. It’s criminal. It’s nothing more than predatory pedophiles in high positions using code words for ordering a pizza to refer to wanting to engage a child in sex, and it looks like Hillary Clinton’s campaign manager’s brother was right in the middle of it, along with Thalemic Spirit Cooking advocate Marina Abromovic. Now, many web sites and social media are being censored for reporting on the subject.

Remember when Julian Assange was leading America down the road of the corruption at the heart of the Clinton Foundation? Well, this is what he was going after. He was trying to make the American people aware of the depravity of those who represent them.

Infowars gives a brief synopsis of what took place and how it could be understood, including the symbolism, which is taken directly from unclassified FBI documents that list symbols and logos used by pedophiles to identify sexual preferences.

Keep in mind, this is the same agency, whose director confirmed that Hillary Clinton broke the law, but would not recommend she be prosecuted for her crimes. We know James Comey has ties to Clinton Foundation donors, which has amassed him seven figures. Could it be that Mr. Comey is trying to keep something else like Pizzagate from coming out?

Infowars reported, “The Rosetta Stone was needed next. A Verification that high level Washington D.C. Predatory Pedophiles were using a code to communicate child sex trafficking as casually as ordering a pizza. All hidden in plain view.”

“The FBI has long known the symbols pedophiles are using to operate,” the report continues. “An FBI Unclassified document from WikiLeaks reveals ‘Symbols and Logos Used by Pedophiles to Identify Sexual Preferences…. to include those who sexually abuse children as well as those who produce, distribute, and trade child pornography, are using various types of identification logos or symbols to recognize one another and distinguish their sexual preferences. To specifically indicate the pedophile’s gender preference, members of pedophilic organizations encourage the use of descriptions such as ‘boylove,’ ‘girllove,’ and ‘childlove.’ These symbols have been etched into rings and formed into pendants, and have also been found imprinted on coins. Investigators should also be attentive to pedophilia symbols advertised on Web sites. During examinations of computer files, investigators should be conscious of subjects who try to conceal child pornography by labeling them with symbols instead of the typical suggestive explicit names.”

Additionally, it was discovered that Andrew Kline is the owner of Besta Pizza, whose corporation is Uptown Pizza. In an article from Vanity Fair in 2011 (archived copy) Kline is identified.

The person who made the discovery said he was “not directly accusing Andrew of anything,” but simply wanted these facts made known

We are also seeing some censorship taking place on reports on Pizzagate. Mac Slavo of SHTFPlan.com writes, “The evidence is now overwhelming – whatever the full truth of the matter, something is very, very suspicious about the “pizza code” that has been discovered in the leaked Podesta emails that many believe is connected to a ring of pedophilia activity. Independent researchers have been scouring the web for supporting information, and have pieced together a disturbing pile of circumstantial evidence connecting many of DC’s most powerful to lewd comments, references to illegal sex acts and child trafficking, dark art and more. It is very likely that this could go to the very top, where powerful people are protected by people with ranking positions inside the power structure.”

“Perhaps that is why many channels and researchers are meeting censorship, threats and bans,” he added. “Reddit’s thread on the topic, which was quickly becoming the definitive gathering place for the information, was shut down. Meanwhile, the entire The Daily Sheeple website was shutdown temporarily over a copyright claim about an image in “pizza gate” story (see video at bottom). Numerous YouTube accounts have been suspended or blocked as well. Read more: The Disturbing, Disgusting Pedophile Code Hidden in the John Podesta Emails.”

Slavo then introduced a video from SGT Report on the “scrubbing” of social media accounts and censoring of websites.

“While the NY Times tries to soft peddle #PizzaGate, Reddit tries to kill the Sub-Reddit investigation and Twitter attempts to censor breaking news on the global pedophile ring – it’s too late. The genie is out of the bottle. We will not be stopped. Truth will be revealed. Because #PizzaGate is a WORLDWIDE CITIZEN INVESTIGATION NOW. And the pedos are running scared.”

Take a look for yourself and see if this might be, in part, the reason for going after outlets and labeling them as “fake news” that seriously question and attempt to bring to the light things the mainstream media won’t touch with a ten foot pole.

And then there is this.