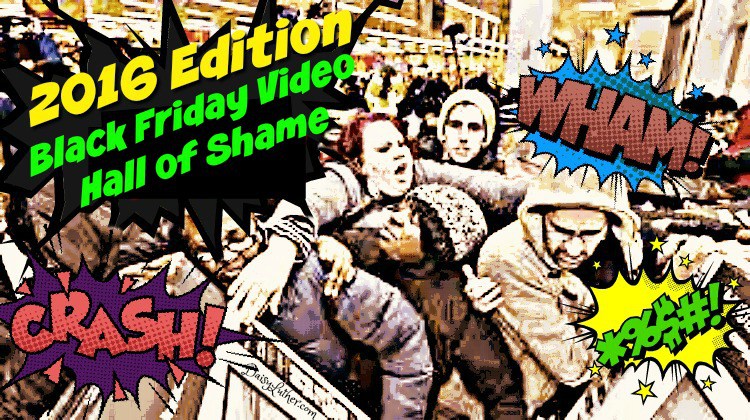 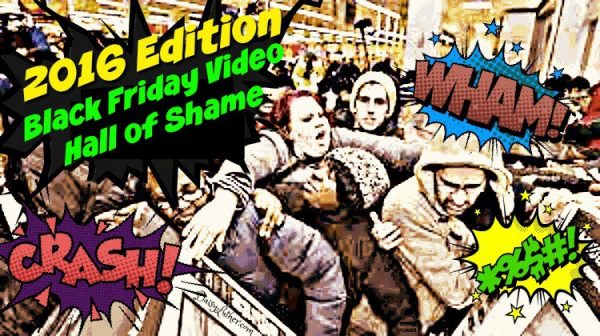 Every year, people across the country begin the season of holiday joy by pushing, shoving, and trampling their fellow man for a toaster and this year has been no exception. Seriously, America. Nothing says dignity  and civility like coming to blows over a pack of toilet paper. As usual, it seems that the worst shenanigans took place at Wal-Mart stores across the country.

Sadly, the shopping extravaganza turned deadly for some before the doors even opened.

As always, let me be the first to remind you that if our country was in a situation where these people were actually hungry and you had the only sandwich, you’d want to be well-armed. As it is, they seem to mostly be focusing on big-screen TVs to better allow the predictive programming and subliminal messages to replace any possibility for critical thought. Be smart. Stay home and check out these 3 epic deals that I’m offering instead!

Here it is, that moment you’ve all been waiting for, the 2016 Edition of Black Friday Stampedes and Fisticuffs. Check back throughout the day for more holiday mayhem.

“I saw it first!” – Deadly Shooting Over a Parking Space at Wal-Mart

Thursday night, a 33-year-old man was shot and killed in a dispute over a parking space at a busy Wal-Mart in Reno, Nevada. The shooter has been arrested. (source)

Holiday Montage of Trampling and Fighting

In this video montage, people trample their fellow shoppers, throw punches, and aggressively seek the best deals, even if another patron had the merchandise in hand.

Watch as shoppers, desperate to grab every towel they can get their hands on, snatch merchandise right out of the hands of other shoppers

In Atlantic County, New Jersey, two people were shot multiple times while waiting outside of a Macy’s store for the mall to open. A bullet-riddled SUV remains in the parking lot surrounded by shell casings. (source)

Scrapping it out at the mall in Fairfield, California

YouTube tells us this video was posted from Fairfield California. People are not even fighting over merchandise. They’re just fighting.

The pace was frantic at the Wal-Mart store, with grabbing, snatching, running, and screaming.

Go Hard or Go Home at Wal-Mart and Target

There’s no sound to this video, but I’m pretty sure the visuals are sufficient to portray the brawls going on at your favorite discount stores today.

Cursing, Fighting, and Running Over the Slow People with Carts

The scene was tense at an unnamed Wal-Mart. Lots of people were recording video in the hopes of capturing that next viral YouTube moment. Listen to the way shoppers are speaking to one another. “B*tch.” Wow, I’m so glad we’re in a civilized society.

At yet another Wal-Mart, watch these two women come to blows over a television. Then watch as a guy swoops in and snatches it away from both of them.

Get Out of This Guy’s Way

Watch out for the dude in the red and gray coat, because he will TAKE. YOU. DOWN. Heck, he even backtracked to smack the daylights out of some people.

People Laugh Maniacally While Watching a Fight in Houston

Warning: Plumber’s Crack Alert. Listen in the background to spectators laughing while shoppers duke it out for merchandise. Sorta like the entertainment at the Roman Coliseum, but starring The People of Wal-Mart.

The UK seems to have been infected with the madness. Check out the top ten worst moments in British Black Friday shopping. It kind of blows my mind that they watched us and said, “Wow, that looks great! Let’s go beat people up for toilet paper!”