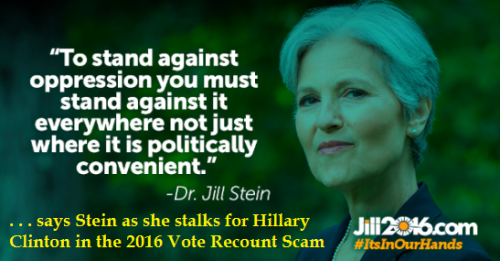 She had the lying MSM working for her.

She had polls rigged for her.

She had dead people voting for her.

But you didn’t think Hillary “Why aren’t I 50 points ahead?” Clinton would give up so easily, did you?

Trump and Russia hacked the election!

Why those three states?

Because, according to a Nov. 22 report in New York magazine, “a group of prominent computer scientists and election lawyers” — including voting-rights attorney John Bonifaz and director of the University of Michigan’s Center for Computer Security and Society J. Alex Halderman — “believes they’ve found persuasive evidence that results in Wisconsin, Michigan, and Pennsylvania may have been manipulated or hacked. The group is so far not speaking on the record about their findings and is focused on lobbying the Clinton team in private.” In an article on Medium.com, Halderman claims that “a foreign government” could have hacked the election because of “suspicious patterns in voting results in Wisconsin,” which other data experts say can be explained away by education and race variables.

There’s only a 107,000 combined vote margin separating Trump from Hillary in Wisconsin, Pennyslyvania and Michigan.

But it would be unseemly for Queen Hillary to demand a vote recount, although her lawyer Marc Elias coyly says the Queen will “participate” in vote recounts even though (1) she hasn’t found “any actionable evidence of hacking or outside attempts to alter the voting technology”; and (2) she doesn’t expect to overturn the election of Donald Trump as president. But she’s participating in vote recounts anyway because she just wants “to ensure the process proceeds in a manner that is fair to all sides” — which is just so noble of Queen Hillary that I’m moved to tears!

So Green Party candidate Jill Stein will be Hillary’s stalking horse. The same Jill Stein who got zero Electoral College vote and a paltry 1.04% of the popular votes (or 1.39 million votes) in the 2016 presidential election. All of which makes complete sense that Stein is contesting the election results by demanding a recount of votes in those battleground states. /sarc

To recount millions of votes, Stein will need money, lots of money.

“Stein and her running mate, activist Ajamu Baraka, had set a deadline of Friday, November 25 at 4 p.m. to reach the fundraising goal, as the $1.1 million required for filing in Wisconsin will be due on that date. In Pennsylvania, the Stein/Baraka campaign needs $500,000 by November 28. An additional $600,000 is needed to file in Michigan by that state’s November 30 deadline. An additional amount of $2-3 million will be needed for legal fees.“

Jill Stein made her intentions known on her Facebook page around 4 p.m. Wednesday afternoon, Nov. 23. By this afternoon (Nov. 26), Stein has raised more than $5.8 million, with the goal now upped to $7 million. See for yourself at Jill2016.

In other words, in just 3 days Stein raised $5.8 million, all by crowd funding! The same Jill Stein who was the only candidate on the November ballot to rely on public money — four federal payments totaling $456,000 under the Presidential Election Campaign Fund — for her own failed presidential campaign.

So who are these millions of Americans who are donating to Stein’s vote recount war chest?

As in robots. Machines. Not real people.

How do we know this?

Because the donations came in and are still coming in in REGULAR intervals — even at 3 a.m. when most Americans are asleep.

“JILL STEIN’S ELECTION RECOUNT IS BEING PAID FOR BY A BOT! A bot is pulling cash from a central fund, and giving it out at a pre determined rate. Go to Jill Stein’s fundraiser page and watch the progress. You will see that her funding is coming in at a PERFECTLY CONSISTENT 160,000 an hour. I watched this yesterday and last night carefully, and noted that at night, when everyone is sleeping and right through the time when the whole world slows down, her donations for this came in like clockwork, with no deviation from the steady pace whatsoever. The only way that can happen is if a bot was set up to fake her getting donations from multiple people, and whoever set it up did not consider the fact that practically everything would come from America, and practically everyone is asleep at 3AM. LAST NIGHT IT SHOULD HAVE SLOWED DOWN. IT DID NOT. IT JUST MARCHED RIGHT TOWARD THE FINISH LIKE AN OBEDIENT SOLDIER. It went straight to 2.65 million by six AM. I can calculate: IT WILL GO TO 4.5 MILLION IN 28.125 HOURS. Oh, a few people will pitch in for real, so I’ll say 27 hours . . . . Yes folks, we are watching the election steal as it happens. They could not do it by threatening electors, so now we have this. And it is all based on false claims, because Michigan CANNOT BE HACKED. Michigan has a CERTIFIED [paper] VOTE. There is NO WAY THIS IS LEGIT. And that means ONE THING – there are liars doing it, powerful liars who know in advance they are going to find what they are looking for.”

Friday, the Wisconsin Elections Commission said it had received Stein’s petition for a recount.