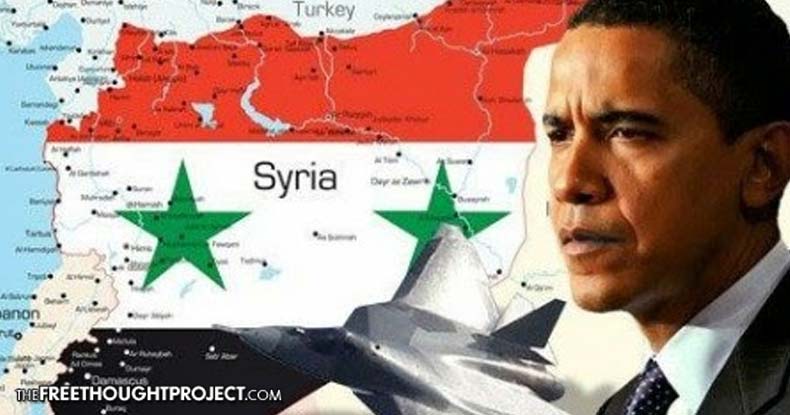 Hillary Clinton’s loss was a shock to the purveyors of U.S. military hegemony, who saw in her an easier path to keep the Syria conflict going. Secretary of State Clinton was instrumental in the early days of Syria intervention, in 2010 making a series of demands for Syria to get in line behind the U.S. vision for the Middle East.

When Bashar al-Assad refused to roll over, regime change became the talking point of Washington think tanks and mainstream media echo chambers. Clinton promised during her campaign to ramp up action in Syria, to the delight of the same neocons who brought the Iraq invasion. She acknowledged that many civilians would die if the U.S. set up a no-fly zone.

Establishment of a no-fly zone is the next crucial step toward full-scale war. It would mean Syrian planes could not fly in their own airspace and would bring the disturbing prospect of U.S. planes shooting down Russian planes — which are operating there on invitation from Syria to help battle ISIS.

Soon after the presidential election, key warmongers in Congress began formulating plans to make increased conflict a near certainty, complete with the kind of propaganda peddled before the Iraq attack. While everyone was distracted by the election of Trump, six representatives took advantage of the lame-duck session and suspended “normal rules” to bring us H.R. 5732.

The Caesar Syria Civilian Protection Act of 2016 includes Section 303, titled: Assessment of potential effectiveness of and requirements for the establishment of safe zones or a no-fly zone in Syria.

As reported by Consortium News:

“Late in the day, on Nov. 15, one week after the U.S. elections, the lame-duck Congress convened in special session with normal rules suspended so the House could pass House Resolution 5732, the “Caesar Syria Civilian Protection Act” calling for intensifying the already harsh sanctions on Syria, assessing the imposition of a “no fly zone” inside Syria (to prevent the Syrian government from flying) and escalating efforts to press criminal charges against Syrian officials…

Most strikingly, the resolution calls for evaluating and developing plans for the United States to impose a “no fly zone” inside Syria, a sovereign nation, an act of war that also would violate international law as an act of aggression. It also could put the U.S. military in the position of shooting down Russian aircraft.”

The suspension of rules procedure is supposed to be used for “non-controversial” bills such as naming Post Offices, but this small group of lawmakers used it to pass a drastically important bill. The blatant abuse of power shows the desperation in the neocon ranks.

Donald Trump has spoken out against regime change, but considering his unpredictable behavior, the actual position of his coming administration is anybody’s guess. Trump’s pick of Lt. Gen. Michael Flynn as national security adviser is not a good portent.

Earlier this month, Flynn strongly supported Turkish President Erdogan in an op-ed at The Hill, suggesting he is under siege by “radical Islam” and desperately needs our help. Flynn seemed to dismiss Erdogan’s crackdown on political dissidents and the dubious circumstances of the attempted coup which allowed Erdogan to solidify his power.

It may be no coincidence that just days ago, Turkey — a NATO ally — urged to U.S. to move forward with a no-fly zone in Syria. Incidentally, no one seems to have paid attention to a damning investigative report finding that the “Turkish government under President Erdogan is covertly providing direct military, financial and logistical support to ISIS, even while claiming to fight the terror network.”

While both Russian and U.S. bombings have resulted in civilian deaths, completely missing in the Western narrative on Syria is how U.S. intervention in the interest of regime change was the catalyst for today’s hellish conditions in that country, and the resulting flood of Syrian refugees.

As we have reported before, the Pentagon nurtured the Salafist sect in eastern Syria — to help the U.S. and its allies achieve regime change – and these extremists went on to become the violent terror group called ISIS.

In order to keep the American public ignorant of reality in Syria, and to maintain the specter of terrorism in order to justify massive military spending, politicians’ propaganda must be so complete they believe it themselves.

This was demonstrated during the 40-minute “debate” session among the six lawmakers who pushed the bill through.

They claimed the Obama administration has been “sitting back and doing nothing” as violence worsens, and Assad is “killing millions of his citizens.” All of this is, of course, false.

“By late 2011, the U.S. was actively coordinating, training and supplying armed opposition groups. When Muammar Gaddafi’s Libyan government was toppled in fall 2011, the CIA oversaw the diversion of Libyan weapons to the Syrian armed opposition, as documented in the Defense Intelligence Agency report of October 2012.

These weapons transfers were secret. For the public record, it was acknowledged that the U.S. was supplying communications equipment to the armed opposition while U.S. “allies” — Saudi Arabia and Qatar — were supplying the weaponry. This is one reason that Saudi purchases of weapons skyrocketed during this time period; they were buying weapons to replace those being shipped to the armed opposition in Syria. It was very profitable for U.S. arms manufacturers.

Huge weapons transfers to the armed opposition in Syria have continued to the present, with the U.S. government even more directly involved. This past spring, Janes Defense reported the details of a U.S. delivery of 2.2 million pounds of ammunition, rocket launchers and other weaponry to the armed opposition.

So, the political claims that the U.S. has been inactive are baseless. In reality, the U.S. has done everything short of a direct attack on Syria. And the U.S. military is starting to cross that line. On Sept. 17, the U.S. air coalition conducted a series of airstrikes on the Syrian Army in Deir Ezzor, killing 80 Syrian soldiers and enabling ISIS to launch an attack on the position. Claims that it was a “mistake” are highly dubious.”

In no way is this downplaying the significance of these horrible deaths at the hands of warring forces. But it is extremely important to point out the highly exaggerate claims of U.S. politicians in their push to bring even more death and destruction to Syria.

The Friends Committee for National Legislation analyzed House Resolution 5732 and found it would make a peace agreement more difficult, not less.

Any peace agreement that leaves Bashar al-Assad in power would be seen as a failure of U.S. hegemonic foreign policy, which has pushed regime change for years. It would also be seen as a victory for Russia, which is helping Assad fight ISIS and U.S.-funded “moderate rebels” attempting to overthrown Assad.

Even the title of the resolution — ‘Caesar Syria Civilian Protection Act’ – is based on a CIA-funded propaganda hoax involving alleged torture photos that was used to sabotage a 2014 effort at peace negotiations.

Unsurprisingly, the Israel lobby is campaigning for the passage of HR5732, as Israel is officially at war with Syria and continues to illegally occupy the Syrian Golan Heights. Removing Assad would make things easier for Israel to permanently seize this fossil fuel-rich area, and would strike a blow to its perceived enemies in Lebanon and Iran.

Despite the grave ramifications of HR 5732, the media is silent. The media outlets now professing to hold the monopoly on real journalism have not said a word about the shocking abuse of “suspended rules” in the House, and the utter propaganda being spewed out by lawmakers, to save their crusade for regime change in Syria — even if it means World War III.