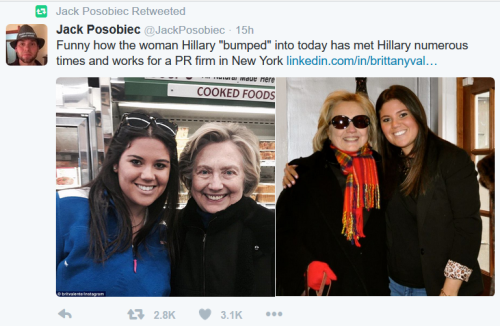 On the day before Thanksgiving, Nov. 23, 2016, Hillary and Bill Clinton went shopping for groceries at a supermarket in Chappaqua, NY.

As recounted by Daily Mail (and a slew of other media outlets), Hillary “appeared in great spirits as she was spotted shopping for Thanksgiving supplies at a supermarket in Chappaqua, where she and husband Bill have a home, by a number of fans on Wednesday. The 69-year-old happily took selfies with a number of women who approached her as she shopped.”

One of the women was Brittany Valente, who posted a selfie with Hillary on Instagram. That caught the attention of the MSM.

Valente gushed to NBC News that Bill was “busy looking at cheese” while Hillary took pictures with everyone who asked for one:

“They were so relaxed and shopping for Thanksgiving dinner at the local village market. They were so nice talking to everyone, wishing them happy holidays and at one point Hillary said ‘We must stay strong together no matter what. Thank you for your support.”’

A day after Valente had posted the pic to Instagram, it disappeared. If you go to her Instagram link, you now get the message:

That’s because Valente, who describes herself as “New Yorker, Foodie, Marketer,” changed her Instagram account to private.

Valente also took an 8-second video of the Clintons:

.@HillaryClinton and @BillClinton preparing for their own Thanksgiving dinner! (h/t Brittany Valente) pic.twitter.com/dgxIUzmUyn

I can confirm the following:

However, what is disingenuous on the part of Valente is that she gave the impression that she was a stranger who just happened to chance upon the Clintons in the local supermarket. Here’s Valente’s conversation with a friend on her now-deleted Instagram post:

britvalente: “Ran into Hill and Bill at the local market. Met their grandson Aiden, cutest little guy ever. #hillaryclinton”

ohsnapitsxanna: “This would happen to you!“

Just like Margot Gerster who, a day after the historic 2016 election, also “accidentally” ran into Hillary and Bill hiking in the woods of Chappaqua. (See “FAKE! – Woman’s ‘chance’ meeting of Hillary Clinton hiking after election”)

Oddly, neither Valente nor Gerster made any mention of the Secret Service agents who are with the Clintons wherever they go. Nor did Valente and Gerster include the information that both have known Hillary for years, as seen in other pics of them with Hillary. Here’s one of Valente with Hillary (photo on right, below):

On her LinkedIn page, Valente says that since 2013 she’s worked in marketing at the Convene Conference Center company in the “Greater New York City Area”.

Headquartered in Manhattan, NY, Convene provides “120+ meeting spaces across 10 locations in 3 cities” — New York, Philadelphia and Metropolitan Washington, D.C. — for companies that include Facebook, Goldman Sachs, Google, and Microsoft. This is how Convene describes itself on its Facebook page:

Convene’s young (late 20s to early 30s) co-founders are Ryan Simonetti and Christopher J. Kelly who, respectively, are the company’s CEO and President. Whereas Kelly has no politicians among the people whom he “follows” on Twitter, Simonetti “follows” Hillary Clinton, Bill Clinton, Barack Obama, former NY mayor Mike Bloomberg, and Mitt Romney.

Given Convene’s New York and D.C. locations, as well as the services the company provides, it is not hard to imagine that Convene has done business with Hillary’s presidential campaign and with the Clinton Foundation. Among Brittany Valente’s job experience at Convene are “Oversee print, digital, and social campaign strategies,” “Internal and external branding,” “company-wide re-brand” and “a brand refresh“.

“Brand refresh” — as in rebranding Hillary Clinton as a warm and fuzzy grandma whom you’ll run into while shopping at the local supermarket or, even more incredibly given her requiring assistance to go up just one step, hiking in the woods.

When you run into grandma Hillary, just make sure you ignore the men in black — those Secret Service agents who accompany the Clintons like glue wherever they go.