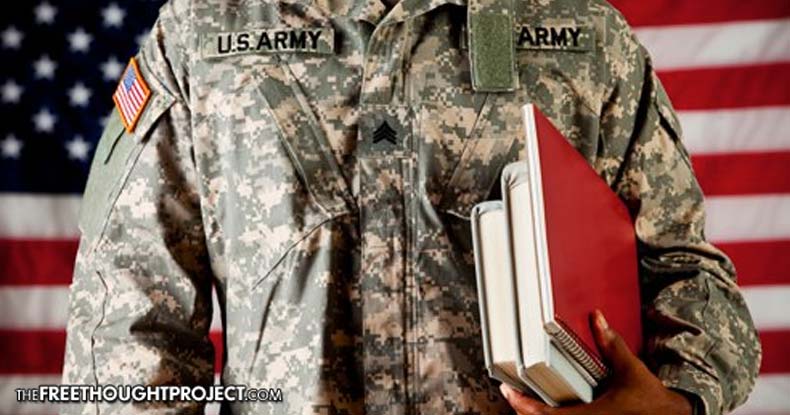 In October, the Pentagon recalled millions in reenlistment bonuses it paid to Gulf War veterans. The decades-old bonuses were paid to U.S. soldiers who would reenlist for the Iraq and Afghanistan war efforts. Understandably, many veterans felt betrayed upon learning they’d have to repay what they’d considered money owed to them for signing up to fight again. One of the reasons many potential servicemen join the armed forces, in the first place, is the promise of future educational benefits. Now, it seems, the government is at it again, and it appears many reservists are finding out the hard way that what they’ve been promised, they may never receive.

According to Task and Purpose, an “obscure deployment code, a measure the Pentagon created in 2014 to scale back spending on benefits,” deployed reservists have been prevented from earning credit towards their GI Bill educational benefits. In other words, the soldiers’ deployments won’t get them any educational benefits when they get home. “By law, reservists involuntarily mobilized under Title 10, section 12304b, do not receive credit for the GI Bill while they are activated,” Task and Purpose reported.

Marine Sgt. William Hubbard, currently deployed overseas in Honduras, isn’t just any reservist. He’s also a soldiers’ advocate and serves in his civilian role as the Vice President of Government Affairs at Student Veterans of America, a national veterans advocacy group focusing on education policy. Hubbard said, fellow Marines in Honduras are stunned as the word has slowly spread through the ranks. Most incorrectly believed they would receive seven to nine months’ worth of credit for GI Bill benefits, including Hubbard, a benefits legislation expert, Task and Purpose writes.

Hubbard said, “Reservists serve their country like any other component, and they have to balance civilian employment, education and the military…And to say they don’t rate the full benefit? It doesn’t add up.”

Under Title 10, section 12304b, at least 1,780 reservists have been deployed and will not receive GI Bill benefits for their service time overseas. A Marine reservist from Cleveland, Ohio, Sgt. Mark Wong, said he was frustrated after learning his service to his country did not deliver full benefits. He said, “Once I heard about the exemption, it blew my mind. We work the same hours as active duty people doing the same job. The government is saying our sacrifice isn’t worth as much as it is for those on active duty. But we leave behind families and our civilian careers too.”

Wong needed those benefits in his civilian role in criminal justice, explaining he’d planned on getting an advanced law degree to further his career and earn bonuses.

Hubbard, too, like Wong, had planned on earning an advanced degree, desiring to get an MBA. Now he says, “At this point, I have to take a step back to assess the financial viability. This would make the difference between doing it or not…Now I have to decide between starting a family or my education, and not both.”

Apparently, the Pentagon is attempting to tighten up its defense spending. According to Task and Purpose, the Pentagon’s 2017 budget called for doubling reserve mobilizations, in part to ease the strain of operations across the globe, from the fight against the Islamic State group to ramped-up deployments in Europe in the face of growing Russian aggression.

Some members of Congress are aware of the problem and have introduced bills to re-institute the stripped benefits. According to Task and Purpose, Sen. John Cornyn, R-Texas, and Sen. Al Franken, D-Minn., proposed the National Guard 12304b Benefits Parity Act in May. The bill would grant GI Bill benefits to reservists along with health care and retirement benefits, according to Michael Dale-Stein, a spokesman for Franken. But it has not moved from the Senate’s Armed Services Committee since its introduction.

Franken reportedly issued the following statement to Stars and Stripes, “The men and women who serve our country lay everything on the line to protect us, and in return, they deserve access to the support and benefits that they’ve rightfully earned…But unfortunately, too many members of the National Guard in both Minnesota and across the country who served on active duty came home and couldn’t get important health care and education support.”

We at the Free Thought Project find the Pentagon’s demand of veterans repaying signing bonuses and deployment codes which deny GI Bill educational benefits to deployed reservists, quite incredulous. It’s even more astounding when one considers the recent revelation the Pentagon itself cannot account for 6.5 trillion dollars in missing taxpayer funds for which it was entrusted.

It’s one thing to misplace a few thousand, or even a few hundred thousand dollars, but when 6.5 trillion goes missing, and you ask your veterans to repay their signing bonuses, you’ve just stooped to a new low, and transformed yourself into a five-sided bucket of scum, no longer worthy of the respect your organization once enjoyed.

The Pentagon’s financial accountability problems go way back, even to just before 9/11/01, when then Defense Secretary Donald Rumsfeld said 2.3 million Pentagon funds went missing. More recently, lawmakers on Capitol Hill have decided to apply proverbial screws to the Pentagon.

Lawmakers on Capitol Hill have introduced legislation to impose penalties on the Pentagon if it fails to meet the legally mandated goal of being ready for a full audit by September 30, 2017, CNN reported.

But here’s a stupid question. Why would it take almost a year for the Pentagon to find out where the money is? Could it be that the missing monies are funding the “moderate rebel” proxy war against Syria’s Bashar al Assad? At any rate, it appears the Pentagon is all too willing to balance its trillion dollar budget shortfalls on the backs of American servicemen, many of whom are not from the same wealthy backgrounds as some of the nation’s congressional members.

Breitbart and 60 Minutes helped expose how lavishly congressmen and congresswomen can live, simply by using certain loopholes regarding how they choose to spend their reelection and PAC campaign funds.

A 60 Minutes investigative report by veteran CBS reporter Steve Kroft and Government Accountability Institute (GAI) President and Breitbart News Senior Editor-at-Large Peter Schweizer revealed how leadership PAC loopholes allow members of Congress to convert campaign cash into lavish lifestyle upgrades for themselves and their family members. “It’s another example, unfortunately, where the rules that apply to the rest of us, don’t really apply to the members of Congress,” said Schweizer on 60 Minutes. The report, which contained selected material from Schweizer’s forthcoming book Extortion: How Politicians Extract Your Money, Buy Votes, and Line Their Own Pockets, revealed embarrassing and outlandish instances of cronyism and self-enrichment by members of Congress. Despite the fact that funds from leadership PACs are supposed to go to help elect fellow members of one’s own political party, lax campaign laws allow lawmakers to turn their leadership PACs into private slush funds to fund just about anything.

Taken as a whole, the request for veterans to repay enlistment bonuses, the refusal to pay GI Bill benefits for deployed reservists, the decades-old mismanagement of Pentagon funds, and the lavish spending by lawmakers, may lead some to believe the warmongers will not answer to anyone and will extort money from those who most likely cannot afford to pay.

All the while, the very same lawmakers who’ve been sent to Washington to hold accountable government entities (like the Pentagon), are living it up by lavishly spending slush funds meant to help get them reelected. What a jacked up, indulgent, oppressive regime this nation’s government has become! Let’s change it up a bit and demand that when funds go missing in the State Department or in the Pentagon, then all the members of Congress, the Supreme Court justices, the president and his cabinet won’t get their paychecks. Only then will 6.5 trillion dollars not simply vanish from government coffers. That makes more sense than balancing the government’s budget on the backs of soldiers and denying them benefits to which they’ve traditionally been entitled.