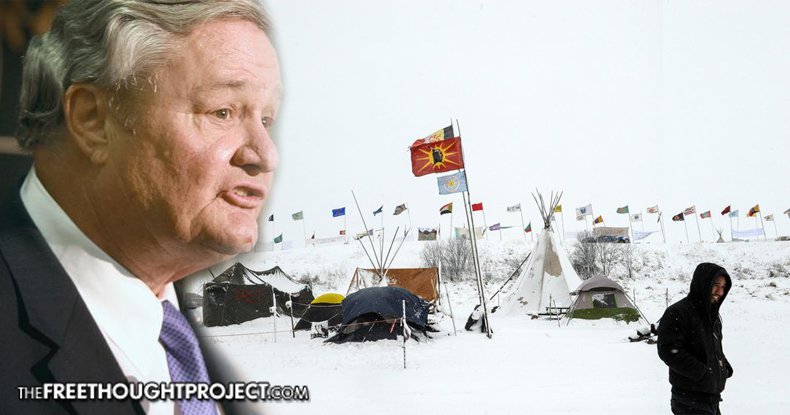 Although the evacuation appears not be one of force, it is obligatory — all water protectors camping in Army Corps-managed land have been ordered by Dalrymple to take all possessions and vacate the area.

“Any action or inaction taken by any party which encourages persons to enter, reenter, or remain in the evacuation area will be subject to penalties as defined in law.

“I direct state agencies, emergency service officials, and nongovernmental organizations to reduce threats to public safety by not guaranteeing the provision of emergency and other governmental and nongovernmental services in the evacuation area, unless otherwise approved on a case by case basis by the Morton County Sheriff or Superintendent of the Highway Patrol. The general public is hereby notified that emergency services probably will not be available under current winter conditions.”

While Dalrymple makes fairly apparent this will not be a forceful evacuation, the order parallels notice given Friday the Army Corps plans to close the same lands to the public as of December 5 — meaning all who choose to disobey would be subject to citations or appropriate legal action.

Controversy buzzed through social and other media upon the issuance of a letter to Standing Rock Sioux Tribe Chairman Dave Archambault II and Cheyenne River Sioux Tribe Chair Harold Frazier that water protectors camped north of the Cannonball River would be evicted as of December 5.

However, because that letter — sent Friday by Army Corps Omaha District Commander Col. John Henderson — did not provide any details concerning the logistics of that eviction, water protectors worried about the potential use of force.

Those concerns were putatively alleviated when Henderson vaguely clarified the notice of eviction with a press statement claiming the Army Corps “has no plans for forcible removal” of water protectors in the Oceti Sakowin and other camps in the specified area.

“Those who remain will be considered unauthorized and may be subject to citation under federal, state, or local laws. This will reduce the risk of harm to people in the encampments caused by the harsh North Dakota winter conditions,” it stated.

Gov. Dalrymple’s order appears to reiterate the same concerns, because, as the order states:

“[L]arge populations have chosen to stay in areas of Morton County managed by the United States Army Corps of Engineers south of the Cantapeta Creek and the Cannonball River (The areas include the confluence with Cantapeta Creek east, east of North Dakota Highway 1806, north of the Cannonball River, and west of the Missouri River) in tents, vehicles, temporary and semi-permanent structures which have not been inspected and approved by Morton County as proper dwellings suitable for winter habitation,” and,

“the aforementioned areas of Morton County are not zoned for dwellings suitable for living in winter conditions, and also do not possess proper permanent sanitation infrastructure to sustain a living environment consistent with proper public health.”

Dalrymple explained emergency services would not be available to anyone remaining in the camps — as the Army Corps also did in its letter Friday — despite worsening conditions of a winter storm predicted to dump anywhere from eight to 15 inches of snow. Sources inside the camps, however, claim emergency services have been unresponsive to calls for some time — or have been hindered by a police and National Guard roadblock in place at Highway 1806’s Backwater Bridge since October 27.

From the time of issuance of the emergency evacuation order, “Any person who chooses to enter, reenter, or stay in the evacuation does so at their own risk, and assumes any and all corresponding liabilities for their unlawful presence and occupation of the evacuation area.”

There are several open questions regarding jurisdiction in this complicated matter of a state governor issuing an order for lands managed by the Army Corps of Engineers — additionally on the same lands Indigenous peoples consider unceded pursuant to treaties signed in 1851 and 1868.

Attorneys with appropriate knowledge of this matter were thus far unable to provide information for this report, although sources inside the camp say tribal lawyers are consulting on the matter.