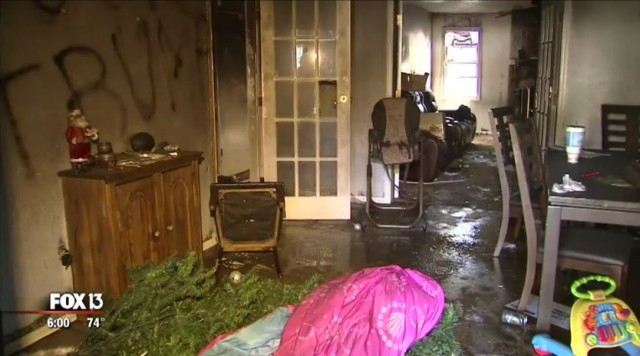 A Navy veteran with two young children had his home vandalized with anti-Trump graffiti and racial slurs both inside and out before it was set on fire in yet another shocking example of the anti-Trump hate crime wave sweeping America.

Matthew Smith, who flies three flags in front of his house in Plant City, Florida, the American flag, the POW Flag, and the Navy flag, says he was targeted for his political beliefs.

“It’s not what I expected out of America,” Smith told Fox 13. “It should be us figuring problems out together.”

The word “cracker” was also spray painted on the house, suggesting that the crime was racially motivated and most likely carried out by ‘Black Lives Matter’ supporters.

Earlier this month, two mobile homes located nearby were spray painted with the words “f**k Trump,” “BLM” and “burn everything!,” indicating a possible connection between the two attacks.

Matthew and his family only escaped possible injury or death from the fire because they were house sitting for a relative on the night their own home was torched. The home was “gutted,” with the family’s Christmas tree and other personal items being completely destroyed by the fire.

The Smith’s home is already in foreclosure and they have no insurance to cover the belongings that were destroyed in the fire.

“If this had happened to a Hillary backer, you would never hear the end of it. Don’t count on the “progressive” media spending much time on this one, though,” comments Ethan Ralph.

Over the last few weeks, there have been innumerable hate crime attacks against Trump supporters, all of which have received barely any mainstream media attention.

Meanwhile, so-called hate crimes blamed on Trump supporters, the majority of which turned out to be completely fake, have received ample news coverage.

This attack once again highlights the fact that leftists, while preaching “tolerance” and “diversity,” are the most intolerant people you could ever meet, and cannot stand diversity of opinion, lashing out against it with abuse and violence on a regular basis.