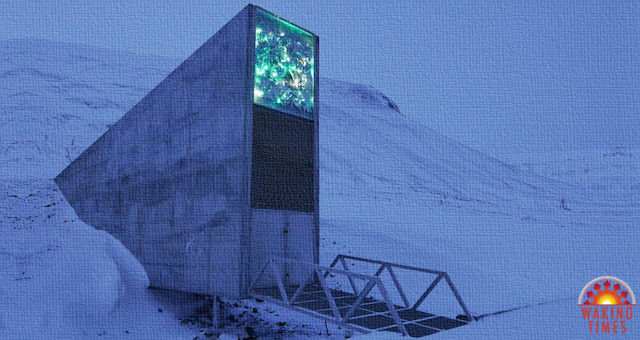 The Svalbard seed bank, set like a concrete monolith in the minus 4 degree Celsius permafrost of a mountain on a remote island in the Svalbard archipelago between mainland Norway and the North Pole, shouldn’t determine the fate of our agricultural future. Though the remote bank has collected 860,000 seed samples from around the world, with the latest withdrawal being made from war-torn Syria, what are the true intentions behind a bank said to, “preserve as much of the world’s crop diversity as possible,” while seed supplies around the world are being monopolized by a few corporations, and indigenous, thousand-year old seeds are being wiped out by genetically modified versions?

Svalbard’s investors, including the Bill and Melinda Gates Foundation, the Rockefeller Foundation, Monsanto, Syngenta, and other biotech interests tout this ‘seed saving’ monolith while simultaneously ravaging seed diversity, along with state laws throughout the US, and elsewhere on the globe, that prevent small farmers and gardeners from saving and sharing seed.

Currently, there are at least 100,000 global plant varieties endangered in the world. Extreme weather events, over-exploitation of ecosystems, habitat loss, and the cross-pollination of seed by genetically altered, terminator seed, contribute to the problem.

You could look at seed saving and seed sharing like open-source education. If you really want to democratize the flow of knowledge and information, you make it free, and offer it online, as many Universities now do. No one institution holds the entire knowledge on mathematics, art, literature, spirituality, or any other subject. Just as in nature, we require diversity of thought so that we don’t become automotons repeating a single, well-crafted agenda created by a handful of people.

Many farmers groups, non-profits, and governments are attempting to conserve seed diversity in their own communities, with more than 1,000 known seed banks, collaboratives, and exchanges around the world, but this time-honored tradition of seed saving is butting up against some very serious obstacles, which I’ll name in a moment.

Moreover, while the Svalbard seed bank seems to pass an initial sniff test, a little deeper digging can reveal other questions that many should be asking about such an expensive adventure in ‘protecting agriculture.’

“SSE’s seed bank and the Seed Vault are similar in many ways. Both primarily func­tion as an insurance policy for other forms of conservation. In the case of SSE, that would be varieties grown yearly by gardeners. With the Seed Vault, its seed samples held by seed banks, such as the Dutch, Philippine, or Kenyan national facilities, or SSE. The Seed Vault, however, was physically built to last as long as anything on earth. Its location is obviously remote, which adds to its security. Svalbard is under Norwegian sovereignty, which reassures many, and it was no small matter that Norway offered to pay the entire cost of construction.”

Fowler also argues that the age-old habit of seed sharing by farmers and gardeners poses too great a risk for Svalbard not to to exist, but while he dismisses ‘conspiracy theories’ around Svalbard’s true purpose, he has yet to address that those theories are not the rhetoric of ‘rabid dogs’ as he suggests. Many US states have made it illegal for gardeners and seed libraries to share seeds without a permit.

The Criminalization of Seed Sharing

Even more alarming is the European Union’s recent move to ban all heirloom seed and criminalize the planting of seeds not registered with the government. The European Commission,

“. . .regulates the marketing of plant reproductive material of agricultural, vegetable, forest, fruit and ornamental species and vines, ensuring that EU criteria for health and quality are met. EU legislation applies to genera and species important for the internal market and is based on:

Registration of varieties or material;

Certification or inspection of lots of seed and plant propagating material before marketing.”

Many are concerned that the EU Commission will not enhance agriculture with the Plant Reproductive Material Law, but give more control to the handful of agriculture corporations which are already monopolizing the world’s seed. The draft text of the law reads such that the act of passing seed from one generation to the next would be a criminal act.

Another example of the laws which prohibit the free and unencumbered sharing of seed includes the state of Minnesota’s seed law. It is broad enough that it essentially prohibits gardeners from sharing or giving away seeds unless they buy an annual permit, have the germination of each seed lot tested, and attach a detailed label to each seed packet. This would obviously be a time-sucking, financially draining practice for most gardeners and small farmers, yet the Minnesota Department of Agriculture recently told seed libraries that they can’t distribute free seeds to gardeners unless they buy a permit and provide detailed labeling, even though the libraries aren’t selling the seeds, and only sharing them freely. The penalty for violating this law is a fine of up to $7,500 per day.

This is an example of just one law in a single state, but laws like these can be found in around 30 percent of states in the US.

Who Owns the World’s Seed?

This is even more alarming considering that just ten corporations now control 70-90 percent of all the seeds cultivated on this planet. These are:

As Mother Earth News suggests, rather than imposing laws that uproot the age-old practice of seed sharing, governments, should be nurturing the free exchange of locally adapted seeds. But then, this would put the power back in the hands of people, small groups, and widely varied indigenous agricultural knowledge, not a few power-hungry, seed monopolizing entities known for destroying the very lands they claim to want to protect, and fomenting wars within the ISIS-cabal matrix.

Additional comments by seed saver Cary Fowler hint at the small farm disadvantage that these seed monopolies have created:

“Keep in mind that many of the sam­ples held in Svalbard are of variet­ies no longer grown by farmers. In situ, or on-farm, conservation is not a realistic conservation option for these. Moreover, as we know, that form of conser­vation has its own set of risks. So, it is vitally important that all our different conservation efforts, whether in the garden or in the seed bank, be supplemented by a facility such as the Seed Vault.

The cost of conserving crop diversity is remarkably low relative to the massive benefits it brings. After all, we’re talking about the foundation of our food.”  (Source)

Imagine for a moment what would happen to the global seed supply if Syria were the rule, instead of the exception. As National Geographic attests.

“Thanks to Syria’s civil war, the region’s primary seed vault in Aleppo has been forced to operate in a limited fashion, amid fighting that has left several hundred thousand dead and forced an estimated 11 million to become refugees. As ISIS controls part of Syria and refugees stream across Europe, destruction of antiquities and infrastructure continues.”

As smaller seed sharing communities are wiped out by organized war, weaponized weather, electromagnetic abnormalities caused by geoengineering and other programs, and false flag events of every kind, more people would be forced to turn to the current seed monopolizing governments and corporations holding out in their permafrost fortress in Svlabard. If you want to live – and eat – after WWIII, you’d have no choice but to be under the total control of these few entities.

The Plausible Deniability of Genetic Diversity

Carey Fowler swears that Svalbard was built to promote genetic diversity, not uniformity, but that claim hardly stands up to scrutiny when you look at what its investors have already done to damage natural genetic diversity in the world’s crops.

For example, La Via Campesina, a farmers’ movement of 150 organizations from 70 countries, has grave concerns about protecting biodiversity. In its statement to those gathered in Bali for the United Nations treaty on plant genetics, the organization urged treaty drafters to reevaluate the legal framework that allows seed patenting and the spread of genetically engineered crops, like those that Monsanto, Syngenta, and Dow cultivate. All three of these companies were investors either directly or indirectly in Svalbard.

Additionally, most of the crops that were ‘developed’ in the last 40 years were to facilitate a mechanical harvest and easy shipping, meaning varieties of tomatoes and other fruits have been developed that were harder and tougher — often at the expense of other qualities, such as taste. This same process has occurred with numerous crops. The biotech industry isn’t protecting seed diversity, they are enhancing the mechanized, post-industrial vision of cheap, tasteless, nutritionless food, but Svalbard could point to something even more sinister than this. It is called the ‘doomsday seed vault’ for a reason.

Carey Fowler suggests that the Svalbard Seed Bank has ‘put an end to the extinction of crop diversity,’ when asked if the seed vault is thus far a success, but also admits there will always be seed diversity that is not contained within the bank.

To give a specific incidence of Svalbard’s financiers handy-work,

“Corn has been carefully tended in Mexico for eight millennia and environmental conservationists report that thousands of peasant varieties are still grown throughout the country. With an estimated 75 per cent of the planet’s biodiversity vanished as of 1995, Mexico’s heterogeneous corn fields are a rare vestige of the age prior to the “Green Revolution” era that is responsible for the artificially and unhealthily homogenous industrial agriculture that is prevalent now.”

This is just one type of crop in one country. Monsanto almost single-handedly wiped out eight thousand years of genetic diversity developed by Mother Nature with a handful of their genetically modified corn varieties.

Additional supporters of Svalbard, Bill Gates and the Rockefellers are known population control artists who have altered our environment in a number of drastic ways to “maintain humanity under 500,000,000 in perpetual balance with nature,” as stated plainly on the Georgia Guidestones. Svalbard is the grisly fall-out plan B, for a multi-point roll out of death technology meant to cull the masses. It isn’t meant to save us, or our seed. We are nothing more than guinea pigs for their biological/medical experiments.

This is a form of genocide, meant to protect only the elite few who believe they have a special duty to develop a transhumanist society. What better way to control the handful of humans left on the planet after complete annihilation than to utterly control their food?

Welcome to the New World Order. Svalbard is only one ‘doomsday’ vault in a multi-faceted plan to create doom overall. Protect your seed. Don’t give governments or corporations (who control our governments) the right to take your seed sovereignty. This is your right to life.

This article (Svalbard – How the Elite Plan to Survive an Engineered Extinction Event) was originally created and published by Waking Times and is published here under a Creative Commons license with attribution to Nathaniel Mauka. It may be re-posted freely with proper attribution and author bio.