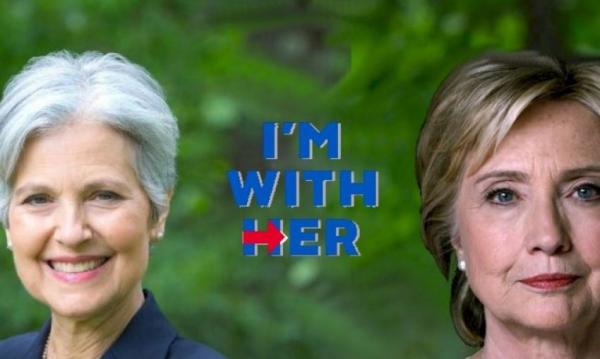 Well, this is devolving into a ridiculous cluster%&$*.

In a first-ever attempt to demand recounts in multiple states following a presidential election, Dr. Jill Stein has raised more than twice what she raised as a presidential candidate of the green party — over $7 million — to pay for temporary workers, legal fees, and filing costs to demand vote recounts in the key states of Wisconsin, Pennsylvania, and Michigan.

Theoretically, if all three of these states were “flipped” in the recount process, the presidency would go to Hillary Clinton.

Well, now the Wisconsin Elections Commission has denied Stein’s request to have the votes specifically recounted by hand, so she’s announced that she’s suing the whole state.

Just in Wisconsin alone, the cost of hiring the thousands of temp workers that completion of a hand recount would require will be somewhere in the ballpark of $3.5 million to get it all done by the federal deadline of December 12. If she loses the lawsuit, Wisconsin can recount the votes however it chooses (which will, quite obviously, not be by hand).

Pennsylvania said Stein already missed the deadline of November 21, so she’s suing that state too.

According to the Washington Examiner, “And even if Stein manages a recount in Pennsylvania, nothing’s guaranteed. Of the thousands of statewide races in the last 15 years, only 27 have been decided by recounts and only three challengers have pulled off an upset.”

The whole thing seems like a gigantic waste of time and resources that won’t end up changing the outcome, which is in essence what Donald Trump said about it (more specifically, he called it a “scam” and “ridiculous” and mentioned once again that Hillary already conceded).

Trump has also pointed out that millions of illegal votes were also cast, speculation that isn’t really all that wild if you consider our own president was urging illegal immigrants to vote in televised interviews.

Trump does at least have a point in the fact that Stein has focused her recount efforts specifically on states which will reverse the outcome of the election and throw the whole thing Hillary’s way. She’s not asking for a recount in, say, New Hampshire where Hillary only won by a measly margin of 2,732 votes.

So @HillaryClinton only won New Hampshire by a mere 2,732 votes… why isn't @DrJillStein raising millions for a recount there? #ShesWithHer

That state could much more easily be flipped than any of the three states Stein is forcibly having recounted.

It’s that last point that makes the entire thing seem utterly ludicrous. Just think of all the things $7 million could buy… and Jill Stein is basically flushing it down the toilet on a last-ditch scam to force Hillary into the White House.

The real question out of all this is why… Why Jill? Why? What exactly is her motivation here?

Hillary’s camp has — surprise, surprise — joined in the recount efforts (which seem more staged by the minute). It’s also being alleged that none other than George Soros is secretly funding the recount campaign behind the scenes. If that’s true, it figures.