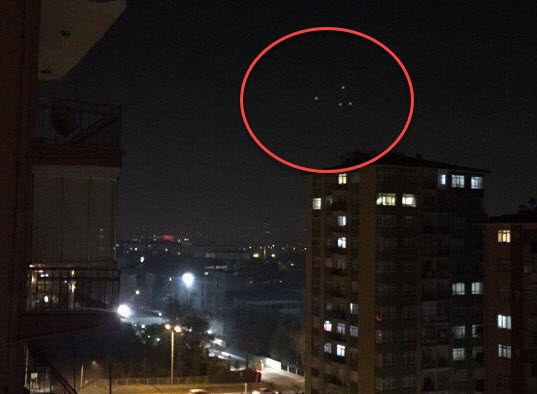 Is Turkey testing out a new kind of aircraft/weaponry or running a military exercise they don’t want people to know about?

Dozens of people reportedly witnessed UFOs in the skies above at least 12 major Turkish cities this weekend followed by reports of a loud explosion sound or sonic boom.

The sightings and the sound was caught on camera by numerous people:

Here’s the boom noise. WARNING: this is extremely loud, so you might want to turn your speakers down a little before hitting play, otherwise your eardrums will hate you.

But as soon as the hashtag #UFOAttacktoTurkey started trending first at #1 in Turkey and then #8 globally, Twitter apparently started censoring it, taking down Tweets with videos and pictures.

First removing #ufoattacktoturkey from the trending section, now Youtube videos are disappearing by the second..smh…It's time to wake up!!

Some people reported that their videos with the hashtag were pulled from YouTube as well.

It was speculated that the sightings corresponded to a military exercise.

Strangely, a similar looking set of lights was spotted in the skies above Jonesboro, Texas near the Ft. Hood military base.

Whatever is really going on here, we aren’t being told about it.

No matter what, if it was really just some hoax or fake, why would Twitter go to such massive lengths to block uploads, remove posts, and shut down a trending hashtag?