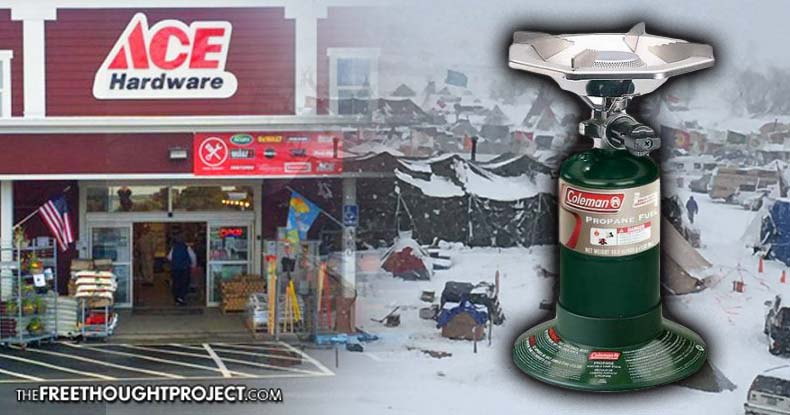 As part of the Morton County Sheriff’s Department’s effort to quash the movement camped in opposition to construction of the Dakota Access Pipeline, national chain ACE hardware stores have been instructed by law enforcement not to sell any incendiary devices — that includes propane tanks Standing Rock Sioux water protectors partially rely on for heat in the bitter winter conditions.

In other words, law enforcement has effectively quashed the sale of potentially life-saving supplies to those encamped at Standing Rock as bitter winter conditions grip the Oceti Sakowin and other camps.

“Just wanted to check on a policy that I’d heard about, to make sure [of] the truth of this policy,” he asks the ACE Hardware contact, Camillia, as he recorded the phone conversation. “I’ve been informed that in the area around the pipeline in North Dakota, ACE Hardware were no longer able to sell anything considered incendiary, including propane.

“Can you confirm that as being true?”

“That is true, ACE Hardware stores in the vicinity of the recent pipeline protests have been requested by law enforcement officials to refrain from selling materials that could be used as incendiary devices; so ACE’s number one priority is to protect the safety of its employees, customers, and the communities each store serves — ACE will continue to cooperate with law enforcement officials. ACE’s compliance is not a reflection of any corporate viewpoint on the actual pipeline project,” Camillia states.

Local law enforcement officials have apparently taken it upon themselves to determine precisely how North Dakota Governor Jack Dalrymple’s recent emergency, mandatory evacuation should be interpreted.

On Tuesday, the Morton County Sheriff’s Department first announced plans for a blockade on incoming supplies — including food — to the Standing Rock Sioux water protectors and their thousands of supporters camped near Cannon Ball. Although the governor’s office quickly reversed those plans, announcing there would be no such blockade, the sheriff’s department modified blocking the delivery of supplies by stating it would issue fines of $1,000 to anyone attempting to deliver needed equipment to Standing Rock.

Dalrymple’s emergency evacuation order came as a winter storm began to grip the area — but it has been unclear whether it or an eviction order for December 5, issued by the Army Corps of Engineers has standing authority.

Thwarted by the governor, ACE Hardware’s sudden reversal of policy appears to be the sheriff’s next step in attempting to clear the camps of water protectors — but their vow to stay out the bitter North Dakota winter means a company’s refusal to sell necessary heating equipment could be asking for tragedy.

Per the letter Gilbertt received from ACE Hardware:

Thank you for contacting the Ace Care Center.

Ace Hardware stores in the vicinity of recent pipeline protests in North Dakota have been requested by law enforcement officials to refrain from selling materials that could be used as incendiary devices. Ace’s number one priority is to protect the safety of its employees, customers and the communities each store serves; Ace will continue to cooperate with law enforcement officials. Ace’s compliance is not a reflection of any corporate viewpoint on the pipeline project.

If you need any further assistance, please do not hesitate to contact us and refer to incident 2529138.

Have a great day!

Helpful is our Business – Caring is our Commitment”

Although that email and phone call were only one confirmation, other callers contacted ACE Hardware’s corporate headquarters for confirmation. In the following video, beginning around the 15:20 mark, you will hear the company’s headquarters, indeed, confirm the original account of compliance with local law enforcement demands:

Some local businesses say they have not and will not turn any customers away — as heard around the 37:30 mark — despite strained relations between those encamped and the small towns in the area. Nevertheless, it is ACE Hardware’s acknowledgement of compliance from headquarters that remains a troubling point.

This effort to deny water protectors fundamentally necessary supplies — as temperatures dip well below the freezing mark — is a clear violation of human rights, a dismissal of law, and a tangible danger to human life.

Among those camped are tribal elders, the elderly, young children, pregnant women, newborn babies, and others. Arbitrarily depriving them of a needed heat source is a direct threat to life.

Morton County Sheriff Kyle Kirchmeier has claimed water protectors used propane tanks to improvise explosives during the conflict with police on November 20 — but no evidence, other than highly suspect pictures with no context, has ever been produced by his office.

This is a developing story and will be updated if and when further information is made available.