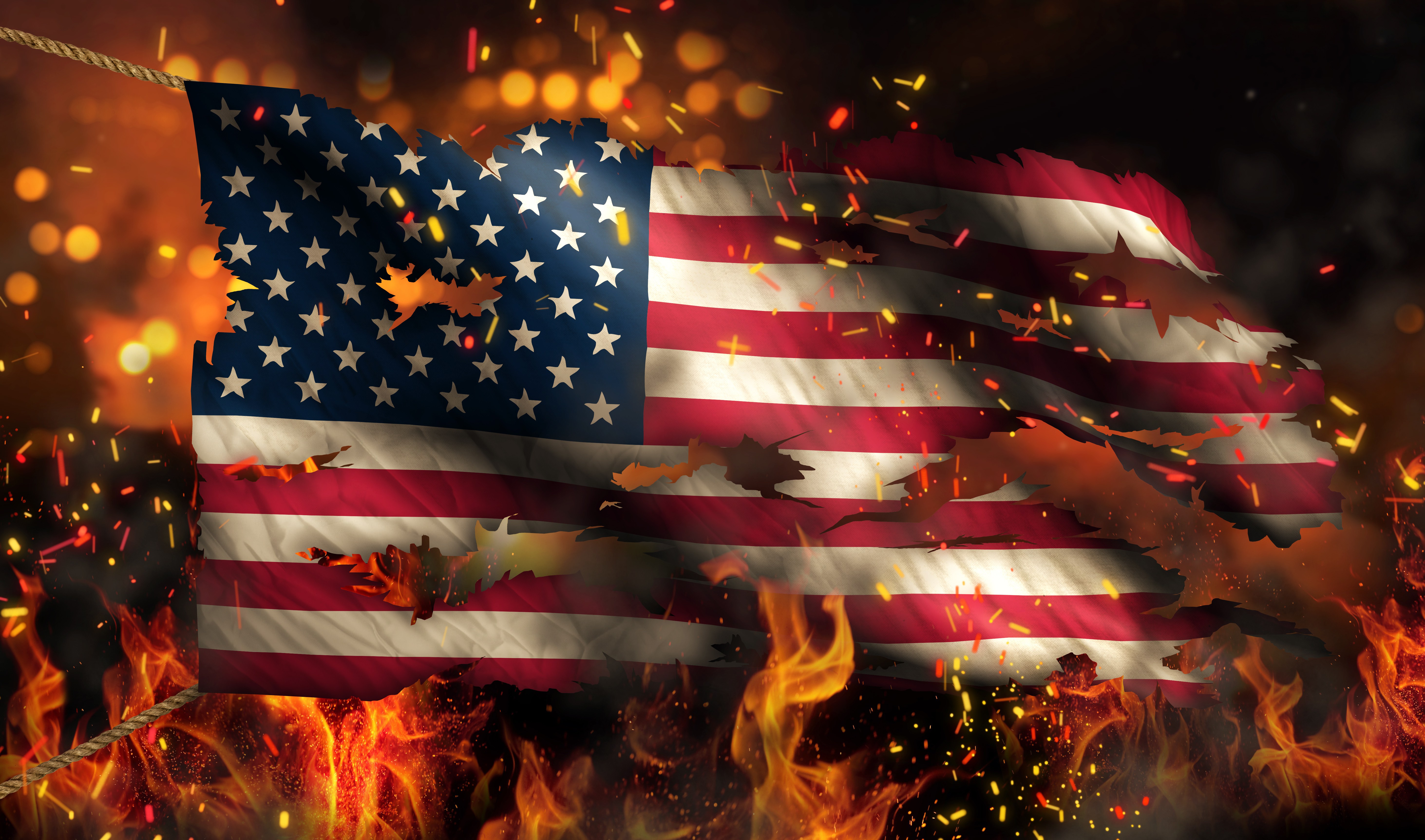 Every few years, some people get mad and burn the American flag and all heck breaks loose.

Currently, flags are being burned on a regular basis all over the country ever since Donald Trump beat Hillary Clinton in the race for the presidency, and people are responding in the usual dramatic fashion, with cries for new amendments to outlaw the act, threats of physical violence, and all sorts of hair-rending.

Our President-Elect, Donald Trump, had one of the most ridiculous (and unconstitutional) reactions. He took to Twitter to recommend that people who burn American flags be punished with jail time or a loss of citizenship.

Nobody should be allowed to burn the American flag – if they do, there must be consequences – perhaps loss of citizenship or year in jail!

Clearly, he hasn’t always been against free speech. Here’s a tweet he fired off in 2013.

“If the freedom of speech is taken away then dumb and silent we may be led, like sheep to the slaughter.” – George Washington

Incidentally, flag burning is illegal and punishable in countries like Turkey, Saudi Arabia, and China. And we know how free they are.

And before you get all partisan on me, do keep in mind that in 2005, Hillary Clinton was one of the sponsors of a bipartisan bill to make the desecration of the flag illegal.

I support the right to burn the flag.

I think that burning the flag is abhorrent and childish, but I’ll support the right to do it forever.

Because constitutionally protected free speech isn’t just for things that we want to hear. Protesting isn’t only acceptable if the opinion is popular.  We all get to speak our mind freely, to demonstrate without harming others, and to protest injustice as long as we aren’t trampling on the rights of others if we do so. The debate has been going on for decades, and the Supreme Court has upheld the lawfulness of this form of protest in both 1989 and 1990.

In a 2012 interview with CNN, the late Justice Scalia said:

“If I were king, I would not allow people to go around burning the American flag — however, we have a First Amendment which says that the right of free speech shall not be abridged — and it is addressed in particular to speech critical of the government. I mean that was the main kind of speech that tyrants would seek to suppress. Burning the flag is a form of expression — speech doesn’t just mean written words or oral words — burning a flag is a symbol that expresses an idea. ‘I hate the government, the government is unjust,’ or whatever.”

When is burning the flag wrong?

As long as the flag you’re burning is your own flag, well, I think you’re a douchebag, but blaze away. You’re within your rights.

The only time it’s legally wrong to burn a flag is when it’s someone else’s flag.  Take a page from the libertarian playbook here. Murray Rothbard, economic scholar and the Academic Vice-President of the Mises Institute, made it simple.

Keeping our eye on property rights, the entire flag question is resolved easily and instantly. Everyone has the right to buy (or weave) and therefore own a piece of cloth in the shape and design of an American flag (or in any other design) and to do with it what he will: fly it, burn it, defile it, bury it, put it in the closet, wear it, etc. Flag laws are unjustifiable violations of the rights of private property. (Constitutionally, there are many clauses from which private property rights can be derived.)

On the other hand, no one has the right to come up and burn your flag, or someone else’s. That should be illegal, not because a flag is being burned, but because the arsonist is burning your property without your permission. He is violating your property rights.

Note the way in which the focus on property rights solves all recondite issues. (source)

Flag burners also need to keep in mind that for every action we take and every word we say, there are repercussions. Free speech doesn’t mean you can say or do something without regard to the consequences. It simply means that you’re protected from being imprisoned, criminally charged, or fined. If you are in a public position, be prepared for the fallout if this is the way you choose to protest.

Let me also point out, having raised children through toddlerhood and the teenage years, I can assure you that by freaking out because someone burned a flag, you’re giving them exactly what they want: attention. If it really bothers you, grit your teeth and walk away. Nothing takes the wind out of the sails of a good throw-down tantrum like being completely ignored.

The bottom line is this, and there is no middle ground.