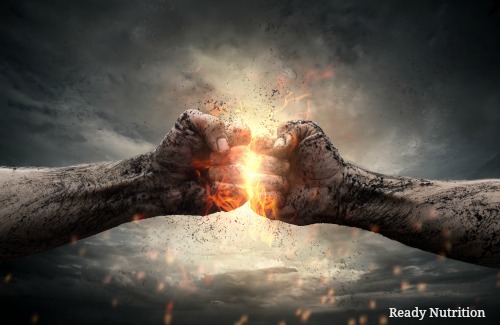 As mentioned in Part I of this series, the U.S. is (even after the election) on the cusp of a revolution.  The potential for revolution exists in all countries at any given time.  We will first list some of the factors that cause an uprising to transform into an all-encompassing revolution.

Revolutions usually are not an instantaneous occurrence, but rather have a slow buildup toward their culmination or climax.  When a population suffers for a long period of time without any hope of change in a democratic fashion and their basic needs as individuals and families are not being met, many times matters are taken into their own hands.  This is not necessarily a “right” or a “wrong” issue: it just is.  Revolution is endemic, so to speak, of the human race.

Societies and nations come into being as a result of revolutions, and usually follow a cycle: an upswing, or rise, followed by a peak where the country or culture is at its zenith, and then a slow (sometimes sudden) decline, and then collapse.  For some extra reading, the work “Collapse,” by Jared Diamond gives several examples of civilizations that have declined slowly or disappeared suddenly and swiftly that are really worth reading.

The Founding Fathers of the United States were adamant when the nation was in its infancy that the Revolutionary War was intended to be a “one-time thing, not repeated” because (they so believed) the framework of our government was intended to be one of checks and balances.  These safeguards were meant to ensure that power does not accrue only into the hands of one branch (especially the executive branch) to prevent a dictatorship.

They were not, however, able to envision a nation of 320 million people and the technological advances that enable almost a complete surveillance state to be set into place.  They also were (mostly) of English stock and forbears and did not foresee the ethnic, social, and cultural diversities and challenges that would arise with the influx of millions of immigrants in the 19th and 20th centuries.  In their wisdom, however, they placed the 2nd Amendment into the U.S. Constitution’s Bill of Rights: the purpose of this was not to enable hunting and marksmanship so much as it was to enable the people to have recourse to arms if a government ever became dictatorial or totalitarian.

A government that is in the process of being overthrown always labels the rebels as “terrorists” or “criminals” because it is a process that overthrows the existing social and political order.  A government’s primary function is to perpetuate itself while quelling or preventing dissent or overthrow: survival of the entity and not the individual is the goal.  “Bloodless” revolutions never truly occur: a life will always be lost in the process somewhere.

Revolution usually is (and should be) a last resort.  One of the greatest dangers in the overthrow of an existing government is that the revolutionaries will become the very thing they sought to overthrow: a dictatorship with no room for dissent in any way, shape, or form.  The most successful revolutions occur when the rebels muster up enough popular support that even when not supplied with men or materials, the populace (at bare minimum) stays neutral and gets out of the way of the rebels.

In the U.S. we currently have a ton of demonstrations and protests regarding the presidential election (those just jumping on the bandwagon to be a part of a cause, although liberals at heart), paid disrupters/agents provocateur (on the Soros payroll to instigate, for example), and Clinton supporters.  These are not revolutionaries, although they view themselves as such.  They are not out to “overthrow” the government but to perpetuate the state of continuous “soft-socialism” we have been living under for the past 8 years.

If a revolution occurs in the U.S. it will come as the result of clashes between the Right and the Left as the Left continues to jockey for position and attempt to discredit and reverse the election results, and the Right is just sort of standing around to see what happens. It may also come if the current administration refuses to end, either by a declaration of martial law or involvement in a new war that has catastrophic consequences that enable the executive branch to stay in power.  Only time will tell if one occurs in the U.S. as a result of these elections and any possible post-election chicanery, but make no mistake: the citizens are “keyed up” and we may just see it.  As Gary Franchi and his band so eloquently state it, “Revolution never comes with a warning,” and this is because it usually seethes on the back burner until the top blows off.