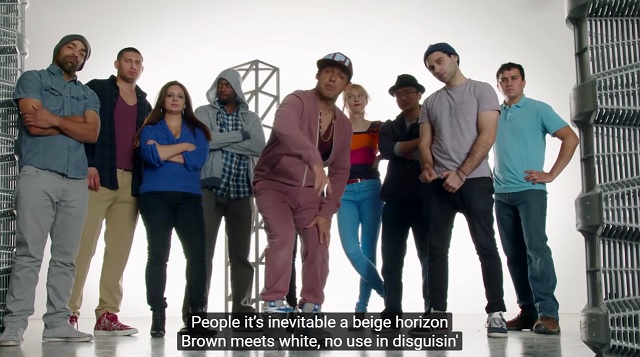 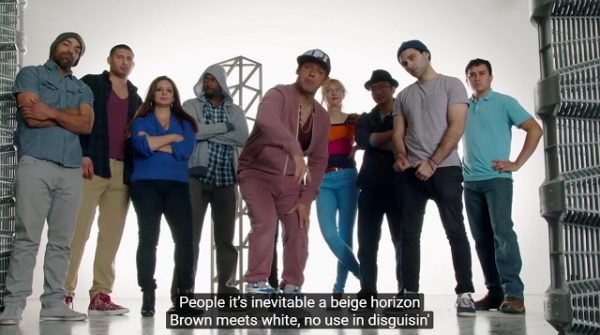 The CBC has produced a bizarre music video hailing an “inevitable” future where white people are made extinct.

The video, which was produced for the comedy show “This Hour Has 22 Minutes” and stars Canadian actor Shaun Majumder, says “a beige horizon” where we’re all “gonna look the same” is “inevitable” and mocks how “pure breeds” are “losing their grip.”

“Whoops! There it goes generational drip. Look at the ‘pure breeds’ losing their grip,” Majumder says.

Using racist terms like “Mexijews,” “Chonkies,” and “Beaner Schnitzels,” Majumder attacks Donald Trump and Steve Bannon as racists for their perceived relationship with the alt-right. “So all you mix race beauties, Rise up! Rise up!” Majumder says. “All you chonky’s in the house, Rise up! Mexijews fixin’ your house! Rise up! Beaner schnitzels guten tag – buenas dias! McWops roll up the rim – on your Fiat! Rasta Fazoul roll me a blunt.” Majumder continues: “Hope you’re listenin’ Mr. Trump and Mr. Bannon, better join the club ‘cause it’s time to climb your ass down from your gold tower, jump off the bland wagon and feel the beige power!” While Majumder and his producers seemed to believe it was funny to use racial slurs and celebrate the death of an entire race of people, the public has overwhelmingly rejected the video.

Every last comment on the video was negative. I say “was” because the CBC decided to shut down all criticism of their hate film by disabling comments altogether.

From memory, the top comment with around 300 upvotes highlighted a contradiction with the idea “race doesn’t exist” but “white people” alone need to die.

Taxpayer money is going to produce this hate-filled garbage.

Let the CBC know you don’t appreciate them using your hard-earned money to fund racist hate.