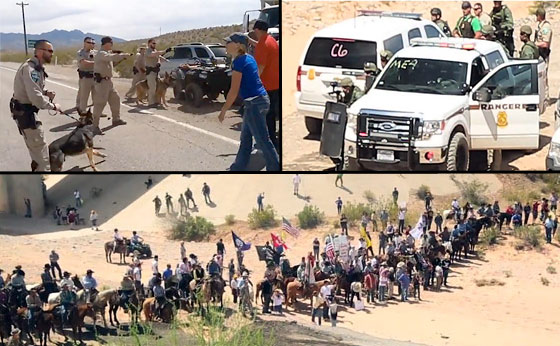 In just a couple of months, one of the biggest cases concerning the US Constitution and the rights of the citizens, journalists and militia of the united States will be decided. I’m talking about the central government’s trumped up charges via the Bureau of Land Management against the Bundy family, those who stood with them at Bundy Ranch and reporter Pete Santilli for reporting the fact and exposing what was going on.

Lord willing, in January, I’ll be meeting with Pete Santilli for an interview just prior to his trial. However, his show co-host has been living in Nevada and providing us information on how things are progressing there.

Jordan put together brief update as to what is taking place and also giving an encouraging word on the spirits of these political prisoners.

I invite you to take the time to listen to her report below and then to support The Pete Santilli Show’s mission to cover the Bundy Ranch Trial in Nevada by contributing at, http://thepetesantillishow.com/donate or direct to the Paypal account: [email protected].

Santilli had all charges dismissed against him in Oregon in September. Immediately following that, he was transferred to Nevada to face charges there.

The Bundy brothers and five others won their trial in Oregon, being acquitted of all charges, as well. They have now been transferred to Nevada also.

Each of these prisoners have been awarded an official certificate for their bravery in defending the US Constitution by Nevada Assemblywoman Michele Fiore.

Also, if you wish to help any of those who are being held prisoner without a speedy trial, you may access the list and how to help here.