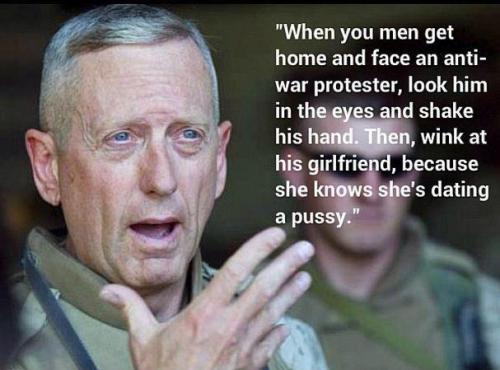 Dr. Eowyn did a blog post on Gen. Mattis back in March 2013, as Obama was purging our military. Read the post “Obama regime purges 5th senior military officer: Cmdr of CENTCOM James Mattis.” Now Trump is bringing him back!

James Mattis is a retired United States Marine Corps general who last served as the 11th commander of United States Central Command. Mattis retired from the military in 2013 so his nomination will require a waiver of the National Security Act of 1947, which requires a seven-year wait period before retired military personnel can assume the role of Secretary of Defense. Mattis would be the second Secretary of Defense to receive such a waiver, following George Marshall.

Mattis is highly decorated, an experienced veteran, and pulls no punches. Read about his extensive background at Wikpedia.

He’s known for some exceptional quotes, which no doubt will make liberals’ heads explode. Here are some of his best quotes (a few are NSFW):

The money quote to surely send liberals into head spins (and you know why):