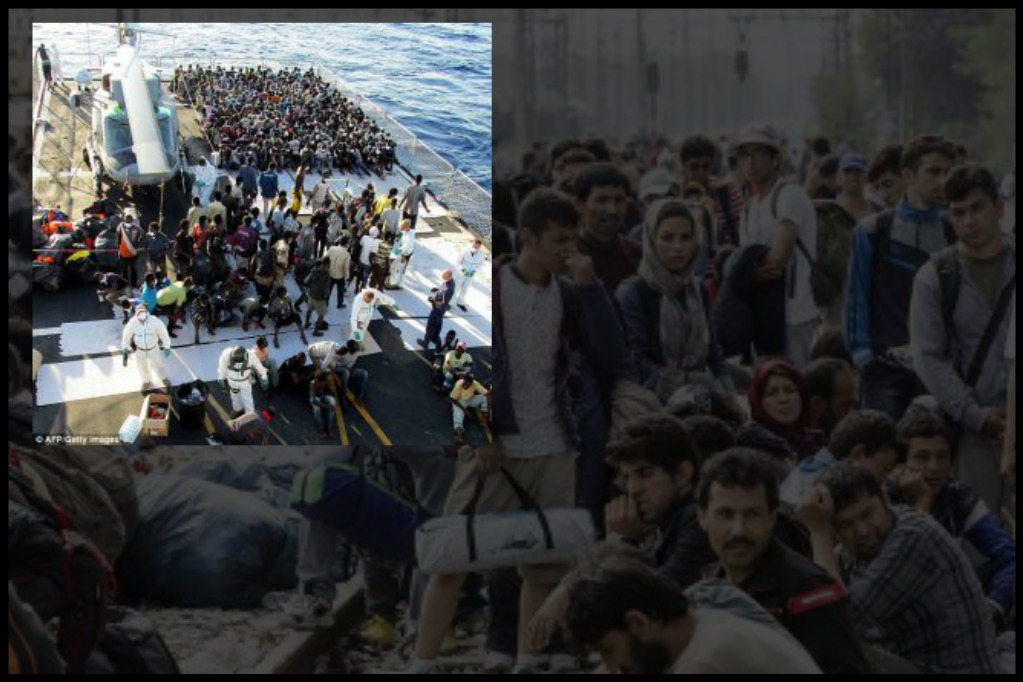 People in the West have known for years that their governments have betrayed their trust. But in a new scandal just uncovered in what is looking like one of the biggest betrayals of trust in Western history. Gefira, a company that specializes in European political analysis has outed a huge scandal- there is an active collusion between dozens of major companies, NGOs, and humanitarian organizations doing the European Union’s dirty work by providing direct transportation for the millions of Muslim invaders into Europe and they are all being funded by your tax dollars and charitable organizations.

The list of organizations is formidable. These are not just obscure entities, but major organizations such as Doctors Without Borders and Save The Children. A cadre of nations are involved including not just European nations such as Germany, Italy, and Holland, but also nations such as Belize, the Marshall Islands, and Panama, and there are even some boats who act as veritable pirates, providing no identifying information in direct violation of international laws of the sea.

These are the “children” that groups like Save The Children are helping.

This is possibly the biggest human trafficking operation in modern history taking place right before our eyes. The very governments meant to protect the people the claim to represent along with like companies also who say their goals are to look out for the good of their societies have sold their souls for money and are destroying their own nations for the almighty pursuit of an easy profit.

For two months, using marinetraffic.com, we have been monitoring the movements of ships owned by a couple of NGOs, and, using data from data.unhcr.org. We have kept track of the daily arrivals of African immigrants in Italy. It turned out we were witness of a big scam and an illegal human traffic operation.

NGOs, smugglers, the mafia in cahoots with the European Union have shipped thousands of illegals into Europe under the pretext of rescuing people, assisted by the Italian coast guard which coordinated their activities.

Human traffickers contact the Italian coast guard in advance to receive support and to pick up their dubious cargo. NGO ships are directed to the “rescue spot” even as those to be rescued are still in Libya. The 15 ships that we observed are owned or leased by NGOs have regularly been seen to leave their Italian ports, head south, stop short of reaching the Libyan coast, pick up their human cargo, and take course back 260 miles to Italy even though the port of Zarzis in Tunis is just 60 mile away from the rescue spot.

The real intention of the people behind the NGOs is not clear. Their motive can be money, we would not be surprised if it turned out to be so. They may also be politically driven; the activities of the Malta-based organisation, MOAS, by trafficking people to Italy is the best guarantee that migrants will not show up on the Maltese shore. MOAS is managed by an Maltese Marine officer well known in Malta for his maltreatment of refugees 1). It is also possible that these organisations are managed by naive “do-gooders” who do not understand that offering their services they are acting like a magnet to the people from Africa and thus they are willy-nilly causing more fatalities, not to mention that their actions are destabilizing Europe.

How high-minded the intentions of these organisations might be, their actions are criminal as most of these migrants are not eligible for being granted asylum and will end up on the streets of Rome or Paris and undermine Europe stability raising racially motivated social tensions.

Brussels has created particular legislature to protect people traffickers against prosecution. In a dedicated section of an EU resolution entitled On Search and Rescue, the text states that “private ship masters and non-governmental organisations who assist in sea rescues in the Mediterranean Sea should not risk punishment for providing such assistance.”2)

During the two months of our observation, we have monitored at least 39,000 Africans illegally smuggled into Italy, which was done with the full consent of the Italian and European authorities. (source, source)

It is difficult to comprehend the gravity of this, but what you are watching is the engineered destruction of an entire people- all of the nations of Europe- take place before your eyes. It his being ordered by the governments of Europe, facilitated by these major companies, and paid for by you through your tax dollars and charitable contributions.

Imagine how you would feel if you were giving to a charity that claimed to help people and one day you found out that all the money you were giving went to fund terrorism. Most people would feel sick at first, and then very, very angry.

This is the same but worse. These people- many of them- have spent years earning your trust and telling you to believe in their organizations, or in the case of charitable groups, to support their missions which are in themselves genuine and noble causes. Through giving aid to these “refugees,” these organizations have exposed themselves to be in the very best case a hollow shell of what they once were, having been corrupted by the lure of easy money.

It is one thing to be genuinely naieve or even outright stupid. It doesn’t excuse responsibility for one’s actions, but the degree of culpability is different because of what is in most of these cases a lack of understanding or the inability to connect cause and effect, and this can be further mitigated by the individual’s intentions. It is something completely different when a man, knowing what is right and wrong and being fully aware of the consequences that will happen and still he yet chooses to do wrong simply because he can earn personal gain at the expense of another is criminality of the worst order. It is treason.

Treason is what these companies have committed along with the criminal governments who support them. These companies are doing to their own people what Gabriel Prosser’s fellow slaves did to him.

Gabriel Prosser was an African-American slave rebel from Virginia who worked with European-American Christians to fight against slavery in the colonies. While the European Americans helped him, it was the very people he was trying to help- fellow African-Americans- who turned him into the authorities for a measley $50 reward.

So the argument that Muslims are destroying the West is only true in part, because this is the other half- Western traitors who are selling the soul of their people, privatizing their gains and when these people inevitably commit crimes, socializing their losses by ordering more “toleration” for the same barbarity that they allowed to take place.

Gefira was able to identify 15 of the boats involved. It is of note to mention that five of them are confirmed as being German owned and operated. This reinforces another point which we have been trying to emphasize repeatedly, and which I alluded to when I wrote about how a German-American woman with an hidden background and an openly professed love for Turkey is aiding a massive Muslim and African invasion of America on the US-Mexico border through her “NGO” called Tijuana Te Quiero. That is, there is a very deep and sinister plot afoot which is attempting to create immigration crises which will lead to war. As we have been reinforcing, this is the Hegelian Dialectic in practice- create a conflict then present the solution.

This conflict we see has a recurring theme- it keeps pointing back towards Germany. lndeed, we have been talking about this for a while, because if you read our response, we suspect the endgame to be completely unexpected by most and yet the end goal even more evil than in the past.

“A nation can survive its fools, and even the ambitious. But it cannot survive treason from within. An enemy at the gates is less formidable, for he is known and carries his banner openly. But the traitor moves amongst those within the gate freely, his sly whispers rustling through all the alleys, heard in the very halls of government itself. For the traitor appears not a traitor; he speaks in accents familiar to his victims, and he wears their face and their arguments, he appeals to the baseness that lies deep in the hearts of all men. He rots the soul of a nation, he works secretly and unknown in the night to undermine the pillars of the city, he infects the body politic so that it can no longer resist. A murderer is less to fear.” -Marcus Tullius Cicero