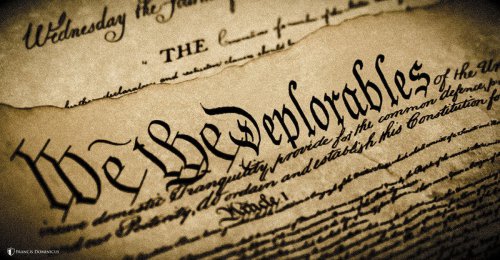 On September 10, 2016, her mask slipping, Hillary Clinton actually called millions of Americans, over whom she wants to rule as president, “a basket of deplorables” whom she characterized as “irredeemable” racists, homophobes and jingoists because they deign to support her opponent, Donald Trump.

Those whom Queen Hillary maligned immediately took “Deplorable” as a badge of honor.

Now, there is a petition on WhiteHouse.gov to name the next major U.S. Navy ship “USS The Deplorables”!

The petition was begun by D.S. “To honor those citizens who rose up to defend America and The Constitution from the globalists.”

Sign the petition here — and spread the word on social media and via email!