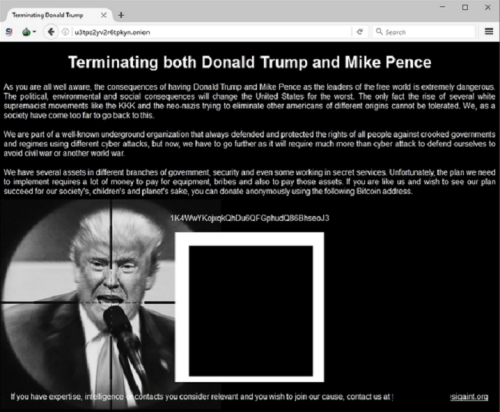 Darknet (or dark net) refers to the anonymous internet — websites that can be accessed only with specific software, network configurations, or authorization, often using non-standard communications protocols and ports.

Two typical darknet types are friend-to-friend networks (usually used for file sharing with a peer-to-peer connection) and privacy networks such as Tor, the most popular darknet, which can be accessed via a customized browser or a proxy server.

Steve Ragan reports for CSO, Dec. 2, 2016, that a recently-launched Darknet website is calling for the assassination of President-elect Donald Trump and Vice President-elect Mike Pence on the grounds that they are “dangerous” to the U.S. and the world:

“the consequences of having Donald Trump and Mike Pence as the leaders of the free world is extremely dangerous. The political, environmental and social consequences will change the United States for the worst.”

Consisting of a single HTML file, and an image of President-elect Trump in the crosshair of a scope, the website is asking for donations in order to fund the assassination attempt.

“We have several assets in different branches of government, security and even some working in secret services. Unfortunately, the plan we need to implement requires a lot of money to pay for equipment, bribes and also to pay those assets. If you are like us and wish to see our plan succeed for our society’s, children’s and planet’s sake, you can donate anonymously…”

According to Ragan, as of December 2, the assassination website had collected only $119 in Bitcoins. The US Secret Service is aware of this domain.

A person claiming to have hacked the assassination website left a message in the site’s source code, identifying and naming the Canadian developer of the website. Below is the hacker’s message, portions of which (___) had been redacted by Ragan:

This site is being hosted by the canadian citizen ____ (Last name, Firstname). He once worked for a Canadian Best Buy’s Geek Squad. However, I thought that I had saved some informations about him on my storage systems, but I can’t find them anymore. His name, citizenship and former position are from my memory, but absolutely correct.

He’s actually just a little scammer, but now he’s calling to murder the president-elect. I don’t see how anyone could sit back and watch someone doing that.

I actually planned to send an email to the United States Secret Service about him, but I can’t find an appropriate email address of the USSS, so I’ve to post this here. Please forward this message to the appropriate public authorities at your convenience.

Have a great day!

The hacker also claims to have altered the Bitcoin wallet to deny funds to the assassination site.

Here’s a screenshot of the hacker’s message (click to enlarge):

Ragan has “reached out” to the hacker via Reddit and his/her Sigaint email address.

Please pray for Trump’s safety and for the securing of his win of the 2016 presidential election.