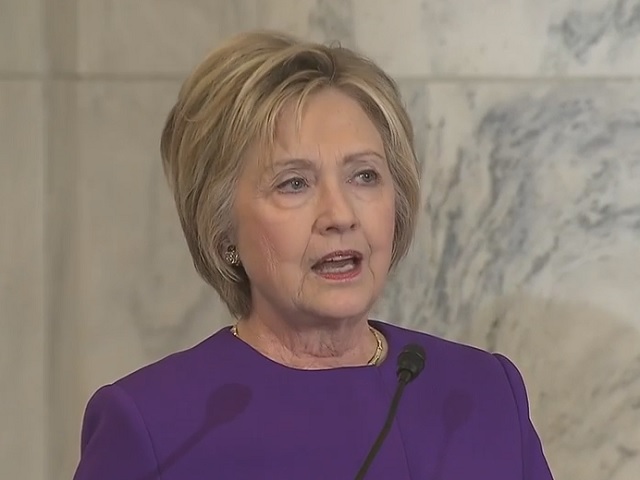 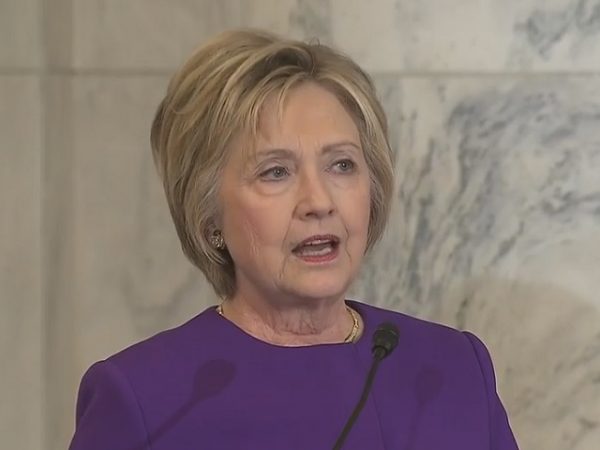 Hillary Clinton emerged from hiding Thursday to call for censorship of so-called “fake news,” saying “lives are at risk.”

While speaking on Capitol Hill at a portrait unveiling for Harry Reid, Clinton called for congress to pass legislation to “boost the government’s response to foreign propaganda” and voiced support for censorship of “fake news” on social media, insisting “it’s a danger that must be addressed and addressed quickly.”

“Let me just mention briefly one threat in particular that should concern all Americans — Democrats, Republicans, and Independents alike — especially those who serve in our Congress: the epidemic of malicious fake news and false propaganda that flooded social media over the past year,” Clinton said.

“It’s now clear that so-called fake news can have real-world consequences,” she said. “This isn’t about politics or partisanship. Lives are at risk. Lives of ordinary people just trying to go about their days to do their jobs, contribute to their communities.”

It’s not clear if she was blaming her loss on “fake news” or referencing the “PizzaGate” conspiracy theory which led a man to storm Comet Pizza in Washington D.C. last week to see if children were being abused. No doubt her statement was purposeful vague so viewers could fill in the blanks with whatever they want.

Note, she didn’t make a single comment about the Somali Muslim-refugee-terrorist stabbing spree just two weeks ago where 11 people were injured and potentially almost killed. One vigilante, who injured no one, seeking to make sure children were not being abused after reading conspiracy theories online is the real threat.

Blamed Benghazi on a fake YouTube video. Lives were at risk. https://t.co/5pqZocSUPM

Clinton continued: “It’s a danger that must be addressed and addressed quickly. Bipartisan legislation is making its way through Congress to boost the government’s response to foreign propaganda, and Silicon Valley is starting to grapple with the challenge and threat of fake news. It’s imperative that leaders in both the private sector and the public sector step up to protect our democracy, and innocent lives.”

The legislation in congress she was referencing calls for measures to counter “covert influence” being exerted by Russia “or [its] proxies.” Facebook, Google, and Twitter have all similar said they’re moving to address the “problem of fake news.”

This is an extension of her campaign’s attempt to claim all those opposing her are secret agents working for Vladimir Putin. We’re witnessing a coordinated attempt by the left to censor and shut down the new media.

Neocons still infesting congress are moving to make it happen — that Russian bill passed the house — and the biggest social media sites appear to be all on board.

If Hillary Clinton had won, the President of the United States would be fully backing this censorship plot and working tirelessly to end free speech.

Fortunately, Donald Trump won instead and can move to shut this whole scam down.