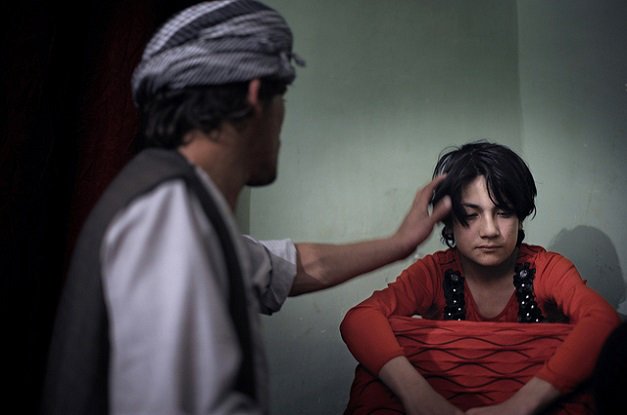 European television is finally exposing the wicked and abominable tradition that the Muslims are practicing in Bulgaria via mass sex trafficking of teenagers and the gang raping of little boys.

In a shocking report by Bulgarian television, it is made clear what the Muslim invasion in that country is doing, specifically in Harmanli, Bulgaria. Muslims are coming in and altering the culture there by taking once respected towns and turning them in a place where drugs, prostitution, robbery and rape are becoming commonplace.

Take a look at the report.

Far from what the mainstream media would have you believe about Islam and its sexual deviant teachings, the reality is a lot sicker for those who become victims. Take, for instance, the infamous bacha bazis, or dancing boys.

We have covered the story of bacha bazis before. Bacha bazis are young boys who are taken in the Muslim culture and made effeminate to dance for Muslim men. Often they are humiliated, sodomized and even murdered.

Bacha bāzī is the transliteration of a Persian phrase (بچه بازی‎‎,), which literally means “boy play.” It’s derived from two Persian words, “bacha” meaning “child,” and “bāzī” meaning “game.” The Bacha Baz, “pedophile” in Persian, is the perpetrator. A “bacha bereesh” is a boy without a beard.

Part of Bacha bāzī mostly involves using small boys for child pornography, sexual slavery, and prostitution. Thousands of prepubescent and adolescent boys are sold to wealthy and powerful Islamic men for entertainment and sexual abuse. The most desirable age for dancing boys is 13 or 14 years-old, which means in order to groom them, they must be kidnapped, rented, or bought at a younger age. Boys targeted for sex-trafficking are often found on playgrounds in the poorest neighborhoods. They are stolen, rented, or bought, then groomed, and forced into a life of slavery.

Bacha bāzī is widely practiced throughout Afghanistan, especially after powerful and well-armed warlords like the Northern Alliance commanders used force and coercion to institutionalize this abuse in the 1990’s. Despite the practice of dancing boys being illegal, and punishable by death, most Afghani officials are complicit in the abuse and don’t enforce the law.

Most claim “dancing boys” is solely an Afghani practice. But it’s not: Bacha bāzī is pervasive throughout the Islamic world. The sex-trafficked boys may be referred to in other countries by another term, such as “rent boys.”

Sadly, even our own troops have been ordered silent as to the practice, even protecting man-on-boy rape, but some have decided they could not violate their consciences and actually took a stand against the rape of some of these little boys with consequences to their own careers.

This isn’t the only thing though. The Koran teaches about sex slavery too, and we have seen that imposed by the Islamic State to the point that many of the women captured and turned into sex slaves asked to be bombed so that they might escape the conditions they are in.

Following the revelation of several women in Britain who had been held as sex slaves by a Muslim man, Pieder Beeli wrote a series of articles on the subject, which can be read here, here, and here. I highly recommend them as Beeli has an excellent grasp on the dangers of Islam

and how to defeat it.

I’m glad that the truth is coming out about what festers under the surface of the “religion of peace.” It’s not only in the texts of the founder of Islam

, but it’s in the very fabric of the culture, and it must not be allowed to enter ours. We must expose it for what it is, a work of darkness.