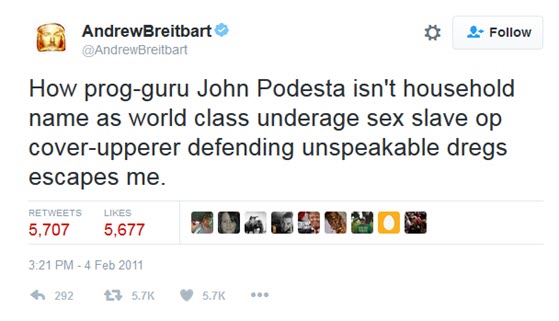 (INTELLIHUB) — Pizzagate is everywhere. From the corporate media claiming the conspiracy is “patently false” to independent researchers like David Seaman calling it real, one cannot spend much time on the internet without hearing about it one way or another.

What many may not know is that allegations against John Podesta go back close to five years and were actually made by the late Andrew Breitbart, founder of the now widely read news outlet breitbart.com.

Remember, Breitbart died under what some believe were suspicious circumstances and had made other claims about exposing a pedophile ring in the year before his untimely death.

For their part, the corporate media has gone all out in their attacks against anyone who even remotely entertained the idea that Pizzagate could be real. The sheer level of the attacks makes one wonder why they are spending so much time attacking a conspiracy that they claim is patently false. (Despite admissions that they haven’t even looked into the research)

What do you think? Was Andrew Breitbart onto a major pedophile ring in which he had gathered solid enough evidence to reveal to the world what he had found?