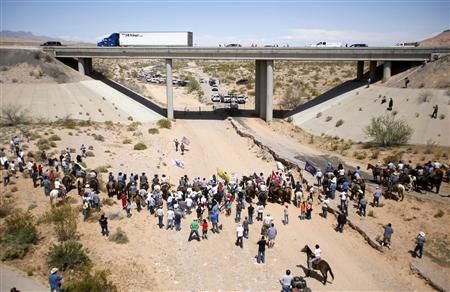 As the Bundy Ranch political prisoners prepare for their trials in early 2017, there is good news. Plenty of Bundy supporters packed the court room on Friday for the first status hearing since Ammon and Ryan Bundy arrived in Nevada following their acquittal on all charges in Oregon.

Reporter Deb Jordan with The Pete Santilli Show posted some updated information to her Facebook page regarding what took place.

“Ammon and Ryan Bundy refused to enter the court-room in shackles and chains,” wrote Jordan. “Cliven Bundy pled with the court to allow him to go last so that others who had children could get their trials over with and go home to their families.”

“Ryan Payne spoke out shouting – Resistance to tyranny is obedience to God!,” she added. “Eric Parker refused to stand before the Judge,” while “Attorneys argued the jurisdiction of the BLM.”

The judge in the case refused to hear any of the motions to dismiss the case.

Brian “Booda” Cavalier said, “It’s only fair that he should be allowed to stand trial with Cliven Bundy.”

Pete Santilli, who had all charges against him in Oregon dropped in September, joined Jordan in a video update of what is currently taking place. Take a listen.

If you would like to support Pete Santilli or any of the other political prisoners in their fight against a tyrannical BLM and a corrupt central government, click this link to see where you can send your donations.