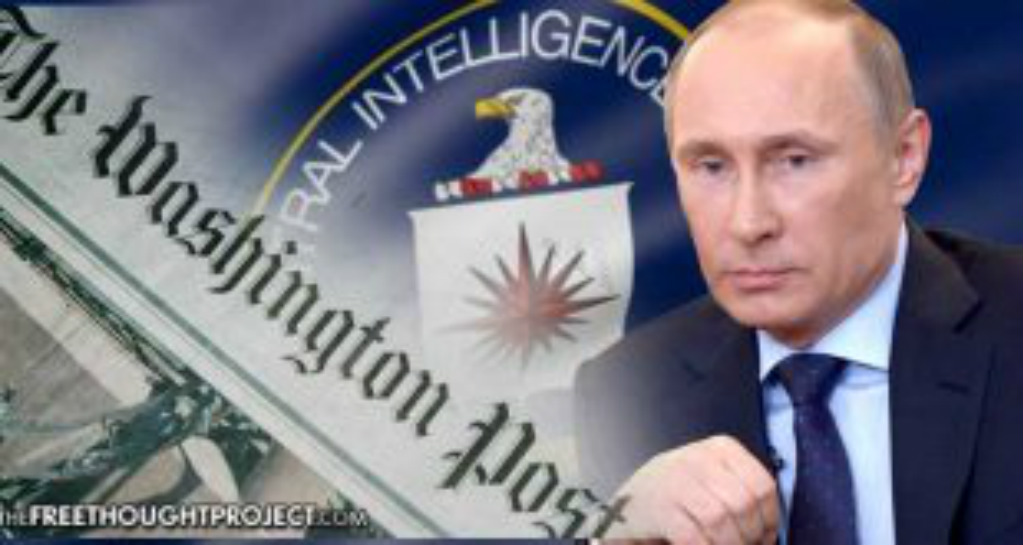 Washington, D.C. – Acting once again as the de facto public propaganda mouthpiece for U.S. intelligence/deep state interests within the U.S. government, The Washington Post reported in a scurrilous piece of yellow journalism Friday that “the CIA concluded in a secret assessment that Russia intervened in the 2016 election to help Donald Trump win the presidency, rather than just to undermine confidence in the U.S. electoral system.”

Make no mistake that this is the ‘Fake News’ the mainstream media has been warning the public about. Highly respected investigative journalist Glenn Greenwald labeled the Washington Post story, in an article for the Intercept, “classic American journalism of the worst sort,” highlighting that, “the key claims are based exclusively on the unverified assertions of anonymous officials, who in turn are disseminating their own claims about what the CIA purportedly believes, all based on evidence that remains completely secret.”

The impetus behind the move is almost certainly to constrain Trump’s anticipated rapprochement with Russia by further tainting public perception of a U.S.-Russia reconciliation by intimating that Trump in some way won the U.S. presidency with the assistance of Russia — a continuation of a common theme of the Clinton campaign.

It should be noted that Julian Assange himself said that the information released by WikiLeaks did not come from Russian sources. Many suspect that murdered DNC staffer Seth Rich was potentially behind the leaked information after WikiLeaks offered a reward of $20,000 for information leading to the arrest of Rich’s killer. WikiLeaks refused to confirm nor deny Rich as the source of the leaked emails.

Furthermore, the claims that 17 U.S. intelligence agencies confirmed that Russia was behind hacking the DNC, which was forwarded by Hillary Clinton during a presidential debate was unfounded and untrue. This claim was parroted across the mainstream media echo chamber as if it were fact. However, in reality, it was simply more anti-Russia propaganda as a means of tainting Trump.

Trump’s anticipated deescalation of tension with Russia is a red line, which essentially violates what has been a pillar of U.S. foreign policy that has been ingrained deeply in the American subconscious for the last 65+ years. The deep state bureaucracy is now attempting a last ditch effort to frame Russia in such a way in the American psyche, as to try and make it virtually impossible for Trump to work constructively with Vladimir Putin.

Sensing the attempts to paint Trump into a corner with this latest bit of ‘Fake News’ from The Washington Post, the Trump transition team released a statement calling out the forces at work behind this latest attempt to stifle the planned de-escalation of U.S. hybrid warfare against Russia.

“These are the same people that said Saddam Hussein had weapons of mass destruction,” a statement from the Trump transition team read.

This newest piece of neo-Red Scare propaganda, being pushed by the Post, comes on the heels of them just last week publishing a journalistically inept piece of likely state-produced propaganda.

As Jeffrey St. Clair and Alexander Cockburn wrote for Counter Punch in an article titled, The CIA and the Press: When the Washington Post Ran the CIA’s Propaganda Network, which discusses the connections between The Washington Post & Operation Mockingbird – a CIA program to infiltrate journalism began in the 50’s and still in operation today:

Last week, the Washington Post published a scurrilous piece by a heretofore obscure technology reporter named Craig Timberg, alleging without the faintest evidence that Russian intelligence was using more than 200 independent news sites to pump out pro-Putin and anti-Clinton propaganda during the election campaign.

Under the breathless headline, “Russian propaganda effort helped spread ‘fake news’ during election, experts say,” Timberg concocted his story based on allegations from a vaporous group called ProporNot, run by nameless individuals of unknown origin, whom Timberg (cribbing from the Bob Woodward stylesheet) agreed to quote as anonymous sources.

ProporNot’s catalogue of supposed Putin-controlled outlets reeks of the McCarthyite smears of the Red Scare era. The blacklist includes some of the most esteemed alternative news sites on the web, including Anti-war.com, Black Agenda Report, Truthdig, Naked Capitalism, Consortium News, Truthout, Lew Rockwell.com, Global Research, Unz.com, Zero Hedge and, yes, CounterPunch, among many others. I’ll have more on Timberg and ProporNot in my Friday column.

In the meantime, here is a brief historical note on how at the height of the Cold War the CIA developed it’s very own stable of writers, editors and publishers (swelling to as many as 3000 individuals) that it paid to scribble Agency propaganda under a program called Operation Mockingbird. The disinformation network was supervised by the late Philip Graham, former publisher of Timberg’s very own paper, the Washington Post.

Craig Timberg’s story, which was about as substantial as anonymous slurs scrawled on a bathroom stall, lends rise to the suspicion that the Post may still be a player in the same old game it perfected in the 1950s and continued across the decades culminating in its 1996 hatchet-job on my old friend Gary Webb and his immaculate reporting on drug-running by the CIA-backed contras in the 1980s. The Post’s disgusting assault on Webb was spearheaded, in part, by the paper’s intelligence reporter Walter Pincus, himself an old CIA hand.

Then, in what amounted to the Washington Post attempting to maintain a semblance of credibility after running a propaganda piece labeling those numerous websites, including The Free Thought Project, as “Russian propaganda,” Post editors on Wednesday attempted to distance themselves from the story by attaching to the top of the article a disclaimer that among other things claims that the Post cannot “vouch for the validity of PropOrNot’s finding regarding any individual media outlet.”

PropOrNot, the shadowy group of so-called “experts,” who refused to be identified in the Post article, has come under fire since the publication and seems to be exactly what it attempts to supposedly call out – propaganda.

The Washington Post, after putting this type of blatant state-sponsored propaganda into the U.S. mainstream news cycle, which was parroted across essentially all of U.S. media, then quietly attempted to save face by adding a disclaimer to the PropOrNot propaganda piece.

Here is the Editor’s disclaimer recently added to the top of the PropOrNot story:

Editor’s Note: The Washington Post on Nov. 24 published a story on the work of four sets of researchers who have examined what they say are Russian propaganda efforts to undermine American democracy and interests. One of them was PropOrNot, a group that insists on public anonymity, which issued a report identifying more than 200 websites that, in its view, wittingly or unwittingly published or echoed Russian propaganda. A number of those sites have objected to being included on PropOrNot’s list, and some of the sites, as well as others not on the list, have publicly challenged the group’s methodology and conclusions. The Post, which did not name any of the sites, does not itself vouch for the validity of PropOrNot’s findings regarding any individual media outlet, nor did the article purport to do so. Since publication of The Post’s story, PropOrNot has removed some sites from its list.

The thing about propaganda is that it is insidious and once it is put into the public sphere and parroted by other outlets, the job has been done as the insinuation has been planted into the public’s consciousness.

In writing about the PropOrNot hit piece by the Post, investigative journalist Glenn Greenwald and Ben Norton of the Intercept noted that the article by the Post is “rife with obviously reckless and unproven allegations.”

This latest piece by The Washington Post, about a secret CIA assessment, is simply more of the same from the standard bearer of state-sponsored propaganda.

Adrien Chen, writing for the New Yorker, noted, “the prospect of legitimate dissenting voices being labeled fake news or Russian propaganda by mysterious groups of ex-government employees, with the help of a national newspaper, is even scarier.”

And that is what this is all really about. The people pulling the strings from behind the scenes are upset that they were unable to control the narrative in the latest election, largely due to the coverage of WikiLeaks and the exposure of U.S. efforts to propagandize the American public into supporting an increased and active effort to utilize U.S. assets in the overthrow of the government of Bashar al-Assad in Syria — a Russian client state.

What you see taking place regarding the ‘Evil Russia’ narrative being perpetuated by the Post is simply the deep state trying to reassert its dominance over U.S. foreign policy for fear that Trump will destroy the sacred cash cow of the military industrial complex – public fear of Russia.

Make no mistake that there is an information war taking place, and outlets like The Washington Post, as evidenced by the publishing of the PropOrNot article and this latest CIA propaganda piece are operating not as journalistic outlets, but as propagandists for deep state interests.

Don’t let the corporate media trick you into believing their lies. Below is an example of exactly what they are currently engaging in with this latest “secret CIA assessment” — propaganda.