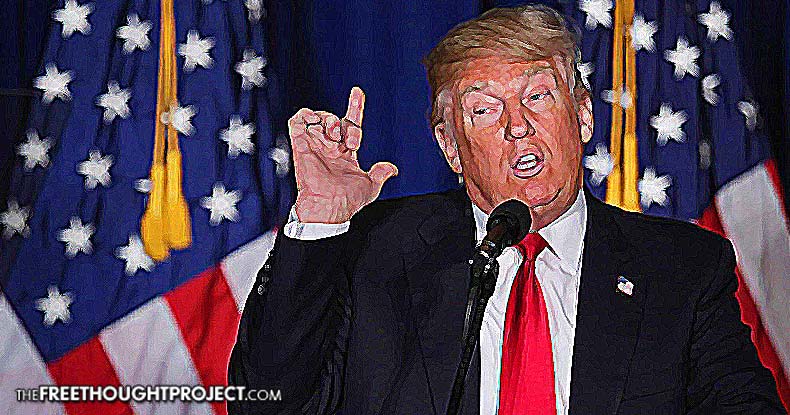 In a development with the shocking potential to upend the U.S. presidential election, ten Electoral College electors have requested further insight into President-Elect Donald Trump’s alleged ties to Russia to determine “whether Mr. Trump is fit to serve as President of the United States.”

“Allegations that Donald Trump was receiving assistance from a hostile foreign power to win the election began months before Election Day. When presented with information that the Russian government was interfering in the election through the course of the campaign, both in private briefings and public assessment, Donald Trump rejected it, refused to condemn it, and continued to accept their help. Donald Trump even made a direct plea to the Russian government to interfere further in the election in a press conference on July 27, saying, ‘Russia, if you’re listening, I hope you’re able to find the 30,000 emails that are missing.’”

Indeed, Democrats and a smattering of Republicans touting utterly unverifiable reports from unnamed CIA officials and unprovable corporate media articles published by the Washington Post and New York Times have seemingly gone out of their way to link Trump to the Putin administration — thereby discrediting the democratic outcome of the 2016 election.

But claims of Russian interference — running the gamut from responsibility of hacks of the Democratic National Committee to a coordinated, state-sponsored propaganda campaign implemented by alternative media outlets — have been thoroughly discredited, if nothing else but for a complete lack of evidence.

And that “We further require a briefing on all investigative findings, as these matters directly impact the core factors in our deliberations of whether Mr. Trump is fit to serve as President of the United States.”

It would seem truth has recently been put up for debate, judging by such articles as the Washington Post’s “Secret CIA assessment says Russia was trying to help Trump win White House,” for which the outlet quoted an unnamed and thus wholly unvettable agency official allegedly briefed on an intelligence presentation, stating,

“It is the assessment of the intelligence community that Russia’s goal here was to favor one candidate over the other, to help Trump get elected. That’s the consensus view.”

While mainstream presstitutes repeatedly harp on the vagaries of Russian meddling in the U.S. elections, a number of level-headed analysts and journalists have denounced the allegations as hysterical McCarthyite fearmongering to deflect from damaging contents of documents published by Wikileaks.

Alarmingly, the ten electors cite the unfounded so-called news articles from corporate media in their letter to Clapper:

“According to reports in the Washington Post, New York Times, and other outlets, the United States intelligence community has now concluded definitively that the Russian interference was performed to help Donald Trump get elected, yet even today Mr. Trump is refusing to accept that finding. In response to the reports, the Trump transition office instead released a statement which called into question the validity of United States intelligence findings, and declared the election over despite the Electoral College not yet casting its votes. Trump’s willingness to disregard conclusions made by the intelligence community and his continuing defense of Russia and Russian President Vladimir Putin demand close scrutiny and deliberation from the Electoral College.”

In fact, while countless corporate outlets spread the evidenceless CIA claim like steel truth, the intelligence community-at-large is not at all in full agreement on the accusations.

According to an unnamed high-level FBI official, the Bureau is not at all in agreement with the CIA on allegations Russia actively interfered with the U.S. electoral process, calling the agency’s report “fuzzy” and “ambiguous” — and saying the FBI is refusing to corroborate the apparently baseless and dangerous accusation.

This modern Red Scare — if not called out for the anti-Russian propaganda it constitutes — could not only be the final unraveling of the shreds of an American free press, but could see the overthrowing of a democratically-elected leader of the United States.

It would be more than worth noting the CIA — the same agency behind these alleged confirmations Russia has interfered with the election — has been responsible for the overthrow of myriad foreign governments. Whether or not those leaders were elected democratically had no bearing on the agency’s subversive and military tactics when U.S. foreign policy dictated the putative necessity of such a move.

To imagine such a departure from the democratic process on American soil — regardless one’s feelings about a Trump presidency — is to recognize the power of pure, evidenceless propaganda in motion.

No proof of the CIA officials’ allegations have yet been offered for public scrutiny and investigation. No evidence of Russia coordinating to thwart a Hillary Clinton presidency has yet been proffered. Nothing evincing an active Russian state hand in U.S. politics has yet surfaced — anywhere.

Astonishingly, that appears to matter little to the very electors in whom American voters entrust with the highest office in the land — and instead have placed the burden of proving the baseless reports on President-Elect Trump, himself, stating:

“Additionally, the Electors will separately require from Donald Trump conclusive evidence that he and his staff and advisors did not accept Russian interference, or otherwise collaborate during the campaign, and conclusive disavowal and repudiation of such collaboration and interference going forward.”

How Trump is supposed to provide evidence of something that didn’t take place has been lost on these ten electors, who have opted for the running ‘guilty until proven innocent’ narrative of the new McCarthyism.

What chilling effect their demands will have on the one vaguely democratic power held by the people of the United States — the election of a president of their choosing — has yet to be seen. But by every indicator, this could be the final canary call of a once free land.