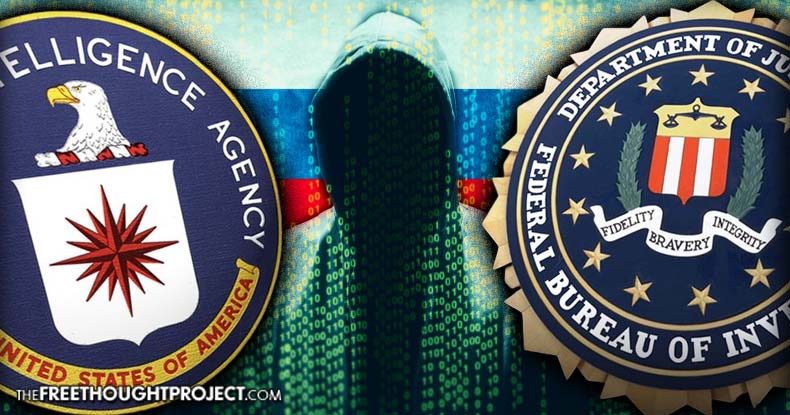 Washington, D.C. – Blatantly operating as a propaganda outlet for U.S. intelligence/deep state interests, working in collusion with Democratic party elements, The Washington Post reported that anonymous sources claimed, “the CIA concluded in a secret assessment that Russia intervened in the 2016 election to help Donald Trump win the presidency, rather than just to undermine confidence in the U.S. electoral system.”

What the Post, in their shameful piece of yellow journalism, failed to mention is that the FBI did not in any way agree with the assessment by the CIA. In fact, the FBI said the information was “fuzzy and ambiguous” and DID NOT provide clear evidence that Russia had meddled in the U.S. election.

The FBI’s unwillingness to play along in this soft-coup has infuriated Democrats. According to a report for the BizPac Review:

The FBI did not corroborate the CIA’s claim that Russia had a hand in the election of President-elect Donald Trump in a meeting with lawmakers last week.

A senior FBI counterintelligence official met with Republican and Democrat members of the House Permanent Select Committee on Intelligence in order to give the bureau’s view of a recent CIA report. The official did not concur with the CIA, frustrating Democrats.

The CIA believes Russia “quite” clearly intended to send Trump to the White House. The claim is a bold one and concerned Democrats and some Republicans who are worried about Trump’s desire to mend relations with an increasingly aggressive Russia. The CIA report was “direct, bold and unqualified,” one of the officials at the meeting told The Washington Post Saturday.

The FBI official was much less convinced of the claims, providing “fuzzy” and “ambiguous” remarks.

Make no mistake that the Washington Post article is the ‘Fake News’ the mainstream media has been warning you about. The Post create a propaganda piece for the deep state that was parroted across the 24-7 media echo chamber crowing about anonymous CIA officials, while nothing is said about FBI counterintelligence official completely refuting the CIA assessment’s validity.

Highly respected investigative journalist Glenn Greenwald labeled the Washington Post’s CIA story, in an article for the Intercept, “classic American journalism of the worst sort,” highlighting that, “the key claims are based exclusively on the unverified assertions of anonymous officials, who in turn are disseminating their own claims about what the CIA purportedly believes, all based on evidence that remains completely secret.”

At best, the impetus behind these moves is to constrain Trump’s anticipated rapprochement with Russia by further tainting public perception of a U.S.-Russia reconciliation by intimating that Trump in some way won the U.S. presidency with the assistance of Russia — a continuation of a common theme of the Clinton campaign.

At worst, they are signs that the CIA and U.S. intelligence community are essentially trying to interfere in the US presidential election as they have done in foreign countries on over 70 occasions since WWII — in an effort to install their preferred candidate.

For more information on some of those incidents Google:

That is just a short summary, as the list goes on and on.

In assessing the different interpretations by the CIA and FBI, the Post noted that the disagreement between the agencies comes down to “cultural” differences. The CIA is an agency that is “more comfortable draws inferences” from behavior, while the FBI “wants facts and tangible evidence to prove something.”

The competing messages, according to officials in attendance, also reflect cultural differences between the FBI and the CIA. The bureau, true to its law enforcement roots, wants facts and tangible evidence to prove something beyond all reasonable doubt. The CIA is more comfortable drawing inferences from behavior.

“The FBI briefers think in terms of criminal standards — can we prove this in court,” one of the officials said. “The CIA briefers weigh the preponderance of intelligence and then make judgment calls to help policymakers make informed decisions. High confidence for them means ‘we’re pretty damn sure.’ It doesn’t mean they can prove it in court.”

The FBI is not sold on the idea that Russia had a particular aim in its meddling. “There’s no question that [the Russians’] efforts went one way, but it’s not clear that they have a specific goal or mix of related goals,” said one U.S. official.

In summation, the Post and the rest of the corporate media have decided that “facts and tangible evidence” are unnecessary, when the CIA can just “draw inferences” without providing any evidence.

The intelligence community/deep state propaganda war, operating in concert with the Clinton campaign and other Democratic operatives, was an ingenious strategy really. They planted these seeds of possible Russian interference in the public psyche during the Clinton campaign, and have now nurtured them to fruition after the Trump presidential victory.

Essentially, these interests now you have a built-in audience of angry Clinton voters who are upset they lost, with a strong confirmation bias to accept unsubstantiated propaganda without evidence. We can see how that worked out in Iraq (WMD’s) – when the media, who colluded with the aforementioned, runs with the story as fact. The ‘Russians did it’ story, perpetuated by intelligence interests that loathe to see Trump take office, is then easily accepted by these angry partisan voters as truth.

What a dangerous proposition to accept without any evidence, and yet so many people already have — but then again, that is what propaganda is all about. If the intelligence community tries to steal this election, be warned that violent revolution is a likely outcome, as many Americans won’t stand for a soft-coup, which is exactly what is likely transpiring.

Former CBSHealthwatch Reporter: “‘The Virus’ Is One Of The Greatest Frauds In Modern History”
July 9th, 2020 Sons of Liberty Media

Six months before the pandemic, Bill Gates negotiated a $100 million...