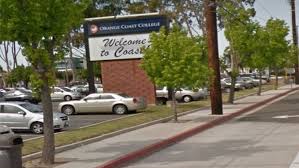 A California college professor has discovered actions have consequences.

Olga Perez Stable Cox, who teaches human sexuality at Orange Coast College in Costa Mesa, CA, went into hiding after a video of her ranting to her students that the election of Trump, whom she calls a “white supremacist,” is “an act of terrorism,” was posted on Facebook. Her teachers’ union claims that she had received death threats.

Here’s the video, which was secretly recorded by one of Cox’s students a week after the election, followed by my transcription of what she said:

Cox: “… white supremacist and vice-president is one of the most anti-gay humans in this country, and so we are in for a difficult time. Then again, I do believe that we can get past that. Our nation is divided [inaudible], it’s an act of terrorism. One of the most striking things for me and most people in my life is that it is not some stranger from a country that’s coming in and attacking our sense of what it means to be an American — things that we stand for. That makes it more painful because I’m sure all of us have people in our families and our circle of friends that are part of this movement and it is very difficult. We are waiting on Republicans and Democrats, and we’re really back to being a civil war, and I don’t mean it in a defining way, but our nation is divided, clearly, as [inaudible] other times. And my hope is that we will get good leadership to help us to overcome by providing some coping skills [inaudible]. First of all, we are a majority. More of us voted to not have that kind of leadership [inaudible] because of the way our Electoral College is set up. But we are a majority and that’s helping me feel better….”

Roxana Kopetman reports for the Orange County Register, Dec. 13, 2016, that news of the threats against Olga Cox came to light as hundreds of people turned out at the college to demonstrate in support of her and against her.

Rob Schneiderman, president of the Coast Federation of Educators/American Federation of Teachers Local 1911, said that Cox and the college have received more than 1,000 emails, phone calls, and Facebook comments. He claims that “Someone emailed her a picture of her house, with her address,” and called Cox a “libtard, Marxist, hatemonger, nutcase” and said “her home address is now going to be sent everywhere.” Others threatened her livelihood, some her life. One email said, “You want communism, go to Cuba … try to bring it to America and we’ll put a (expletive) bullet in your face.”

Schneiderman described Cox as a “lesbian, Latina woman living in Orange County. She’s pretty strong.” But threatening emails and phone calls to her private number were too much, and a substitute will cover her classes this final week of the semester.

On Monday, hundreds of students and faculty members who support Cox gathered for a noon rally on campus. Carrying homemade signs calling for free speech, they defended the teacher they described as someone dedicated to protecting all students, including those who are LGBT and students of color.

A smaller group – with students from the College Republicans, which made the video public – also was on hand. They set up a computer to continuously play Cox’s recording, in which she referred to white supremacy and called the vice president-elect “one of the most anti-gay humans in this country.” Those students countered that the issue is not about academic freedom but is an instance of a college instructor pushing her own political agenda, something they say is prevalent on college campuses nationwide.

Vincent Wetzel, who said he is a gay student who has attended some of Cox’s LGBT panels, said, “This has nothing to do with free speech. It’s a professor overstepping her profession. Of all the people who are supposed to provide an inclusive environment, it’s her. Now, I don’t feel comfortable.”

Two students in Cox’s class said she asked those who had voted for Trump to identify themselves.

Tanner Webb, 21, of Huntington Beach, who describes himself as apolitical and Cox as “a good teacher,” said, “She tried to get everyone who voted for Donald Trump to stand up and show the rest of the class who to watch out for and protect yourself from.” Webb said he chose to speak up after reading comments in the Register from Schneiderman, the faculty union president, defending Cox as “known for her open and engaging ways in class.” But Webb said that “Professor Cox’s anti-Trump rant was no open debate to engage students.”

Schneiderman has a different version of what happened: Cox told the class some people would be happy with the election results, and a student stood up in approval. She then invited others to stand up and show their support if they wished, he said.

Shawn Steel, the Republican national committeeman from California and an attorney who is representing Orange Coast College Republicans, brought the matter to the administration’s attention Nov. 23, a week before the group went public with the video. At that time, Steel wanted Cox, a tenured professor, to apologize. Now, with students saying she tried to separate and shame Trump supporters, Steel said school officials should consider firing her. “That’s a deal-breaker for me,” he said.

School administrators said they are investigating Steel’s complaint and also whether the student who taped the teacher should face sanctions for recording her without permission.

Since the initial video surfaced and made national news, a second video clip has been posted online from the same class, with Cox expressing more of her political views and vowing to keep her students safe from any acts of racism and prejudice. She said: “Living in Orange County is scary, when you know you are surrounded by so many people that are so hateful. But I am optimistic that we are the majority and that we will make a difference.”

According to Channel 2, the Los Angeles CBS affiliate, the teacher’s union is threatening to sue the student who recorded Cox, Joshua Martinez, who is a member of Young Republicans. But Martinez will not back down by removing the video from his Facebook page, although he fears he will be suspended or even expelled from the college.