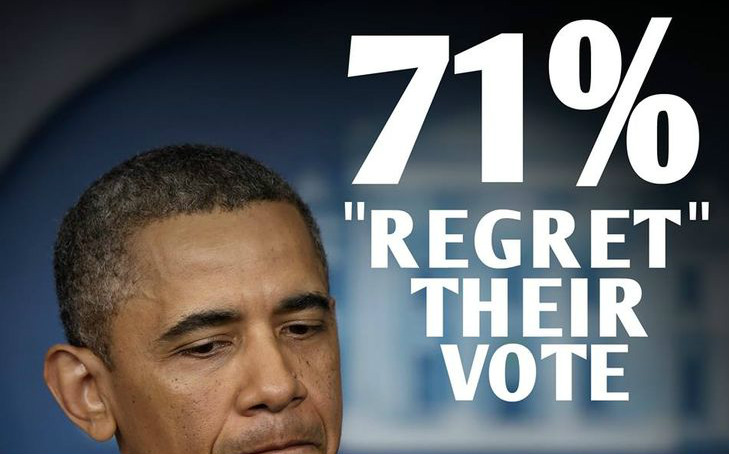 One of his most faithful worshippers—The Washington Post—posed the perfect question for The Perfect President shortly after his Democratic Party went down to a crushing defeat in the 2016 presidential election. Was this a referendum on the preceding eight years of his presidency?

How do you think Barack Obama answered?

Millions of Americans had voted with their heart and soul praying to be delivered from Obama’s disastrous administration. As much as they disliked Hillary Clinton, this pro-Trump turnout was motivated more by Obama than by Hillary. The word on the street and in the conservative press was “Please, dear God, no Obama third term.”

Of course, since his narcissistic personality had suffered an unmistakably negative referendum, Obama would certainly engage in denial.

For Obama it was a time for a deeper super intelligence, soul-searching moment of true confession of his deepest, darkest secret—if you know how to decode projections, you will hear it. Simply take the topic he’s talking about and apply it to him.

To truly understand the often-irrational mind of Barack Obama—to put it clinically– we must grasp that Obama possesses an unconscious super intelligence that quick-reads him instantaneously and projects in specific imagery his huge flaws—proverbial logs in his eye—onto others.

But the projection also represents great wisdom and a model of correction if applied to himself (his super-intel’s goal). This monumental paradigm shift in psychology allows us to understand unconscious communication and the human mind’s startling super-intel awareness of conflicts and ideal resolution.

This new knowledge about the human mind allows us to fully grasp a man’s meaning.

And voters also possess an unconscious super-intel that secretly reads Obama’s projections and his contradictory behavior. This is the reason why people often say trust the voters—because voters pick up on the deeper truth, with exceptions such as the 2008 and 2012 elections.

Those exceptions were the result of the mistaken notion that America had to anoint its ‘first black president” to prove its national self-righteousness.

Back to the great question for Obama—“was the loss to Trump a referendum on you, sir?” Without the slightest hesitation in his Washington Post interview Obama descended into massive denial and then delivered a treatise on unconscious awareness and projection of exactly who he is. Listen up.

In projection code—talking of Republicans but really of himself—he reveals in key imagery he’s an illegal president. He continues to admit how devastating that has been for the United States. Unconsciously he offers this as a central explanation why the Democrats lost the election. Secretly he sees that the people knew.

He strings together repeated imagery symbolic of his illegal presidency, together forming the thoughtprint pattern that confirms his unconscious symbology—the encoded central message.

First he warns that Republicans must “guard against a crude nationalism” taking root in the U.S. Think of it this way: as an illegal president Obama crudely claimed American citizenship outside the rule of law. Indeed, over the course of his administration he has continually violated one law after another.

He warns Republicans to guard against an exclusive “ethnic identity,” pointing to his exclusive role as “first black president” which allowed him to escape any vetting of his illegal presidency. Anyone who questioned his citizenship was immediately labeled racist. The media followed in lockstep labeling those who wanted him vetted as wacky birther conspiricists.

Obama further warned Republicans of “tribalism built around us and them,” again alluding to his tribal Kenyan birth. He divided the country into “us and them,” his supporters versus those who questioned his legality.

No discussion of an illegal presidency was allowed. It was “don’t question me” or “you’re involved in the birther conspiracy.” Could he really get away with hiding his complete records all the way to the White House? Indeed he did, before finally producing a phony birth certificate in 2011 as determined by Sheriff Joe Arpaio’s Cold Case Posse in Arizona’s Maricopa County. Of course the media ignored the finding.

Arpaio’s team has a new report due to be released on December 15 which should further substantiate Obama’s federal law violation with crucial new information. Of course the media will ignore the findings—ever the Obama legacy makers.

Obama continues projecting. He said there was a “mismatch” between his 56 percent approval rating before the election and the Democrats losing the White House. He insisted, “people think I did a pretty good job.” Except he forgot about the far larger unconscious mind of voters and his own. First he confesses that, as an illegal president, he was a “mismatch” for the presidency.

He fails to understand that approval polls are conscious votes, but in a highly charged politically correct racial environment many will speak politely of him but vote differently. The groundswell for Trump reflected just how passionately people opposed Obama. Millions of Americans are understandably incensed at his treatment of them and their beloved country.

Deep down Obama’s super-intel sees that the people picked up on his great secret, his unconstitutional presidency. He explains how this was a major underlying factor in Trump’s election.

Obama recognized a common theme in populist movements her and in Europe—specifically referring to his illegal presidency. He declared that people had been disrupted “in very concrete ways” by “globalization.” In other words, his illegal global presidency resulted after he came to us secretly as a citizen from another part of the globe. No wonder he often showed more interest in other countries than America. That was a very concrete way of being a “global” president.

Obama’s super-intel imagery clarifies how citizens saw through his illegitimate presidency—either consciously or unconsciously. He sets up his punch line—the clearest image of his illegal presidency—when he commented, “psychologically people are less certain of their [his] national identities or their [his] place in the world. It starts looking different and disorienting.”

In other words, people caught on psychologically to his foreign national identity and his lack of place in America. Increasingly his decisions looked different—un-American. His illegal presidency was disorienting to citizens who had never seen anything like it.

Many Americans consciously realized he was an illegal president, but many others picked up on it in their intuitive far-seeing subconscious.

In another interview on December 8 with CNN’s Fareed Zakaria, Obama again confessed unconsciously that his presidency was illegal. He overtly mentioned the subject in a classic “thou protests too much” denial confession. He blamed opposition to his presidency on racism by prejudiced birthers—again linking it to Trump’s election. It’s as though he’s saying, “I must incessantly mention that I’m not an illegal president to secretly confess I am one. I cannot let the subject go—continually projecting my blame onto birthers. Secretly I know voters spotted this admission.”

The gospel of distorted thinking

Why is it crucial to grasp Obama’s subconscious confessions of his illegal presidency now? His guilt is fueling his distorted thinking as he tries to achieve his legacy goal of reshaping the opinion of millions of citizens.

Secretly he has every intention of carrying out an intellectual bloodbath, disorienting the people’s thinking—persuading from within, Alinsky-style—to embrace virtual lawlessness by calling it normal.

Convinced they are entitled to make up their own laws, millions have already swallowed the mind-altering Kool-Aid. Everything goes, whatever I say is right, and if people learn to group-think like this—we will conquer the world as we destroy it and ourselves.

In another projection Obama confesses precisely how he gains a following by enabling others to violate the rule of law and in turn support his illegal presidency and irrational thinking. He notes how Republicans “dangerously discriminate” against minority groups and “prevent blacks, Latinos, or gays or women from participating in rebuilding America.”

But secretly he’s talking about himself, how he creates various groups of minority victims to discriminate against law-abiding citizens to divide the country.

In The Washington Post interview he continued to attack our culture, insisting conservatives lack character and values. He implemented his new moral compass with familiar propaganda buzz words such as fair, inclusive, non-discriminatory and uniting. But secretly he’s divisive, subverting the truth, subverting natural law.

The truth is whatever Obama wants to make it—because deep down like all rule violators he fears accountability to The One to whom our deeper moral compass points. But his all-seeing super-intel possesses a God-given natural law moral compass that compels him to tell the truth. Making up his own rules unknowingly violates his very essence.

Obama is not done doing his damage.

Obama’s the great divider because he himself has been deeply divided since birth. During his horrific childhood he was programmed to assault America as an unconscious Stockholm Syndrome victim to radical Islam. (See my book, The Stockholm Syndrome President: How Trump Triggered Obama’s Hidden Confession.) He truly remains a secret prisoner to destruction. Deep down he subconsciously confesses because he wants to be freed. Yet his shadow side continues to self-destruct.

ANDREW G. HODGES, M.D., is a psychiatrist in private practice, a former clinical professor of psychiatry (UAB School of Medicine), and a noted forensic profiler. Experts including FBI agents believe his unique “thoughtprint decoding” method will one day become a fixture in law enforcement much as identifying fingerprints. The <a href=”http://amzn.to/2dvnLgt”author of nine books, he has been interviewed extensively in the media with appearances on Fox News, CNN, ABC, MSNBC and Court TV. His website is AndrewGHodges.com