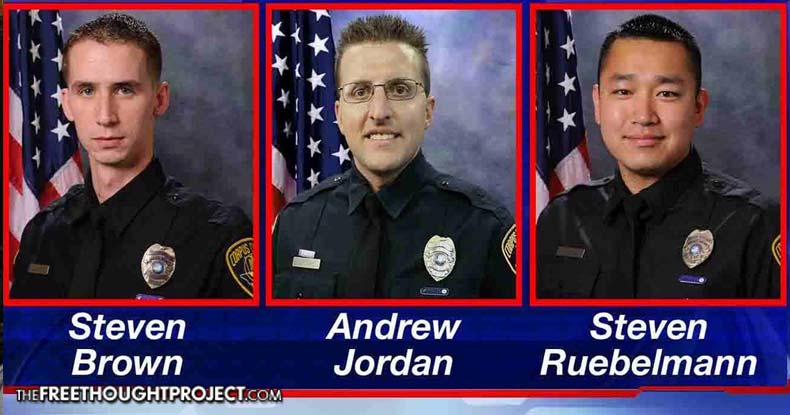 Corpus Christi, TX — Ray Rosas is a free man today after a jury of his peers found him not guilty of shooting three Corpus Christi police officers on February 19, 2015. On that day, early in the morning, CCPD executed a no-knock search warrant, forcing entry into the home without first knocking and announcing they were the police.

A flash bang grenade was fired into Rosas’ bedroom, reportedly stunning the 47-year-old, who then opened fire on the intruders. Three officers were wounded; officers Steven Ruebelmann, Steven Brown, and Andrew Jordan. Police were looking for drugs and Rosas’ nephew, who they suspected to be a dealer. However, the unnamed nephew was not home at the time of the raid.

Rosas spent nearly 2 years in jail awaiting trial, which concluded Tuesday with a Nueces County jury finding him not guilty. Rosas’ defense maintained, based on statements he made immediately following the shooting and later in jail that he did not know the men breaking into his home were police officers and there was no way he could’ve known, having been disoriented by the flash-bang stun grenade. “The case is so easy, this is a self-defense case,” said Rosas’ lawyer in closing arguments.

Rosas originally faced three counts of attempted capital murder, but the prosecution dropped those charges just before the trial began, opting instead to try him for three counts of aggravated assault on the police officers. The jury sided with his defense attorney’s argument he had a right to defend his home and found him not guilty on all charges.

Rosas’ case is further evidence that the State of Texas has a very real problem on its hands and may have set a precedent for other citizens caught up in the melee of a no-knock police raid. The Castle Doctrine, the Texas law which allows for an individual to defend a person’s abode, dwelling, even vehicles with deadly force, has surely been put to the test. In Rosas’ case, it appears as though the Castle Doctrine has survived yet another legal challenge, potentially setting the precedent that not even the police have the right to invade one’s home unannounced. Tuesday’s verdict may also bring hope to others who have fallen victim to police raids, and those who have chosen to stand their ground and shoot back at their home’s invaders. One such individual is Marvin Louis Guy.

As The Free Thought Project first reported in 2014, Guy is facing the death penalty. Guy shot and killed Detective Charles Dinwiddie and injured several other Killeen police officers, as they were attempting to forcefully enter Guy’s home on May 9, 2014, at 5:30 am. Police had been surveilling Guy’s home for some time after an informant claimed Guy was trafficking a large quantity of cocaine. At some point in the investigation, the decision was made to enter Guy’s home and attempt to find evidence which would corroborate the informant’s claim.

But after entering the residence, in a show of force which resulted in the loss of life of a veteran police officer, no drugs, not even a single marijuana joint was found, only a glass smoking pipe turned up. The consequence for the police incursion resulted in one detective’s death, and yet another Black man being charged with homicide. Guy’s fate is yet to be determined, as he is awaiting trial for Dinwiddie’s murder which, arguably, would not have occurred had the police not attempted to enter his home unannounced.

Even if the police had identified themselves before attempting to enter Guy’s home, there have been enough crimes committed by criminals posing as police, to justify Guy’s decision to defend his life from intruders. With Guy already being a convicted felon, more questions will likely be raised as to whether or not the Castle doctrine can be extended to convicted felons. The weapon Guy used, a 9mm, had been reported stolen. Likewise, his possession of the weapon was also another potential felony. But the question remains. Do all Americans have a right to defend themselves? Under current Texas law, convicted felons do not have a right to keep and bear arms for the protection of their persons or dwelling. According to many jailhouse interviews conducted by KDH News, Guy told reporters “he was simply defending himself when his bedroom window was broken out that morning.”

Complicating matters further for the prosecution in Guy’s case is the fact that a precedent has already been set in a similar case. As The Free Thought Project reported, charges against Henry Goedrich Magee were dropped following a TX grand jury’s refusal to indict Magee on capital murder charges for the shooting death of Burleson County Sgt. Adam Sowders, after the sergeant led a team of police officers into Magee’s residence using the same “no-knock” search warrant method. Magee claimed he was protecting his home and his pregnant girlfriend, the exact same claim Guy made upon his arrest.

After the grand jury refused to indict Magee, the case against him was dropped, just a few short months after the shooting occurred, quite a contrast from Guy’s imprisonment. Guy has been sitting in jail for two and a half years awaiting his day in court, held under three million dollars bond.

The discrepancies in the way Magee was treated and how Guy’s case is being handled hasn’t gone unnoticed. A petition to drop all charges against Guy was created on the Change.org website. A portion of the petition reads;

It is always a tragic, unfortunate event when anyone loses their lives, especially in the line of duty. But how can we essentially say that one person was defending themselves and another was committing murder, under such similar circumstances…No drugs were found in Guy’s house. Besides, if beyond a reasonable doubt is needed to convict, how can we be certain that Guy knew that the person(s) entering his home, at 5:30 in the morning, were peace officers, something required for the capital murder charge? Guy deserves to be treated fairly and the same as another man who acted in self-defense or what any other reasonable American would do.

For Guy’s supporters, possibly, there’s new hope that he will soon be set free. Rosas’ case may indeed serve as a precedent for Guy’s lawyers to file a motion that charges against him be dropped.