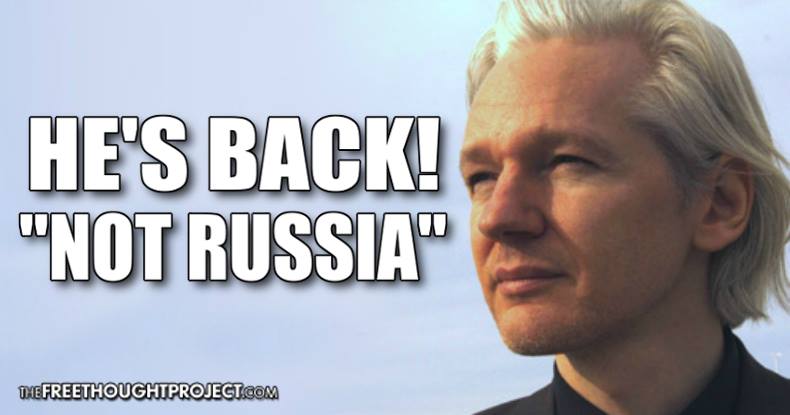 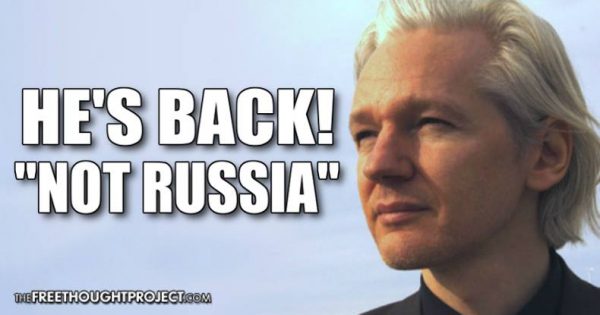 In an interview with Sean Hannity on Thursday, founder Julian Assange officially and definitively declared Russia did not provide hacked documents to Wikileaks — directly contradicting nebulous intelligence reports from unknown officials with the CIA.

“Our source is not the Russian government,” Assange told Hannity.

“In other words, let me be clear,” Hannity asked, “Russia did not give you the Podesta documents, or anything from the DNC?”

Wikileaks has been accused by the U.S. government of working in some sort of tandem with Russian state actors during the presidential election to hack Democratic Party organizations and provide damaging information about Hillary Clinton in order to sway the election in favor of Donald Trump.

Recently, and utterly absurdly, the Obama administration went so far as to accuse Russian President Vladimir Putin of being personally involved in this putative hacking — and that Trump had been aware of the effort since its supposed inception.

Despite innumerable attempts by Trump, Russian officials, and Putin to denounce those claims as completely invalid, the controversy has continued to rage and has driven a deepening cleft in the intelligence community.

One criticism of Wikileaks publishing of the documents and emails has been its seeming lopsided disclosing of information only damaging to the Democratic establishment — and seemingly nothing of the same about the Republican Party.

Asked to confirm whether or not Wikileaks had received hacked information from the Republican National Committee, Assange explained,

“We received about three pages of information to do with the RNC and Trump, and … but it was already public somewhere else.”

Hannity asked for the Wikileaks founder’s thoughts on claims from the CIA that Russian officials had actively and purposefully influenced the election, Assange said:

“Well, I think it’s very interesting. The key quote … is from James Clapper, on the 17th of November — James Clapper is the DNI, the Director of National Intelligence, who oversees all 17 U.S. intelligence agencies — and so his statement is (this is made to the House Intelligence Committee) ‘as far as the Wikileaks connection, the evidence is not strong, and we don’t have a good insight into the sequencing of the releases or when the data may have been provided. We don’t have good insight into that.’”

Assange also noted, without being prompted to the topic, that the ongoing effort to ‘flip’ electors away from Trump toward Clinton marks a dangerous precedent, as future administrations could employ the same method to stay in power after being voted out.

“Our publications,” Assange continued, “did make a significant influence during the elections — lots and lots of Americans talked them up, read them, analyzed them, forwarded them to each other. It was the most discussed topic, according to Facebook, throughout October.

“Then you have U.S. intelligence saying they don’t know how we got our stuff or when we got it, and us saying, we didn’t get it from a State. Then, there’s hacking of various systems that has occurred — a leading way to get intelligence: the Israelis do it, the Russians do it, the Chinese do it, the French do it, every year, every election cycle, to understand what policies are. So it’s no surprise at all that there’s record of Russians or others hacking all of these systems.”

In order to clarify definitively the information provided to Wikileaks did not come from any official State actor, Assange explained the publishing outlet did not want to provide any revealing details, but reiterated he had to in order to maintain the integrity of the leaks and combat distracting criticism.

“Here, in order to prevent a distraction attack against our publications,” Assange asserted, “we’ve had to come out and say, ‘no, it’s not a State party, stop trying to distract in that way, and pay attention to the content of the publications.’”

Hannity said, “So, in other words, when you say State party, it wasn’t another State — like Russia, or some other country?”

Noting Wikileaks, over the course of 10 years, has never been proven wrong, “not one single time,” Hannity asked whether Assange believes President Obama knows the source for Wikileaks was not Russia — and is only advancing the narrative for political reasons to damage Trump — he replied:

“Yes. It’s clear, if you look at the statements by James Clapper, you’ll see an earlier statement that U.S. intelligence is not aware of when we received material or how, it’s pretty clear that he must be getting those briefings as well, if the public is getting them. So, there’s a deliberate attempt to conflate … as far as the public is concerned, the only interesting thing that happened is that Wikileaks published a number of types of different information — the DNC publications, John Podesta’s, and the Clinton emails obtained under the Freedom of Information Act. So, that’s what’s interesting to the public.”

Discussing the idea the mainstream, corporate press has been manipulating the narrative to blame Wikileaks for, essentially, the content of published information, Assange said that while that was certainly the case, the mainstream press are now “old media” — and had only played the role of “paper tiger” this election season.

Assange also noted the press had repeatedly lectured the American public on behalf of Clinton — in part, by belittling Trump supporters — which “really turned people off. Because it seemed like those people, who already had a lot of social power, were telling you what to do, and so you wanted to do the opposite.”

But on the topic of the various leaks published by Wikileaks and others, Assange noted that some of the unknowns — like DC Leaks and Guccifer 2.0 — bore nearly too many characteristics reminiscent of the Russians. As if they were meant to appear Russian by another entity deeming it important to make the connection.

Perhaps one of the other most noteworthy items in Hannity’s interview had to do with another piece of disinformation — which has unfortunately haunted Wikileaks for some time.

Asked whether Wikileaks would have published comparable information if it had concerned Trump rather than Clinton, Assange stated without hesitation, “Absolutely. Yeah, no problem doing that at all.”

So, while Julian Assange remains a political prisoner under asylum in the Ecuadorian Embassy in London, he felt the need imperative enough to come forward — stepping out of Wikileaks’ comfort zone to do so — and slay all the absurd U.S. government propaganda touting election interference by Russian State officials.

It wasn’t Russia. It never was. This is a pure attempt by the Democratic establishment to deflect fallout from the publication of legitimately abhorrent information. The Russians Did It is a puerile attempt to conflate good, investigative, and thorough journalism by alternative media outlets and Wikileaks with a new Red Scare and war on dissent, disguised as a battle against ‘fake news.’

But fake news doesn’t get any less true than the current blame of Russia for all the Democrats’ woes.