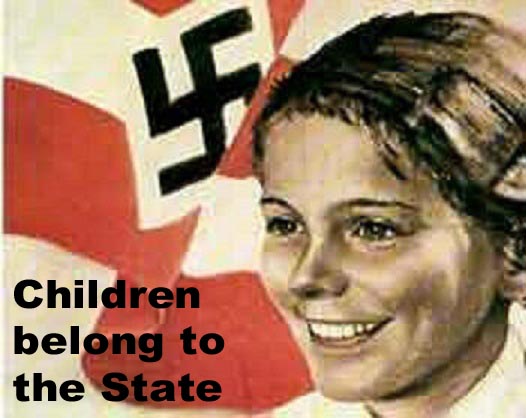 This article is dedicated to Patrick Wood, author of Technocracy Rising, a book everyone should read. Yesterday.

A bill introduced by the notorious Richard Pan, the mover and shaker behind the mandatory vaccination law in CA—this new one, SB18, is a grab-bag of generalities basically giving over care of children to the State.

Catch the flavor of the wording. It emerges like swamp gas:

As if all these outcomes could be delivered to children on a silver platter.

And the State would make it so.

This bill is basically setting up the population of California for state regulatory agencies to fill in the blanks later, to make specific controls out of the vague generalities in the bill. Get it?

“Medical care and nutrition and parenting and education are what we say they are. We define and enforce, you obey.”

SB18 is also an invitation to immigrants anywhere in the world who can get to California with their children, or will give birth to children after arriving: “Just be here and we’ll take care of you.”

But let’s go to the money. In SB18, a group is referred to: the Peninsula Partnership Leadership Council (when you go to “Assembly Concurrent Resolution No. 80” referenced in SB18):

“Assembly Concurrent Resolution No. 80 (Res. Ch. 101, Stats. 2009) declares the Legislature’s support of a Bill of Rights for the Children and Youth of California that resolves to invest in all children and youth in order to achieve specified goals to create an optimal environment for their healthy development.”

This Council has already written a children’s bill of rights, and SB18 is saying this is the model. This is the framework. This the pattern they’re following.

Pay attention. This is where it becomes VERY interesting.

The Peninsula Partnership is a group organized within the San Mateo County Office of Education. One piddling little California county education department.

The Peninsula Partnership Leadership Council (PPLC) is composed of the San Mateo County Superintendent of Schools, the County Board of Supervisors and the Silicon Valley Community Foundation.

It’s a non-profit that has assets of $7.3 BILLION. It runs 1800 philanthropic funds. Here are some of its corporate partners:

For some reason, this huge Foundation is pushing a children’s bill of rights that is reflected in a new CA bill, SB18, that will eventually make the State the top-dog controlling force over all children in California.

You can bet these corporate partners will reap profits. Beyond that, this is their version of a MASSIVE social engineering program. And that program is part of a technocratic movement to plan, format, and run the lives of the population from cradle to grave, because…

They should rule the future because they can plot and chart it out, based on their version (you weren’t consulted) of “greatest good for the greatest number.”

The best place to start? THE CHILDREN.

This is TECHNOCRACY INC. at work.

This is what’s behind SB18, and none of the hi-tech giants see a problem at all. All they see is a “scientific” solution that’s best for everyone.

They’re taking new steps and leading us into the promised land.

This is the big picture, and it’s bigger than any election or political party. It’s THE PLANNED SOCIETY.

It absolutely ignores your freedom or independent choice.