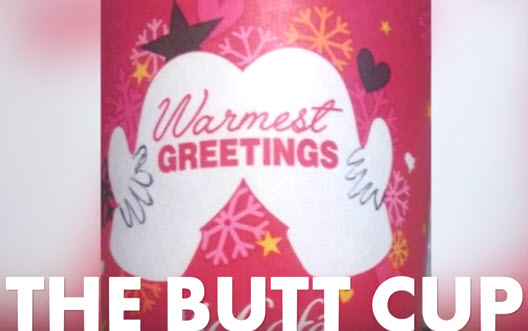 This is being reported as an honest mistake. Surely they wouldn’t do this on purpose, would they? (<– That was both rhetorical and sarcastic.)

McDonalds has come under fire for putting a subliminal of a butt on their “warmest greetings” holiday cup.

Well, not officially… They just happened to position two mittens at a certain angle so it can easily be turned into a pair of hands spreading a pair of butt cheeks apart.

Once you see it, you can’t unsee it.

Now how the hell are Starbucks cups in the news again and no one's talking about a guy spreading his cheeks open on McDonald's cups pic.twitter.com/QmIuZiDJst

Just… see for yourself:

Accident? That’s not even how the company is portraying it. In fact, they aren’t directly addressing it at all except to claim the design is really just mittens and people are reading too much into it. They told HuffPo:

“Our festive McCafé cups are of mittens not hands. The altered image circulating on social media is the result of someone getting a little cheeky and adding some hand-drawing to a cup.”

A little “cheeky” eh? How clever. The company doesn’t seem all that concerned that its customers are walking around drinking brown liquid out of a cup that many people think has a giant butt on it.

As Inverse.com points out in “Your Brain Is Programmed to See the McDonalds Butt Cup”:

The McDonald’s mittens are not ambiguous stimuli — they were clearly and purposefully designed by some ad person. But the pareidolia phenomenon [an information-filling phenomena of the brain] also touches on the fact that the brain is a predictive organ. If it wasn’t clear to you at first that those white spaces were mittens, then the mind will jump to the first thing that does make sense — and here, what makes sense for a lot of people is a butt.

Believe it or not, this managed to get even worse; the NSFW cup has been made even more disgusting by poking a hole in it.

This is in poorer taste than the time the restaurant gave this happy meal toy to kids.