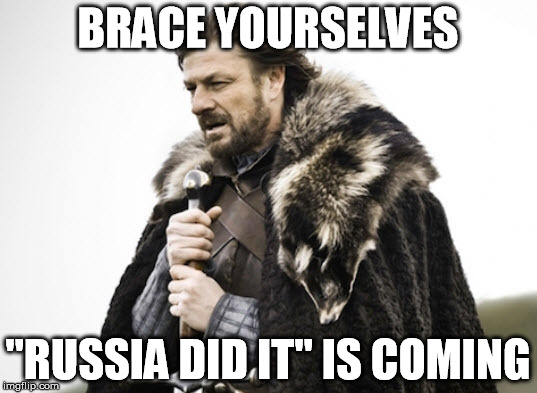 And right as Podesta breaks his silence since the election to come out demanding US intelligence behind the claims that Russia hacked our elections, too.

The case was supposed to go to court in May in Cambridge but, after Mr. Bukovsky, 73, entered a not-guilty plea it was delayed until Dec. 12. This followed a prosecution request for more time to review an independent forensic report on what had been found on Mr. Bukovsky’s computers and how an unidentified third party had probably put it there.

“The whole affair is Kafkaesque,” Mr. Bukovsky said in an interview. “You not only have to prove you are not guilty but that you are innocent.” He insisted that he was the victim of a new and particularly noxious form of an old K.G.B. dirty trick known as kompromat, the fabrication and planting of compromising or illegal material.

Old-style kompromat featured doctored photographs, planted drugs, grainy videos of liaisons with prostitutes hired by the K.G.B., and a wide range of other primitive entrapment techniques.

Today, however, kompromat has become allied with the more sophisticated tricks of cybermischief-making, where Russia has proved its prowess in the Baltic States, Georgia and Ukraine. American intelligence agencies also believe that Russia used hacked data to hurt Hillary Clinton and promote Donald J. Trump in the U.S. presidential election, according to senior officials in the Obama administration.

Russia’s cyberwarriors serve a multitude of goals, including espionage, the disruption of vital infrastructure — as happened in Ukraine last year when nearly a quarter of a million people lost electricity after a cyberattack on three regional energy companies — the discrediting of foes and the shaping of public opinion through the spread of false information.

Gee. It’s like The New York Times is acting as if they’ve never heard of the dirty tactics of the CIA… or the CIA, period.

So now the narrative is just going to collapse on itself. Next they’ll probably work around to blaming the entire Pizzagate debacle on Russia wholesale, then go back to claiming any alternative media outlets that dared to report on the potential veracity of Pizzagate are Russian propagandists — once again by shoving it all under narrative that Pizzagate was just a Russian operation.