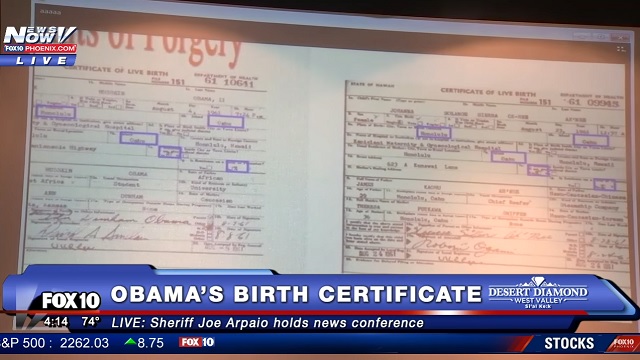 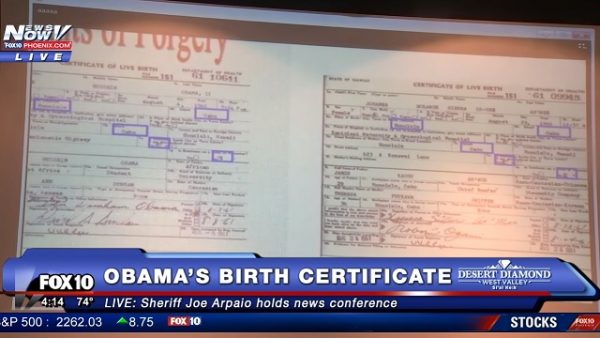 This is a must watch.

Sheriff Joe Arpaio and his team claim to have found one of the source documents from which Obama’s birth certificate was allegedly forged.

The office of Maricopa County, Ariz., Sheriff Joe Arpaio presented what it characterized as proof that the birth certificate the White House offered as evidence of President Obama’s American birth is not real.

Arpaio began the press conference Thursday in Phoenix by assuring reporters the office had “followed the evidence” and would have been just as satisfied if it had determined the certificate was authentic.

In the hour-long presentation, Arpaio’s lead investigator, Mike Zullo, made the case that the certificate was created from a “source” document: the birth certificate of Hawaiian Johanna Ah Nee, who was born within weeks of Obama in August 1961.

The Ah Nee document was originally obtained from investigative journalist Jerome Corsi, the author of several books and a contributor to the website World Net Daily.

According to Zullo, two separate forensic expert sources from two continents — Reed Hayes from Hawaii and the For Lab team in Italy — reviewed the Obama certificate and concluded it was not authentic.

Zullo told reporters Hayes has 45 years in the field and originally did not want to take the case because he is an Obama supporter and voted for him twice.

After reviewing the Obama certificate, the court expert stated, “I can’t clear this. There is something wrong with it.”

Zullo showed a video to reporters that purported to demonstrate how the date stamp in two different boxes on Obama’s certificate had the exact angle and placement, matching one of the date stamps on the Ah Nee original.

The investigator stated this was nearly a statistical impossibility.

He also said two boxes on the Obama certificate were marked in the exact same manner as the Ah Nee document running into words above, leading his team to believe they had been lifted and inserted into a created certificate.

Skip to 13:00 if you’re short on time and just want to see the strongest evidence it’s a forgery.

I’d love to see Trump reopen this investigation just to trigger liberals into losing their minds.