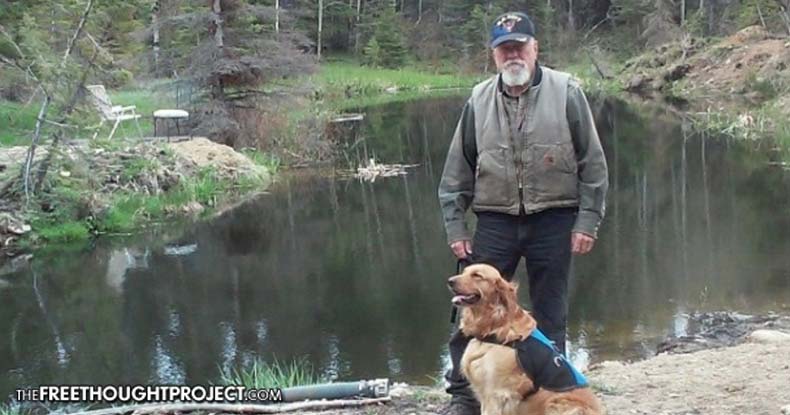 Basin, MT — When Congress passed the Clean Water Act in 1948, it was an attempt by the legislature to control the pollution of which so many Americans were being made aware. But little did Congress know, at the time the bill became law, that it would create a dragnet which would net a catch of seemingly law abiding citizens.

There’s no question Joe Robertson liked to thumb his nose to federal authorities over what he believed belonged to him, and what he thought was property of the federal government. At one time, Robertson, a disabled vet who suffers from PTSD, owned a gold mine called the Manhattan Lode. The Robertsons even moved up to their claim, in an effort to apparently carve out a homestead in the hills above Basin, Montana.

There were several run-ins with authorities. Robertson had built several structures on federal land (fence, barn, etc.), but when he decided to build 9 watering ponds on his property, that’s when it all went South for the 77-year-old veteran. Agents from the EPA, the Forest Service, the U.S. Army Corps of Engineers, the Jefferson County undersheriff, and the chief deputy attorney, all descended on Robertson’s property to inspect what they considered to be a violation of the Clean Water Act.

Robertson’s property had already been sold to a real-estate agent, a transaction the Robertsons’ dispute, and three of the ponds were also reportedly built on federal land as well as six on what used to be his own.

Every town in the U.S. probably has a Joe Robertson; someone who feels like their property is theirs to do with what they wish. But those folks often meet a cruel fate when the government, especially the federal government, gets involved. The Justice Department filed a criminal case against Robertson, and the senior citizen was sentenced to 18 months in federal prison for damaging wetlands and waters belonging to the United States.

The EPA celebrated their victory within a Justice Department announcement. “Following a four day federal trial, a Montana jury found Joseph David Robertson, 77, guilty on two counts of unauthorized discharge of pollutants into waters of the United States and one count of injury or depredation of United States property,” part of the statement reads.

The Justice Department explained their case against Robertson, “The United States introduced evidence and expert testimony from the Army Corps of Engineers and the EPA that the stream and wetlands had a significant nexus to traditional navigable waters, and therefore were “waters of the United States.” The keywords in the statement “wetlands” and “waters of the United States” are the ones federal prosecutors used to put Robertson away. And it’s those same words with which Senator Rand Paul (R-KY) takes umbrage.

Paul wrote, in his book titled, Government Bullies, “The Clean Water Act never even mentioned the term ‘wetlands’ while passing through Congress for approval. The unelected bureaucracy (EPA) simply created the concept and defines it in distinct terminology dependent upon whatever scenario they are currently considering. ‘Wetlands’ quite literally can mean whatever the EPA wants it to mean. The definition of wetlands has become so absurd and transparent that the Army Corps of Engineers developed the ‘migratory bird theory.’ This theory states that if your land is a stopping point for any migratory bird that has traveled between real navigable waters, then your land is now de facto connected to the interstate navigable streams. I’m not kidding. This theory is irrational & completely illogical. How did it ever become enforceable law? It happened because Congress has abdicated its duty in this area. Citizens often run afoul of these rules inadvertently due to the constant evolution of complex and unexplained regulations.”

In an attempt to remain neutral in Robertson’s case, but also to draw a comparison, when the BP oil spill took place in the Gulf of Mexico, on April 20th, 2010, a massive explosion on the off-shore oil rig took the lives of 11 oil rig workers, and resulted in history’s largest discharge of crude oil into the surrounding waters. The ruptured well resulted in the release of an estimated 4.9 billion barrels of crude oil into the Gulf, making it the largest marine oil spill in history.

The same Justice Department which sent Robertson, arguably an elderly old codger who liked picking small, school-yard types of fights with the federal government, had also investigated the BP oil spill. According to Reuters, “A Justice Department probe into the spill led to criminal charges against just four, mostly lower-level BP employees. The other rig supervisor, Robert Kaluza, was acquitted in February by a jury of the same pollution charge as Vidrine’s. Kaluza and Vidrine previously faced manslaughter charges, but those were dropped. Former BP Vice President David Rainey was acquitted by a jury last June of charges he lied to federal agents about how much oil was spilled. The fourth defendant, engineer Kurt Mix, was sentenced to six months of probation last November after pleading guilty to damaging a computer, a misdemeanor.”

The result: no one spent one day in prison. Not one person, involved with history’s largest oil spill, spent one day behind bars as a convict. But let a squatting gold miner dig a few ponds on what he considered to be his own property, and admittedly a little sliver of federal land, and the government showed no mercy. And he isn’t fairing well in prison, reportedly. His wife told reporters he’s been kept in solitary confinement, has suffered fainting spells, and is in overall poor health.

After the conviction, an independent environmental consulting firm, Kagel Environmental, LLC, Nationwide Wetlands, Waters & Wildlife Consulting, located in Rigby, Idaho 83442, conducted a pro bono evaluation of the property the federal government claimed had led to harmful pollution of “wetlands” in violation of the Clean Water Act.

Robertson’s family gave the Free Thought Project a copy of this report. The firm concluded that the area where Robertson built his ponds could not be considered “wetlands,” nor did they find a single sliver of evidence that Robertson caused pollution.

The EPA lied to throw an innocent man in prison.

KE also concluded Robertson was within his rights to proceed with excavation without being compelled to acquire a permit because the ponds were relatively small in nature and were being used to feed livestock and wild animals. “KE observed that the pond construction, either within the narrow channel of the intermittent creek or adjacent wetland, did not appear to have required a permit since the work was accomplished via non-regulated excavation,” they wrote taking note of the small farm equipment he used to construct the ponds in question.

Furthermore, the report added, “We understand that the pond excavation was accomplished using a Case 780 trackhoe with a 36-inch wide bucket and/or a 580 Case backhoe with a 24-inch wide bucket. Any dredged material dripping from the bucket back into the water or wetland is considered an incidental fallback and therefore not subject to any requirement for a Section 404 permit (Tulloch Rule).” The firm found that Robertson did not need the federal permit required for the ponds’ construction because his equipment was not considered heavy-equipment and the dredged drippings would be inconsequential.

Ironically, the independent evaluation also found that Robertson may have actually done the federal government a favor by creating the ponds. They write, “KE determined that the creation of Ponds #1, #2, and #3, which we understand are located on USFS lands, have actually enhanced the aquatic resources relative to the intermittent channel and adjacent wetlands.” From the KE report, one could conclude Robertson was within his rights to construct the ponds, they weren’t located in a “wetland”, and while he may have erred in building ponds on federal property, the environment is now better off as a result.

Ultimately, the fate of Joe Robertson came down to an issue of property rights, states’ rights, and the federal government. Did he have a right to construct ponds on his own land? Could the State of Montana have dealt with Robertson on their own without the heavy-handedness of the federal government’s intrusion and ultimate prosecution of the aging veteran? And is it fair that the BP officials can get away with the largest case of pollution in the history of mankind, yet one cranky old mountain man can’t get away with building ponds to feed his animals?

These questions and more reveal the sad state of affairs in America, where corporations are given free passes, and the rights of the individual to live as he pleases get trampled.