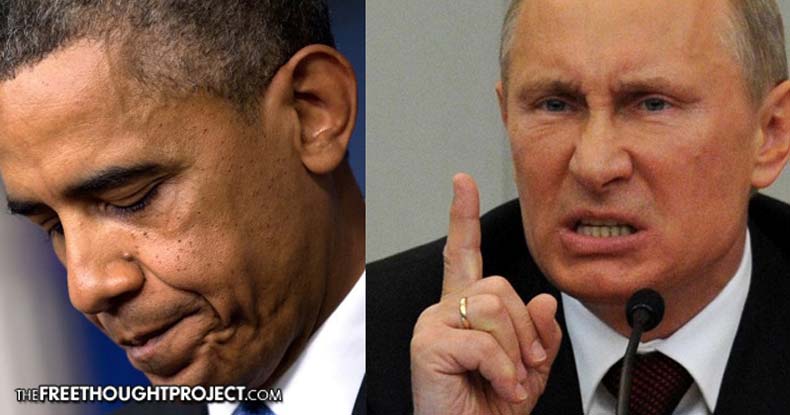 Washington, D.C. – After the outlandish claims made by U.S. officials, that Russian President Vladimir Putin personally “hacked the US presidential election,” Putin has had enough of the relentless barrage of unproven allegations, and laid down the gauntlet to the U.S. President Obama.

“Either stop talking about it or finally provide some evidence. Otherwise, it looks indecent,” Kremlin spokesman Dmitry Peskov told reporters in Tokyo on Friday.

Blatantly operating as a propaganda outlet for U.S. intelligence/deep state interests, working in collusion with Democratic party elements, The Washington Post reported this week that anonymous sources claimed, “the CIA concluded in a secret assessment that Russia intervened in the 2016 election to help Donald Trump win the presidency, rather than just to undermine confidence in the U.S. electoral system.”

Then, Barack Obama, on Thursday, announced that the United States will “take action” at the “time and place of our choosing” in response to unverified CIA claims of hacking by the Russian government – an allegation which remains unproven and extremely suspect. He noted that a U.S. response “may be explicit and publicized,” and that “some of it may not be.”

The Russian government responded by warning that Obama’s threat to “retaliate” to the alleged cyber attack, without providing any evidence, would be a violation of “both American and international law.” Peskov hinted at of an open-ended escalation if Obama chooses to launch a cyberwar against Russia at today’s scheduled press conference.

Russia’s foreign minister, Sergei Lavrov, citing a report by NBC news that alleged U.S. officials believe with a “high level of confidence” Putin was personally involved in a secret campaign to sway the election in Trump’s favor, said he was “dumbstruck” by the allegations.

“I think this is just silly, and the futility of the attempt to convince somebody of this is absolutely obvious,” according to state television outlet Russia 24.

Of course, that is the game that is being played by the U.S. – lots of allegations with little to no disclosure of evidence to back the accusations. While the CIA, in an anonymous leak, attempted to conflate alleged Russian hacking with Trump’s election win, both the FBI, and the Office of the Director of National Intelligence (ODNI) have dismissed the CIA’s intelligence community’s assessment, for there being a complete lack of evidence of a specific intent.

Increasingly, it looks as if the entire “Russia did it” conflation is an attempt by deep state/military industrial complex interests to destroy any potential rapprochement between the U.S. and Russia once president-elect Trump takes office.

Additionally, according to an NBC report, the Eurasia Group, a team of political risk consultants, noted on Friday that they believe the Obama administration is likely to engage in actions which will likely create significant barriers for the Trump White House’s anticipated reconciliation with Russia.

“It is unlikely that U.S. intelligence reports will change Trump’s intention to initiate a rapprochement with Moscow, but the congressional response following its own investigations could obstruct the new administration’s effort,” Eurasia Group analysts reported.

On Thursday, Peskov told the AP that the allegations against Putin were ultimately “laughable nonsense,” while Russian foreign ministry spokesperson Maria Zakharova noted that “Western media” were acting as a “shill” and “mouthpiece of various power groups.”

In a humorous move, poking fun at the lack of credibility of the U.S. administration, and suspect nature of the “Russia did it” narrative being driven by western corporate media stooges, WikiLeaks posted on Twitter that “Obama should submit any Putin documents to WikiLeaks to be authenticated to our standards if he wants them to be seen as credible.”

Obama should submit any Putin documents to WikiLeaks to be authenticated to our standards if he wants them to be seen as credible.

The message to the U.S. administration is clear – Russia doesn’t believe you and neither do the American people. With strong accusations must come clear and concise evidence to match, and thus far none has been provided. Increasingly, it looks like military/intelligence interests are colluding to push their agenda in a covert attempt to preside over, and dictate policy to, the U.S. civilian government.