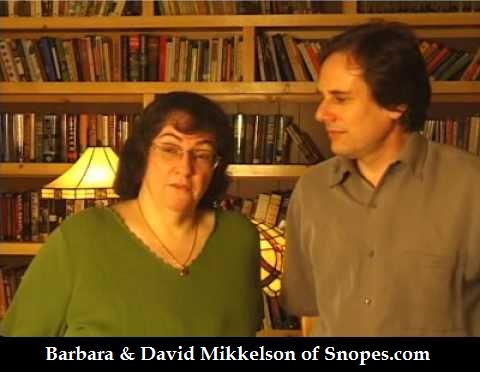 Friday morning, our DCG published this post, “Facebook is going to use Snopes and other fact-checkers to combat and bury ‘fake news’“.

Using Snopes as an authority is laughable. According to independent investigative reporter Wayne Madsen, “The so-called ‘fact-checking’ authentication website Snopes.com is the go-to website for CIA propaganda.”

“On April 19, 2016, WMR reported: […] ‘Snopes.com is run by a California couple named Barbara and David Mikkelson, who founded the San Fernando Valley Folklore Society . . . The Mikkelsons chose the name Snopes because it is the name of a fictional family featured in William Faulkner’s novels that includes a pedophile, a murderer, a bigamist, a corrupt racist politician, and a thief who live in the fictional Yoknapatawpha County in Mississippi. The idea is to label all those targeted by the Mikkelsons as candidates for membership in the Snopes family. […]’

Snopes.com is on record calling WMR a ‘disreputable web site.’ Nothing says ‘CIA’ more than Snopes.com’s description of legitimate news reports of CIA director John Brennan being a Wahhabist and Saudi sympathizer as ‘bogus.’

Snopes’s most recent dissembling of the truth was to discount reports from Greece that Turkey has been shipping weapons disguised as furniture shipments to Islamic State of Iraq and the Levant (ISIL) and affiliated terrorist groups in North Africa and Europe.

Snopes claims that because the story of a Greek Coast Guard interception of a weapons shipment south of the island of Crete dates from 2015, there is no validity to the Turkish connection to weapons shipments to ISIL terrorists. The ship transporting the weapons was the Bolivian-flagged Haddad 1, operated by Delta Sea Maritime of Turkey. The vessel had loaded twelve containers at the Egyptian port of Alexandria, a favorite weapons shipment location for the CIA. The ship, before stopping in Famagusta in the Turkish Republic of Northern Cyprus, loaded another three containers at the Turkish port of Iskenderun, the transit port for the shipment of captured weapons from Muammar Qaddafi’s arms warehouses to Syrian jihadist rebels. It was the Iskenderun transport operation that involved the late U.S. envoy to Libya Christopher Stevens; Turkish Consul General in Benghazi Ali Sait Akin; CIA director David Petraeus; and, reportedly, senior advisers to Secretary of State Hillary Clinton.

The CIA had to commission its favorite Internet disinformation site to throw cold water on the Turkish weapons links to ISIL because it threatens to expose the CIA’s massive weapons smuggling operations to ISIL terrorists that involved Turi Defense Group of Arizona — a case just buried by the Department of Justice on orders of the Obama administration and the Hillary Clinton campaign — and other covert weapons transfers being carried out on the orders of ‘Al Hadj’ John Brennan, veteran of the Islamic ritual pilgrimage to the holy city of Mecca.

One of the CIA’s smuggling operations entailed the Belgian-based arms manufacturer Fabrique Nationale (FN), which has a CIA-connected subsidiary called FNH-USA. One particular FN rifle, the Fusil Automatique Léger (FAL), was the standard weapon used by the Libyan rebels in 2011 and 2012, including the jihadist group that attacked the U.S. diplomatic compound in Benghazi on September 11, 2012. The FAL, called the ‘Right Arm of the Free World’ during the Cold War, uses only NATO standard rounds. The weapon was never used by the Libyan Army, which relied on Soviet weaponry. Claims by NATO that the rebels were using Libyan weapons captured from Libyan army arsenals and caches were patently false.

Snopes is now questioning Turkey’s weapons links to jihadist terrorists in North Africa and Europe. However, photographs do not lie, as seen below. Ammunition and 5,000 shotguns from the Turkish-owned arms dealer Yavex USA were shipped from Istanbul in boxes denoted as plastic office furniture manufactured by the Turkish firm ‘Senyayla Plastik Sanayi ve Ticaret A/S’ of Istanbul. The Turkish government and the CIA had their ‘plausible deniability’ cover story on the intercepted weapons and ammunition ready to go just after the Greek Coast Guard interception: The 492,000 handgun bullets were destined for the Sudanese national police and were to be delivered through the port of Beirut, Lebanon and the 4900 shotguns were ‘hunting rifles’ destined for Lebanese customers. The Haddad 1 was stopping at the Libyan ports of Misrata and Tobruk, according to the Turkish government, to deliver bags of ‘cement mix.’ At the time of the interception, Libya was subject to a United Nations arms embargo.

Yavex’s U.S. subsidiary is located at 6361 Corporate Park Circle in Fort Myers, Florida. It is clear that both Yavex USA, Turi Defense Group, and FN-USA, now called FN-America, were involved in a covert CIA weapons smuggling operation in violation of the UN arms embargoes imposed on Libya, and later, on Syria, with the connivance of Hillary Clinton. Not surprisingly, FN-America operates from a post office box in McLean, Virginia, not far from CIA headquarters in Langley.

What may have possessed Hillary Clinton to destroy thousands of State Department emails transmitted, processed, and stored on her personal servers? Perhaps it was her involvement in a major CIA weapons smuggling operation that saw U.S. and NATO weapons being shipped to jihadist terrorists in Libya, Syria, and Europe. As Secretary of State, Mrs. Clinton had ultimate authority for approving U.S. weapons transfers abroad pursuant to the Arms Export Control Act.

As far as Snopes.com is concerned, nothing they report should be taken seriously. They are as reliable a news source as The Onion.”

According to Wikipedia, the Mikkelsons, a California couple, created the Snopes site in 1995. By mid-2014, the couple had divorced and Barbara Mikkelson had not written for the site “in several years”. So David Mikkelson “hired employees to assist him from Snopes.com’s message board.” Barbara no longer has an ownership stake in Snopes.com.

In other words, we are to believe that one man, David Mikkelson, with “assistants” he’d hired from Snopes’ message board, manages to pump out a steady stream of researched articles every day. If you believe that, I have the proverbial swamp in Florida to sell you.