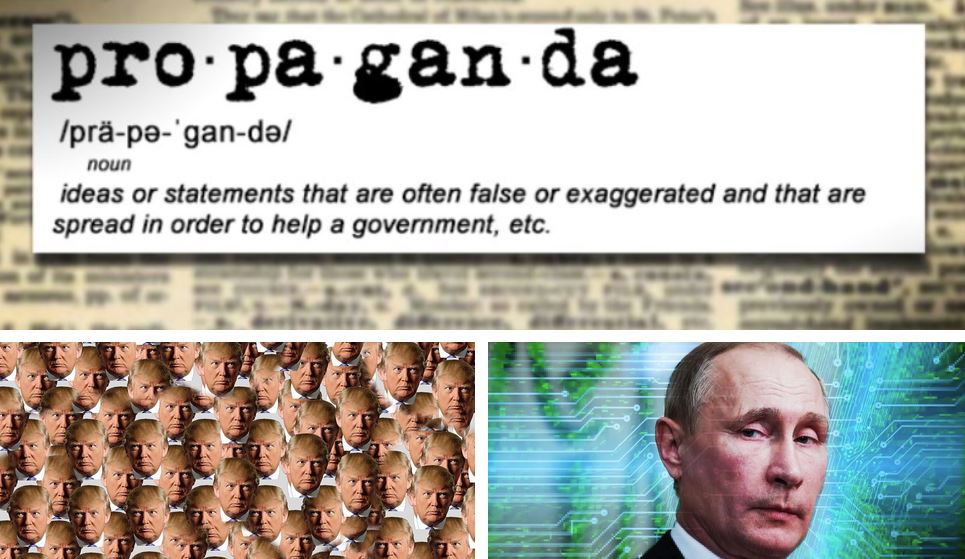 Since the moment the polls closed on November 8, the Western establishment media and their partners in the State and Corporate classes have been working overtime to embed another propaganda-filled narrative deep into the minds of the American public. This operation involves President-elect Donald Trump, the recent fake news meme, and Russia. The goal of the operation? To further divide the American public between Statist, establishment-worshiping minions and principled, critically thinking truth seekers. Let’s take a look at the pieces of the puzzle.

First, I should make it perfectly clear that I am not a supporter of Donald Trump, nor am I a supporter of Hillary Clinton, Barack Obama, Bernie Sanders, Gary Johnson, Jill Stein, or any other politician. As far as I am concerned these people are all a part of the problem. At best they are naive for thinking they can change the system from within; at worst they are actively shilling for the establishment to propagate division and support for the dying system.

Also, I do not buy the narrative that Donald Trump is an outsider who somehow duped both the corporate media and long-term politicos with his victory that nobody claims to have seen coming. Time and time again we have seen that anyone who aims to truly challenge the status-quo is not allowed to win. I say “allowed” because whether you are talking about easily hacked Diebold voting machines, the uselessness of the popular vote, the ever-increasing influence of money on politics, or the outright oligarchy that controls our world – your vote does not matter. Presidents are selected and not elected. For some reason a growing portion of the “alternative” media seems to have forgotten this.

Bottom Line: Trump is the establishment’s “anti-establishment” candidate. He is being used to create division while promoting a false resistance to the true establishment. Either way, Trump’s role seems to be that of the Great Divider. He has been brought on board to say absurd one-liners that can be repeated by the media ad nauseum and create a panic in the half of the population that believes he will launch World War 3. Meanwhile, Trump will betray his supporters by breaking campaign promises like every president before him. Instead, he will bring about more of the same old game we have seen played through the Obama, Bush, and Clinton regimes. Trump gets the privilege of running his mouth with controversial statements (whether he means them or not) while the media is happy to repeat everything he says.

If Trump is the establishment’s wolf in sheep’s clothing, the Fake News meme is the establishment’s tool for distraction and division. Since Trump was declared the winner, the corporate media (read: actual fake news) has pushed story after story claiming that government insiders have evidence that the Russians interfered with the U.S. elections by propagating fake news stories that favored Trump and attacked Hillary Clinton.

The Washington Post and other mouthpieces for the establishment ran with a report from the organization PropOrNot which claimed to identify websites that were spreading fake news and quite possibly working as Russian propagandists. The list contained Activist Post, Mint Press News, The Free Thought Project, The Anti Media, and many other independent media outlets. Essentially, the corporate media is repeating baseless accusations in an attempt to demonize both Donald Trump and his supposedly unexpected victory AND Russia.

This feeds back into the love/hate Trump loop, further dividing Americans. Those who hate Trump feel justified in their discontent and are happy to buy media lies about Russian interference in the election and fake news spread by uneducated Trump supporters. On the other side of the fence, Trump supporters feel justified in their distaste for the corporate media and their apparent “anti-Trump bias.” The media’s focus on Trump and repetition of unconfirmed rumors from unnamed government sources fuels the anti-establishment mood of the pro-Trump camp.

Again, I stress that from my analysis I have concluded that Trump is a part of the program. He is keeping the people divided and distracted while the American public fights about the veracity of their news, and the government searches for ways to begin regulating independent journalism while pretending to care about truth.

Bottom Line: The Fake News meme is being used to attack independent media that offers an alternative take to the party line. It also happens that the fake news meme serves as a way to divide Trump supporters and critics, as well as point a finger at Russia.

Throughout the election process the corporate media made references to Donald Trump’s apparent friendship with Russian President Vladimir Putin. As part of the never-ending Cold War era mentality, Americans are taught that all things Russian are evil and that any American who dares to support or cooperate with Russian officials may be a Russian agent, if not simply a bad American. The corporate media also repeated claims that Russia was behind the hacks of the Democratic National Convention that led to the leaking of emails from Hillary Clinton’s campaign chairman, John Podesta. Once WikiLeaks began releasing the Podesta Leaks and subsequently damaging Hillary Clinton’s reputation, the corporate media stated that the leaks were probably fake or compromised, and that Julian Assange was likely a Russian agent.

However, the big push to connect Trump to Russia has come in the days since the election. First, on December 9, The Washington Post claimed that a CIA analysis has proven that Russia did indeed interfere with the U.S. election in order to help Trump get to the White House. As of the writing of this article, U.S. officials are now reporting that Putin himself directed the hack against the DNC. Again, none of these claims have been independently verified, but they have led to more calls for investigations and a possible change of vote by the Electoral College.

The alleged interference from Russia has also helped pass legislation specifically aimed at combating foreign propaganda. Or at least that’s what the corporate deadstream media would have you believe. The Countering Disinformation and Propaganda Act was recently passed as part of the yearly military budget known as the National Defense Authorization Act. If the NDAA sounds familiar it’s likely because it is the same bill that President Obama signed in 2012 authorizing indefinite detention of American citizens who are suspected of “terrorism.”

The Countering Disinformation and Propaganda Act claims that its priority is “developing a whole-of-government strategy for countering foreign propaganda and disinformation. The bill would increase the authority, resources, and mandate of the Global Engagement Center to include state actors like Russia and China in addition to violent extremists.” The bill also aims to “counter foreign disinformation operations and proactively advance fact-based narratives that support U.S. allies and interests.”

Despite the deceptive language, it is clear that the establishment wants to delegitimize any independent media or opposition as simply puppets of Russia or other foreign governments. The parasite classes are then able to keep the population divided and fighting over whether or not Trump is a legitimate president or an agent of the Russians.

Bottom Line: The establishment political class, media, and corporate partners are working overtime to convince the American public that WikiLeaks, Donald Trump, and the independent media are simply pawns of the Russian government.

Conclusion: By spreading the fake news meme the elitists behind the American power centers are able to attack growing independent media icons by painting them as propagators of false Russian propaganda. The media is also using this fake news meme and Russian prop to accuse Trump of being an illegitimate president, further playing into the “Trump is an outsider” narrative. All of this is being done with the goal of keeping the domestic front as divided as possible while selling the brainwashed masses into another war. Coincidentally, all of this non-sense is taking place while the corporate media spreads lies about Syria and Russia.

Trump is the Great Divider, playing his role to keep the people fighting while the parasite classes take down independent media and sell the American public into a proxy war with Russia. Will you allow this game of deceit and misdirection to lead you down a path of ignorance, jingoism, and death?