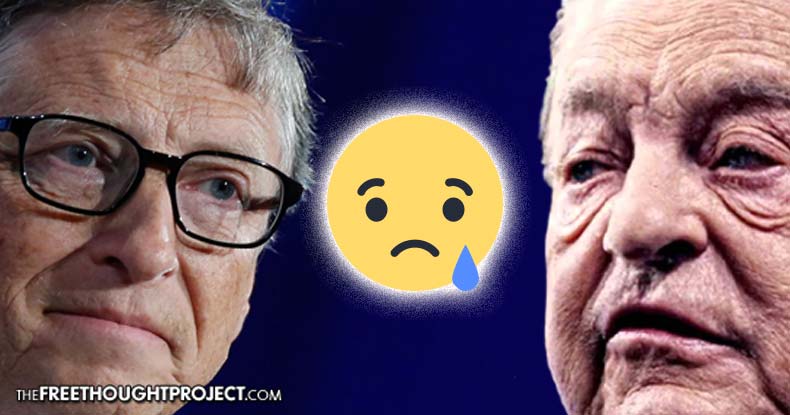 After controversy erupted over Facebook’s plan to use left-leaning, liberal fact-checking organizations to flag “disputed” news — as part of the wholly vapid and unnecessary war on “fake news” — additional information has emerged that won’t quell the public’s misgivings on the situation. Billionaire globalist George Soros is among several liberal ‘luminaries’ funding the social media platform’s latest foray into soft censorship of dissent.

On Thursday, CEO Mark Zuckerberg announced the plan to combat fake news — incidentally, an issue he wasn’t concerned about until the left establishment applied pressure — but was met with consternation and outrage from constitutional rights advocates, alternative media, and right-leaning media for the singular viewpoint of the ostensible fact-checking organizations.

Indeed, Facebook’s announcement it would use third-party fact-checkers from the ‘trusted’ Poynter Institute should have sounded even louder alarm bells, as Poynter receives funding from Soros’ Open Society Foundations, Google, the Craig Newmark Foundation, the Bill & Melinda Gates Foundation, the Omidyar Network, and other extreme left groups.

EBay founder Pierre Omidyar has donated over $30 million to the Clintons and their charities; the Gates have given the Clinton Foundation no less than $25 million; and the loathed George Soros — who donated an unprecedented $27 million to defeat George W. Bush in 2004 — reportedly spent over $25 million on Hillary Clinton and other Democrats this election cycle.

In short, these entities who will be deeming articles legitimate or “disputed” are anything but unbiased. As the Ron Paul Institute notes:

“Never fear. A group of selfless and unbiased philanthropists have stepped forward to offer millions of dollars to assist these ‘fact-checkers’ in their efforts to ferret out and disappear anything they determine to be ‘fake news.’ It seems rather curious, however, that these donors are all in fact in one way or other completely beholden to Hillary Clinton and the left-interventionists of the Democratic Party.”

As admittedly right-slanted Breitbart pointed out, “On Monday, just days before the announcement of the Facebook partnership, Poynter issued a press release revealing that Newmark donated $1 million to the group to fund a faculty chair in journalism ethics.”

“The gift will support a five-year program at Poynter that focuses on verification, fact-checking and accountability in journalism. It’s the largest donation Poynter’s ever received from an individual foundation.

“The Newmark Chair will expand on Poynter’s teaching in journalism ethics and develop certification programs for journalists that commit to ethical decision-making practices. The faculty member will also organize an annual conference on ethics issues at Poynter and be a regular contributor to Poynter.org.”

Zuckerberg’s plan will at first entail fact-checking by Politifact, Snopes, FactCheck.org, the Associated Press, and ABC News, with the option to rope more outlets into the effort in the future. But as the Ron Paul Institute reports, the bias in these groups — and their penchant for reporting false information — is astonishing:

“One problem: these organizations themselves are among the biggest purveyors of real fake news! PolitiFact has a whole website dedicated to exposing the organization’s biases. The popular site Snopes is in fact run by a husband and wife out of their home in California. Neither have any background in research or investigative techniques — they just use Google to make their determinations. As for AP and ABC News — they are mainstream media outlets with no clean hands when it comes to propagating fake stories. In fact the Associated Press has a long history of coordinating with governments to produce fake news.

“Political fact checking is not a science. On the contrary, more often than not it carries with it all the biases of any hyper-partisan organization.”

That point should not be overlooked — because as Facebook claims to be combating ‘fake news,’ employing organizations like the Open Society Foundations, Snopes, Google, and, particularly, Politifact in the plan evince the underlying motivation to further an establishment-left agenda — not combat actual, false reports, at all.

In fact, by using the International Fact-Checking Network (IFCN) — funded by the Poynter Institute, and thus Soros, Gates, and the others — Zuckerberg is committing to liberal bias in Facebook newsfeeds and foregoing the last shreds of open idea-sharing the platform originally claimed to embrace.

Although the left often downplays the role Soros plays in global events, his alleged fingerprints in the affairs of nations from the Ukraine to Macedonia to the United States show little more than a pattern of self-interest and profiteering disguised as concern for the public interest.

“Soros has earned his megafortune in part by short selling currencies and causing economic crises. He is credited with breaking the pound on September 16, 1992 in a day that became known in Britain as ‘Black Wednesday.’ He reportedly made $1.2 billion from that crisis. In 2002, he was convicted for insider trading,” Breitbart’s Aaron Klein reports.

With clear favoritism for the left now on display, many conservative press organizations and alternative media outlets, whose bias largely doesn’t represent a particular ideology, have begun discussing leaving Facebook for any social media platform whose running modus operandi refuses censorship of any stripe.

It would behoove the U.S. populace to recognize the war against ‘fake news’ has nothing at all to do with actual fabricated reports and everything to do with funneling thought into one, accepted frame — that of the Democratic establishment.

Facebook, Soros, the Gates’, and Clintonites are trying to make acceptable the idea of spoon-feeding information, and the packaged narrative of news being somehow ‘fake’ does the job handily.

But losing the choice to view competing and sometimes unpleasant viewpoints is the steepest price to pay for the convenience of not being tasked with researching items on your own — and it’s the slipperiest of slopes in an increasingly authoritarian State.