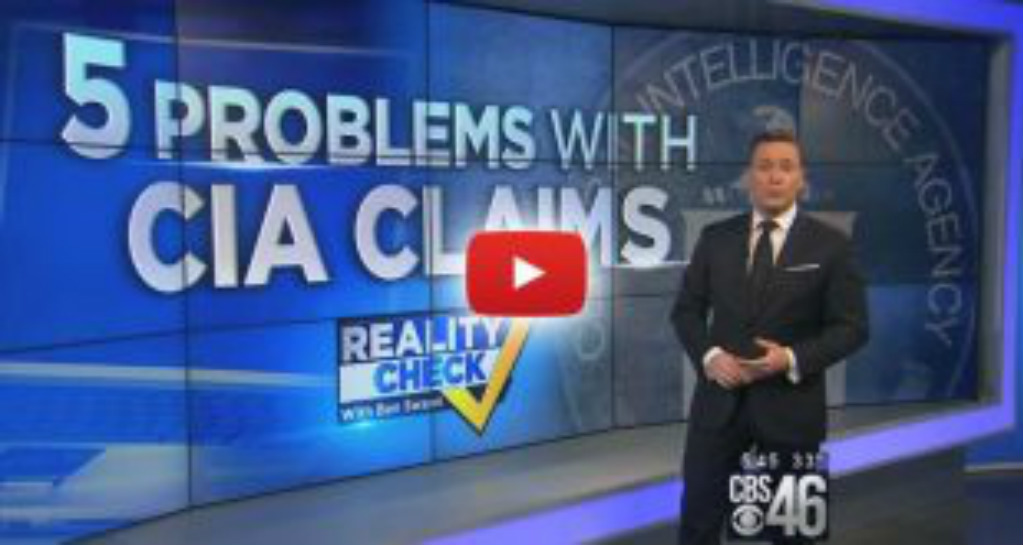 When unnamed officials with the CIA recently claimed Russia hacked the U.S. presidential election, but failed to provide any evidence, suspicions immediately circulated that the allegation constituted a fabrication — particularly as left-leaning corporate media unquestioningly parroted the story.

This, after the Washington Post first tried — and miserably failed — to convince the U.S. populace professional Russian propagandists were running nearly every alternative and independent media outlet, and had plotted to smear Hillary Clinton to ensure Donald Trump’s victory.

In tandem with the ratcheting up of anti-Russia propaganda by the left political and media establishment has been the equally laughable war on putative fake news, because — according to Clintonite Democrats and a smattering of Republicans — fake news also helped Trump win.

Of course, the irony in all this is the mainstream media’s articles on the CIA’s claims and allegations of Russian meddling are the exact sort of fake news which threatens to do actual, physical, palpable damage — whether by crushing dissent or instigating war with the U.S.’ old Cold War foe.

Fortunately, alternative media — sans any paychecks from President Putin — and a few journalists with integrity have brilliantly torn through the American propaganda machine to shine the light of truth on claims of Russian hacking.

One mainstream journalist, Ben Swann — who frequently breaks ranks with the corporate-approved narratives proffered by his colleagues — offers a much-needed Reality Check on the situation.

Swann notes there are five, specific problems with the CIA claiming Russia hacked the Democratic National Committee and Clinton campaign chair John Podesta’s emails — worsened, he says, because “most media” isn’t “actually asking for evidence of these claims.”

The CIA, he explains, did not formally release a report about Russia’s hacking — rather anonymous sources inside the agency allegedly leaked the “conclusion” to the Washington Post and New York Times. This is highly problematic for obvious reasons, not the least of which is the near impossibility of verification — both of the sources and the information.

According to the Post, who first reported the story, “The CIA has concluded in a secret assessment that Russia intervened in the 2016 election to help Donald Trump win the presidency, rather than just to undermine confidence in the U.S. electoral system, according to officials briefed on the matter.

“Intelligence agencies have identified individuals with connections to the Russian government who provided WikiLeaks with thousands of hacked emails from the Democratic National Committee and others, including Hillary Clinton’s campaign chairman, according to U.S. officials.”

Leaking this supposed information to the corporate press might indeed represent the easiest way to launch propaganda without the burden of proof — proof it most likely lacks.

As Swann explains, this absence of evidence — and that the sources remained anonymous — means there “is no one accountable to provide that proof.” No politicians or other media outlets have any way to verify claims printed by the Post and Times.

Indeed, the CIA could be considered notoriously mendacious, and has made public claims that have been proven untrue. For one, Swann notes, “the Senate Intelligence Committee blasted the CIA in 2014, for an ‘ongoing culture of misinformation,’ which they said has undermined the public’s trust in America’s Intelligence leadership.”

Senator Ron Wyden, quoted by Swann, said at the time, “That trust has been seriously undermined by senior officials’ reckless reliance on secret interpretations of the law and battered by years of misleading and deceptive practices” within the CIA.

An easy second example concerns the CIA’s torture program as exposed in a four-year study by the Senate which found the agency repeatedly lied about the use of brutal techniques and more.

Swann’s fourth problem of note surrounds a little-discussed fact from the Post’s article — even CIA investigators don’t unanimously agree on the assessment Russians hacked those systems. Reported the Post:

“A senior U.S. official said there were minor disagreements among intelligence officials about the agency’s assessment, in part because some questions remain unanswered.”

“Well, what does that mean?” Swann asks. “What are those disagreements? And without providing that information, how can we trust these disagreements are actually minor, since that’s, of course, a relative term?”

Indeed, considering these CIA ‘officials’ felt the need to remain anonymous lends credence to the idea the discord is anything but minor — but we have no way of knowing for certain.

And that brings us to the fifth problem: The one person with the most intimate knowledge about the DNC and Podesta files, Wikileaks founder Julian Assange, has repeatedly asserted the information was leaked from the inside, not hacked at all — and certainly not by Russians.

In fact, former British Ambassador to Uzbekistan Craig Murray — a close friend of Assange — recently said “he has met the person who gave the DNC emails to Assange and to Wikileaks, and he says it is not the Russians,” Swann explains.

“I’ve met the person who leaked them, and they are certainly not Russian and it’s an insider,” Murray said. “It’s a leak, not a hack; the two are different things.”

Just because a report sounds official coming from the CIA does not give it instant viability — and the allegation Russian agents hacked the system is too shaky to stand on its own.

Swann concludes, “So what you need to know is that on top of all of these questions is one fundamental issue that everyone is missing: The claim is that Russia decided to hack the election — not by altering voting results — but by making public actual emails from the Clinton campaign and the DNC.

“Look, I have said this before and I will say it again: how bizarre is it that the argument is not that the Russians were trying to influence the election through lies or electronic voting; but, rather, the claim — if you really boil it down — is that the Russians swayed the election for Donald Trump by revealing the truth about the Clinton campaign and the truth about the DNC.”