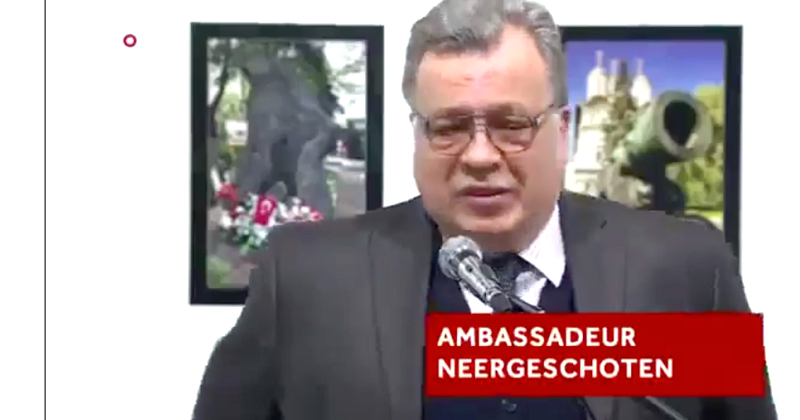 Apparently I have been doing this too long. This morning I expected to see a barrage of stories about the obvious false flag assassination of a Russian ambassador.

No such stories were to be found.

Honestly I just want to go back to bed, because I feel like a lone voice in the wilderness.  I am starting to feel like my life’s work is a failure.

There truly is no such thing as fake news in this world. Too often the alt media latches on to false stories of the main stream and makes them real. In my opinion this is one of those stories. So this story essentially becomes real news whether it is true or not, because the consequences will be real and those consequences may include World War III.

Likewise, the truthful stories that are broadcast by alt media, more often than not, never see the light of day. The establishment is censoring free speech and silencing dissenting opinions. This is the plan. People thinking for themselves is not an option.

Facebook and Google have nearly put most alt news sites out of business and things are not getting better in the foreseeable future.

So what do you think about this Russian ambassador that was just supposedly assassinated?

Is it not odd that the production conveniently caught his facial expressions as the bullet(s) made impact? I can somewhat understand a close up at that moment by someone who might have been filming the ambassador’s comments, but…

Is it not the least bit odd that the individual kept filming, and had the presence of mind to zoom out (to reveal the gunman), rather than choosing to immediately seek safety?

Would you not be concerned for your safety?

How is it that they always get these videos into wide circulation so quickly? All media and government agencies seem in a rush to show the people what happened when a Russian ambassador is gunned down, but if it is someone like Lavoy Finicum we wait for weeks to see a video.

Could the explanation be the agenda of the agencies/media outlets releasing the videos?

Of course it could.

From Jihadi John and his fake beheadings to the live on-air killing of two news crew members supposedly filmed by the gunman, these elaborate productions are just what the doctor ordered to dupe the average person into buying the mainstream narrative and agenda.

I believe this is just the latest example.

They only sell these stories because they allow you, the viewer, to believe what you want to believe.

People die in false flags all the time. Suggesting a false flag does not mean proposing an event did not happen or that people did not die. It is rather suggesting that the event likely happened with more planning, usually by dark government forces, and less spontaneity than is being portrayed. It is a “false flag” not because it did not happen, but because it supports and advances an agenda of those in positions of power (who benefit by gaining more power). It simply means that there is much more to the story than first meets the eye. The mainstream narrative can not be trusted

This was not likely about a simple rogue cop. I’m sure it goes much deeper than that.

So are those behind this moving us closer to World War III?

And are the Russians and Turks secretly on the same page here?

That is my belief. And don’t rule out that our government may have played a hand in this as well.

You can believe what you will.

I’ve already spent too much time on this today. Maybe you think I’ve flipped my lid. You wouldn’t be the first to make that assessment.

Either way what follows will likely not be good for Russia, Turkey or anyone else. My belief is that it’s just more of the same old “good cop, bad cop” routine that world governments are notorious for. But what I think really does not matter, because even fake news becomes real when enough people believe it, and this would appear to be the case with the killing of this Russian Ambassador.

My Facebook newsfeed was flooded yesterday with comments on this event and I actually believed it all until I saw the video for myself.