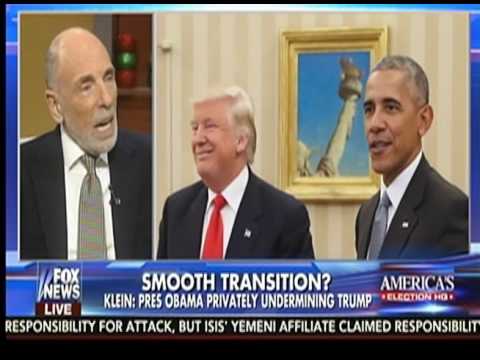 (INTELLIHUB) — Author Ed Klein recently appeared on Fox and Friends Weekend to discuss a startling theory that involves Obama working behind the scenes to retain power and oppose the Trump administration.

According to Klein, it looks as if Obama is setting up shop for a sort of “shadow government” in Washington.

“For the past 100 years every president who is outgoing has packed up his stuff, gone home and not criticized his successor. This is not what the Obamas are planning to do,” Klein stated.

“They rented an eight-bedroom mansion in the Kalorama section of Washington from Joe Lockhart, who is Bill Clinton’s last press secretary. In that house there’s enough room for Valerie Jarrett as well as Michelle and the kids. A place for ten cars to park. They are setting up what they are calling a shadow government,” continued Klein.

Interestingly, Klein’s claim correlates with already documented attempts by President Obama to attack the incoming administration as well as moves to stay in power.

This also come at a time when numerous leftist groups shift their strategy towards attacking alternative media and laying the groundwork for direct opposition to President Trump for years to come.