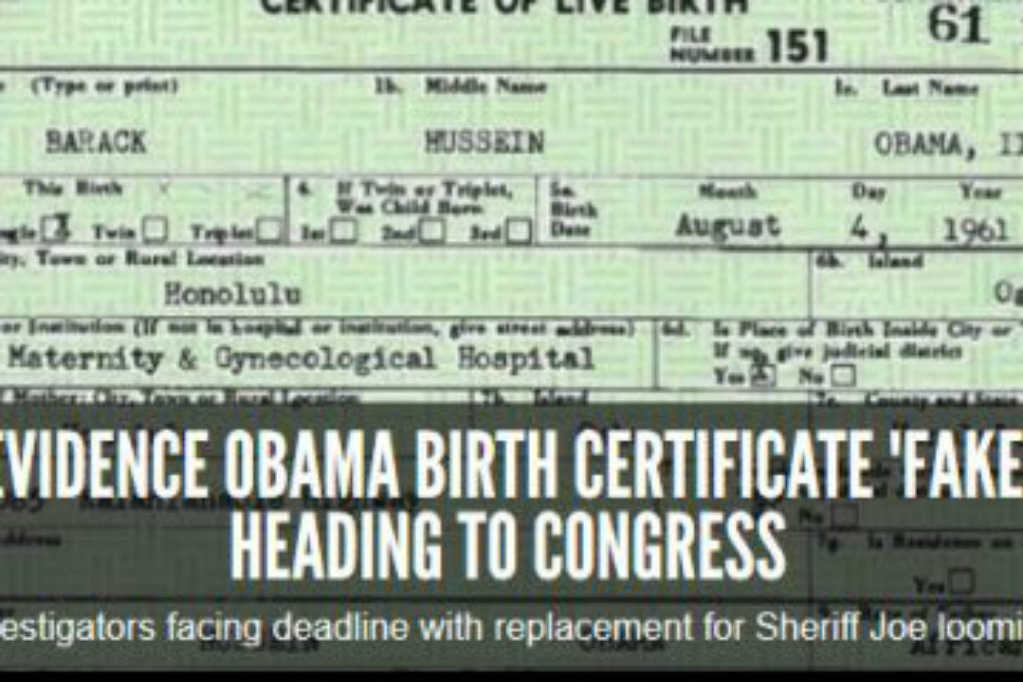 In 2012, Sheriff Arpaio sought to present the evidence that he and his Cold Case Posse had determined to be significant in determining that Obama’s birth certificate was indeed a fraud to delagates to the Republican National Convention. In 2014, lead investigator Mike Zullo said that some members of Congress were paying attention to the investigation.

However, like many political figures in DC, they either don’t care or they were more concerned with their own political aspirations than upholding their constitutional duty which might make them look unfavorable to their peers.

Now, Bob Unruh is reporting that there is a rush to get the evidence in the hands of Congressmen in light of Arpiao’s exiting the Sheriff’s office at the end of the month and Donald Trump entering the White House in January.

Evidence that the document presented to the American public by Barack Obama as his Hawaiian birth certificate is fake soon will be heading to members of Congress, and the difficult discussions over what crimes may have been committed and what should be done could begin soon.

The atmosphere in Washington will be different under Trump, who will be inaugurated Jan. 20, since he publicly questioned Obama’s birth certificate in 2011. During this election season, he stated he now believes Obama was born in Hawaii.

But at a news conference Thursday, Maricopa County, Arizona, Sheriff Joe Arpaio, the only law enforcement officer to formally investigate the allegations of fraud, presented evidence that the image of the birth document posted by the White House was fraudulent.

One thing seems certain: The evidence will have to go elsewhere for action to be taken, since Arpaio, known as “America’s toughest sheriff” and innovator of such jail amenities as pink underwear and surplus Army tents in the desert heat for jail inmates, is leaving office Jan. 1 after more than two decades serving Phoenix-area residents, who had asked him for the birth certificate investigation.

“I plan on turning over this investigation this month to the federal government,” said Arpaio. “And Congress. And hope Congress No. 1 will pass a law, the president should be vetted. Common sense.”

Barack Obama’s own attorney, Alexandra Hill, pretty much admitted the document was fraudulent. In her appearance in a New Jersey courtroom to argue that Obama was eligible to be on the ballot back in 2012, Hill argued that the online birth certificates was “irrelevant to his placement on the ballot.” She then went on to try and establish his eligibility by speaking of his political popularity, not legal qualification, in order to be a candidate!

Even the Kenyan government heavily documented in its own records that Barack Obama was born in Kenya! In wanting to congratulate Obama on his first victory in 2008, the Kenyan Parliament recorded these words:

Unruh also points out many other documents that Obama has never publicly released.

So, it’s time for the GOP to put up or shut up concerning the upholding of the law concerning fraudulent documents, especially those perpetrated on the chief law enforcer. If they are allowed to ignore this again, as far as I’m concerned, they are and have been complicit in the lawlessness of every single usurpation of the Constitution by Barack Obama and those in his administration. However, I’m sure they have been complicit. The question is, will the American people have such a loud voice to demand justice for the crimes against them?