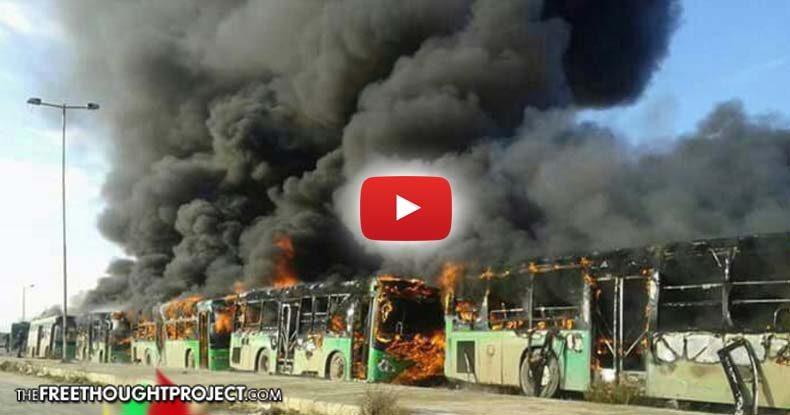 Revealing exactly how moderate the U.S.-backed rebel opposition in Syria is, often called the “moderate rebels” in western corporate media, these Islamist terrorists showed the world how they have held the city of Aleppo captive for the past 4-years – with violence, intimidation, and death.

A reported 25 humanitarian buses sent to transport sick and injured from the war-ravaged Syrian villages were attacked and firebombed en route by the “moderate rebels.” Five bus drivers were taken hostage and three more were killed, according to Bashar Ja’afari the Permanent Representative of the Syrian Arab Republic to the United Nations, who spoke during a press conference at the UN on Monday.

The attack halted the efforts by the Syrian government to evacuate besieged areas in an effort to alleviate a growing humanitarian crisis. While the narrative in western media is that Assad forces refuse to allow humanitarian aid into Aleppo, video footage reveals that the U.S.-backed insurgents in Syria are the ones stopping the humanitarian assistance with their continued brutality.

Keep in mind that these are the alleged “moderate rebels” being supported by U.S. tax dollars.

Here are burnt busses of regime and #Iran. They were burnt to return honor of #Aleppo. Wake up Islamic Umma pic.twitter.com/ifiJZlTqyp

Even mainstream western outlets such as the BBC, which constantly pushes western propaganda, were unable to account for the brazen actions of the Islamist forces.

According to a report by the BBC:

Several buses en route to evacuate the sick and injured from two government-held villages in Syria’s Idlib province have been burned by rebels.

The convoy was travelling to Foah and Kefraya, besieged by rebel fighters.

Pro-government forces are demanding people be allowed to leave the mainly Shia villages in order for the evacuation of east Aleppo to restart.

Unlike the numerous western claims of genocidal atrocities in Aleppo, which lack any photographic or video evidence of alleged atrocities committed by the Syrian Arab Army (SAA), Twitter has exploded with graphic evidence of the attack on the humanitarian bus convoy.

Those wondering what happened to drivers of the burnt busses now have their answer according to #Syrian opp activist pic.twitter.com/Bz9y5bgl7P

The problem is that the western media has consistently parroted the government line about moderate rebels so many times that they have utterly failed to identify that there is little working difference on the ground in Syria between the Free Syrian Army and the Nusra Front. These are simply distinctions to allow for the transfer of weapons and funding to one group, which then distributes these assets to their affiliated forces on the ground.

So, when the Assad government labels all forces opposed to them as terrorists they are essentially telling the truth as there is a collusion between these groups in a concerted, U.S.-backed, effort to degrade and remove the Assad government. Make no mistake that there was, at one time, a real homegrown insurgency against the Assad government, by his own people, but that movement has long since been hijacked by foreign governments and Islamist jihadis, both of which have an agenda to decide the next ruling power in Syria.

Since the ‘moderate rebel’ bus attack, more buses have been routed to evacuate people, and the humanitarian evacuation has resumed. Dr. Ahmad Dbis, who leads a team of doctors and volunteers coordinating relief efforts, told AFP, that an initial 20 buses arrived in eastern Aleppo, followed by another 20 only hours later.

The next time someone tells you about the brutality of Assad be sure to point out that there are no blameless parties, and the show them this evidence of what the “moderate rebels,” supported by U.S. dollars, are doing to people trying to provide humanitarian aid in Syria.

If Americans understood who they are supporting in Syria, almost all support would cease immediately. Sadly, the 4th column as an independent force has been so thoroughly neutered by their oligarchic masters, that they no longer are watchdogs of government corruption, but rather act as an unofficial propaganda wing of the government itself.

As Malcolm X one warned,